It was fortunate that I discovered a new webcam for Rovaniemi on this day. After having spent the whole night out at below -30 C temps waiting for diamond dust to rise, and which never happened, I called it quits in the morning and was at bed 8 am. But I set the alarm for 11 am to check the webcams if things had changed. The sun was already reaching 2.5 degrees above the horizon at midday, which was starting to make solar display a realistic prospect.

Nothing had changed. There was no diamond dust visible in the three ski center cameras, nor elsewhere in the city. It was totally dry. But as I was about to close the browser and continue sleeping I happened to chance upon a Rovaniemi webcam that I had not known about. And it had a diamond dust display going on. Moreover, I thought of seeing an upper 24° plate arc in it.

I was out quick. When I come to my apartment from a halo hunt session I just throw my clothes in one pile on the floor. If I have to suddenly leave for another round, like now, they are readily arranged to get dressed fast. Five minutes and I am out.

Of course I then wasted too much valuable time looking for a place to photograph, making stupid navigating decisions. Yet I managed to get some photos: 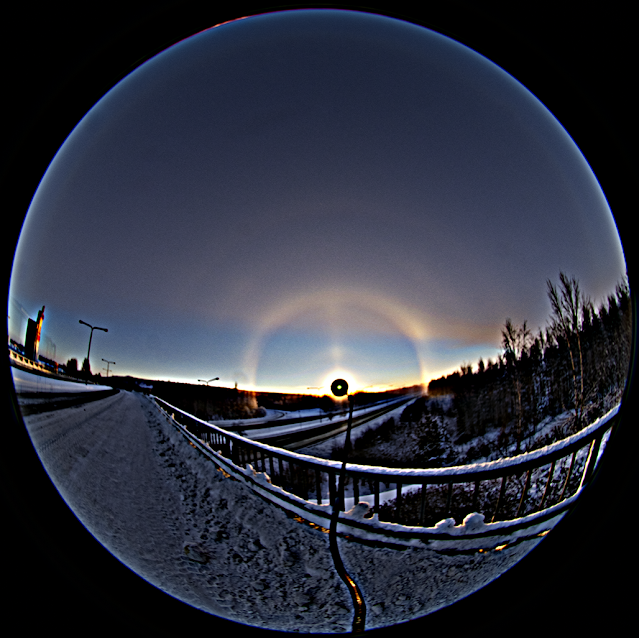 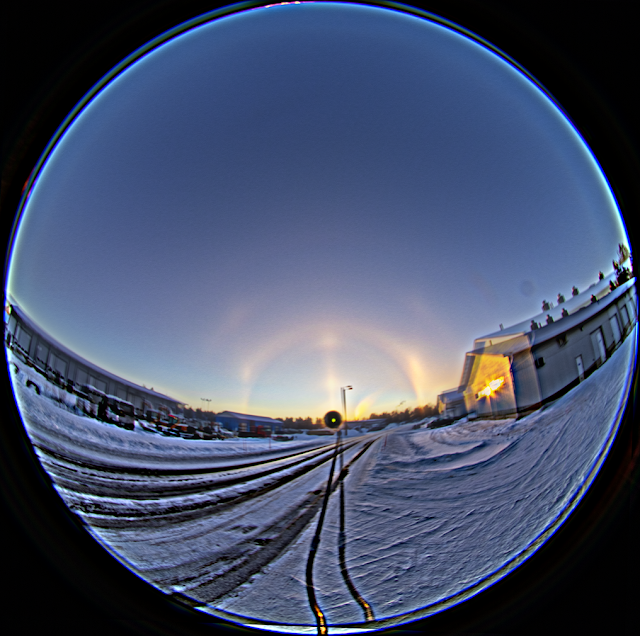 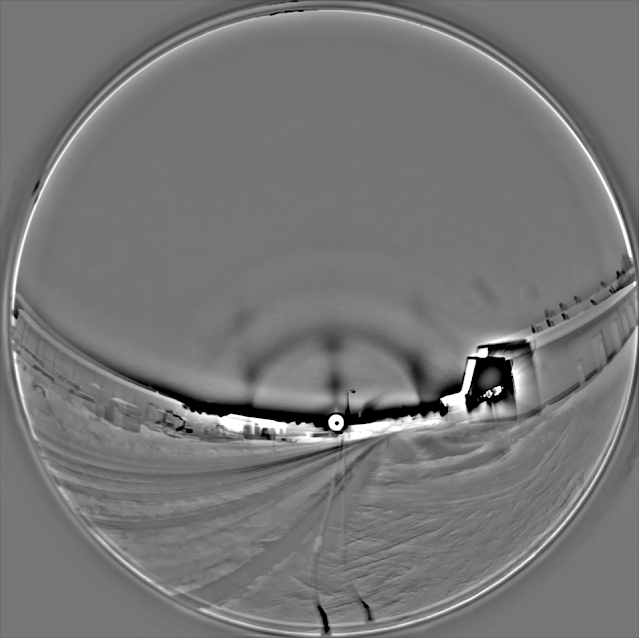 Second and the best set. This stack has 104 photos taken during 5 minutes. Sun elevation 2.3 degrees.

The strong 20° upper plate arc got me looking for the upper 35° plate arcs, and I think I also saw them on the camera display. But I couldn't be sure whether or not I was seeing them with my eyes. Sometimes I though of seeing, the next moment not. To my chagrin I had forgotten (yet again) the convex mirror at the apartment.

But in the end I did happen to get an unquestionable visual of the 35° plate arcs. Not on the upper arcs, but on the lower ones made of glittering crystals against the ground. At first I was wondering why there is a 22° lower tangent arc, but soon realized it is of course the lower 20° plate arc. And at that point I caught also the 35° plate arcs flanking it.

This happened when the display had already markedly waned, with no odd radius halos in the sky visible to the eye. So these against-the-ground versions must probably be considered something of an easy catch in odd radius displays. I regret of not looking for them earlier, especially when I was taking the first photos on that bridge.

This is by no means the first account of 35° plate arcs observed this way. Walt Tape writes in his 2006 book with Moilanen the following on page 152: "In low level displays in Fairbanks we do sometimes see the lower 35° plate arcs below the horizon, showing up as concentrations of sparkles between ourselves and the ground, sometimes in the space of only a few meters."

While there is nothing special about this Rovaniemi display as such (we all know the Chinese routinely catch similar displays in high clouds spiced up with 28° arcs), the conditions that birthed it got me puzzled. My initial webcam survey that snow guns were not giving anything was actually right. As I arrived to the scene, I could see there was no cloud whatsoever growing out from guns. This display was made by the city main power plant, which grew an extensive cloud. Given that snow guns should by all experience be superior diamond dust makers, spewing out nuclei that themselves are ice, it beats me how this is possible. How can the guns fail but power plants work? I have no answer, but this is not the first time to have encountered such an anomaly. In 2017 there was a display that was formed by another, smaller power plant in the Saarenkylä area, and the guns were giving nothing at the same time.

I finish with some words on the performance of camera used, Canon EOS 80D. Olli Sälevä, a colleague here in Rovaniemi, lent it to me after my 40D broke. Because I had already placed an order for the same camera, I was horrified to see color banding artefacts reminisicent of those from the Nikon 3000 series cameras. It appeared the issue was not nearly that serious, though. Jari Luomanen, who took a look at one of the raws, pointed out that the artefacts change location according to the color temp. So they are not a property of image files, but rather something made by the editing software. You can play with color temp to move color bands to a position where they don't disturb so much or, better, stack the images with different color temps to largely wash them out. Of course, the latter increases significantly the after processing work burden, but at least it is relief to know they are not a fixed property of the files. The images below demonstrate these issues. There is also a comparison that shows how two softwares place the color bands differently in the image. 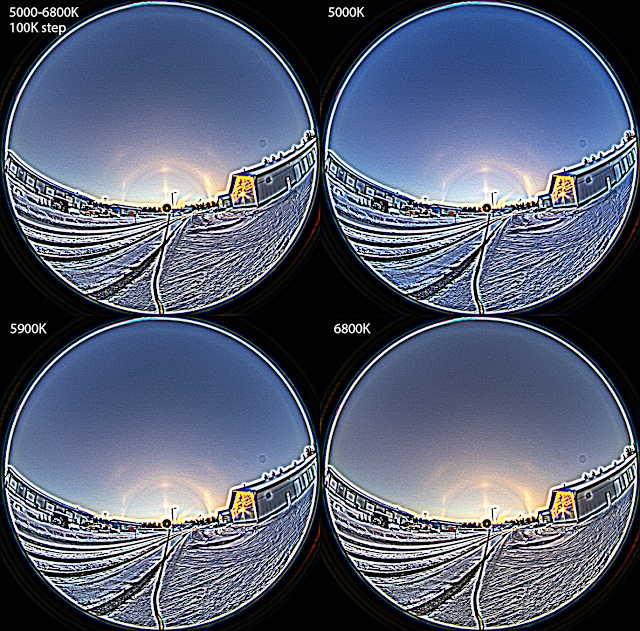 These stacks show how the colored artefact band moves upwards with increasing color temp. The upper left image is an average of color temps in the indicated range at 100K steps. This works quite well to wash out the artefacts. Double usm. Photoshop 2021. 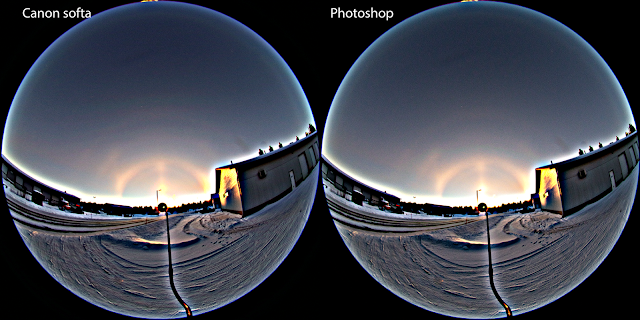 Comparison with Canon Digital Photo Professional 4 and Photoshop 2021. The former has several artefact bands while latter has one broad band. A one time heavy usm was given for both images in the Photoshop.
In general, it would be great to see people give little reviews of their cameras in this blog. As of now, buying a halo camera is basically a jump in the dark. Having experiences shared here could avoid some frustrations. I already know from my own trials that Nikon 3000 series is a stay-out, and the same seems to be with 5000 series. The best camera for halo photography that I know is the one that Nicolas Lefaudeux had for his automatic halo camera in Paris. When I look at the images on his page, I don't see any banding artefacts. It soothes the soul to look at those images.
Posted by Marko Riikonen at 13:57