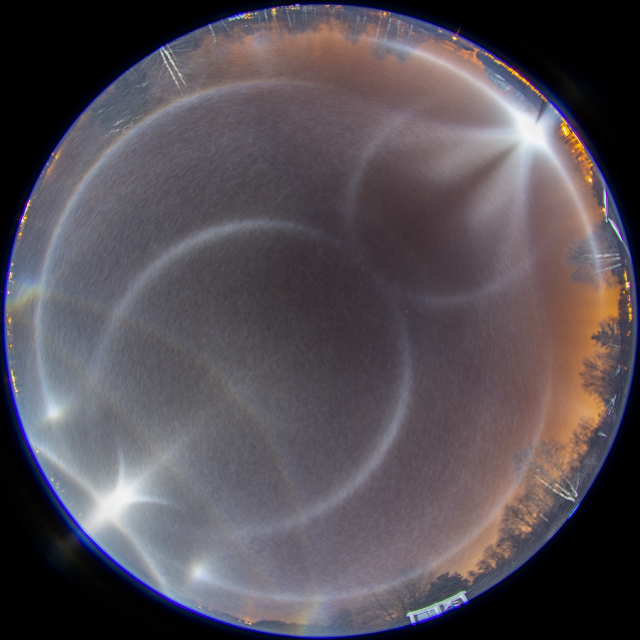 Here is yet another column dominated display in Rovaniemi. It was pretty stable, giving me the longest stack this winter, 31.5 minutes (63 x 30s).

When I arrived at the slopes, the diamond dust was slightly elevated and the pillars that were visible on this crystal stream didn't reach to the ground. But it seemed like some kilometers to the east, on the north side of the river Kemijoki, the swarm was coming down to the ground.

As I drove towards that approximate location, a foggy scene ahead became visible and upon diving in streetlights birthed great parhelia and tangent arcs. I got out of the car and asked a passer by who was coming my way on the sidewalk if there is an access to the riverfront. Luckily, such a place was very close: the next road off back towards the city took me to a tiny public swimming spot where I could start photographing.

The long duration gave plenty of time to enjoy the display also visually. While my camera is often pretty close to the lamp, say, at 15 to 20 meters, that's no good for the visual. That close it is harder to distinguish the halos because the glitter, although bright, is too sparse.

When you go further the volume of the lit area increases and the display solidifies until a point is reached where it is almost like you were watching a classical display. The problem, though, is that the more you take distance the more the beam shoots overhead when the lamp is below horizon, and you will see only a segment of the display.

Even so, it is quite all right. This time, as I took distance to lamp, I really paid attention what was seen. The subhelic and Tricker arcs were solid and awesome. Then I started looking for something that I had already planned to look for, and which I had not yet seen visually: the "column 351, 361", which is a halo related to the 46° supralateral arc, and which in the image looks like the 46° supralateral arc – a 46° supralateral arc for the subsun, if you will. After a little brain haze about its location, I spotted it. An unmistakable solid arc – faint but distinct. Seeing it with my eyes after having first photographed it in 2008 this was the highlight of the night.

I am starting to think that I should place also the camera further away in the coming up displays to get the benefit of more solid display even if the glints are dimmer further away. I used to do that back in 2007-2008 when I started spotlighting. Just a few photos in the stack gave a nice display.

With a lamp of given brightness, there must be some sweet spot distance where the competing benefits of the brighter glints nearer to the lamp and increased lit volume further from the lamp come to an optimal balance. This is not something that you can apply mechanically every time, though. When the swarm has a plenty of crappy crystals, you can't go very far. That's because with increasing distance those crappy crystals start making a mask that blocks the display more and more, until at some point the display is completely gone. I have seen this change to a total masking happen on some occasions very steeply and not at all that far from the lamp.

Well, I wandered off a bit here. Back to the display. But there is really nothing special to it. Two less often photographed halos are visible, the "column 135, 136" which is related to the 46° infralateral arc, and "column 3152, 3162", which is related to the (as yet unobserved) anthelic 46° supralateral arc. We might need to set up an international committee and come up with real names for these and many others some day. Walt Tape has already written of the naming of "column 351, 361" even if he doesn't offer an answer.

I thank Olli Sälevä, a colleague here in Rovaniemi. This display was photographed with his camera. He lent his Canon 80D to me when my camera broke. 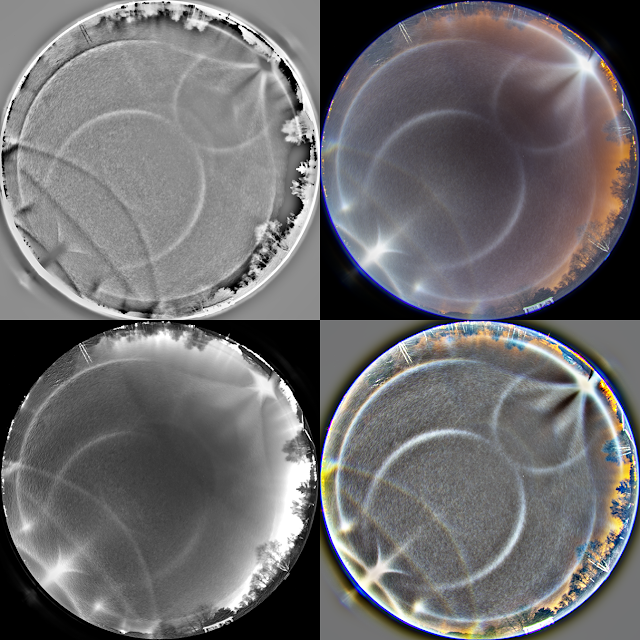 Four versions of the image. Upper left is b-r, lower right bgr. The black and white image to its left is just to fill empty slot, I played with Photoshop's Black & White sliders. This shows the blue circle somewhat better than other versions. 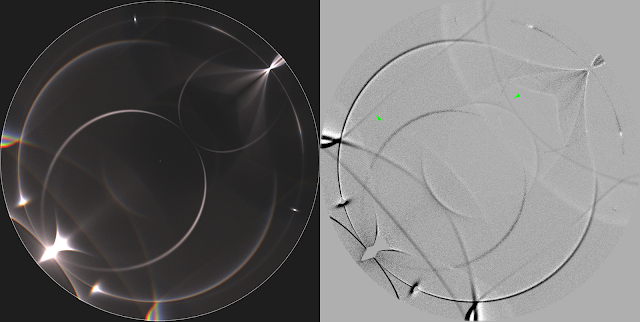 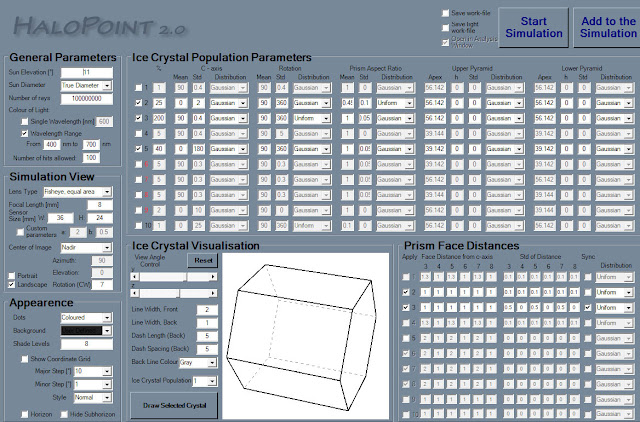 Parameters for the simulation.
Posted by Marko Riikonen at 14:47