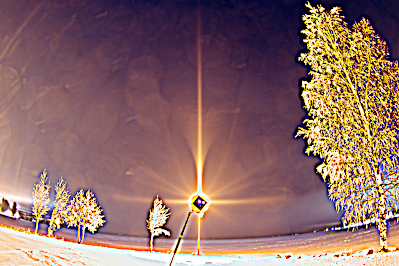 After having spotted reasonably thick diamond dust from a distance while taking the sheepdog out, I spent good few hours outdoors observing and photographing divergent light halos in the surroundings of Pikku Vesijärvi park in Lahti, Southern Finland. As is generally the case in urban areas in this country, there were many lamp posts to choose from, but few of them provided any sort of darkish background for serious observing. Much of my time went into finding good spots and chasing the best swarm of ice crystals while also trying to avoid crowds of people. I found quite good conditions in the harbour area: very quiet this time of year but the lights along a boulevard are being kept switched on. For the best results I chose a lamp at the far end of the boulevard with nothing but a lake in the background.

Based on my visual observations, much of the display was dominated by singly-oriented column crystals with additional contributions from plate crystals at times. Temperature at the nearby Sopenkorpi weather station varied in the range of -7°C to -9°C.

The photo above is an unsharp-masked stack that consists of 10 individual 30 second exposures and covers some 10 minutes at around 9:15 pm local time. My interpretation of the photo is as follows:

Some uncertainty remains on the identification of the arc immediately below the helic arc. Nicolas Lefaudeux (personal communication) has kindly offered two possible explanations that are both supported by his atlas of divergent light halo simulations: Firstly, corresponding to a hypothesis of singly-oriented column crystals (and the interpretation that the Y-shaped arc indeed is the upper tangent arc), this arc would be the divergent light version of Wegener arc. For the other possibility, we replace the idea of singly-oriented column crystals by Parry orientation, which means that the Y-shape would come from the upper sunvex Parry arc. The oblique arc below the helic would then be divergent light Hastings arc, potentially with a contribution from Tape arc, as the two overlap in the simulation.

The relatively strong presence of helic arc provides some support to the Hastings/Tape option. On the other hand, from what I could see visually for the most parts of the display, I would feel uneasy to exclude the presence of singly-oriented crystals altogether. The smart-phone photo below illustrates my point: the sparkles above the floodlight make no resemblance to Parry, but instead look much like upper tangent arc. Therefore I feel that at least part of the intensity is likely to come from the Wegener option. 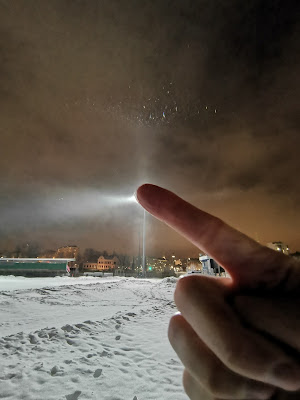