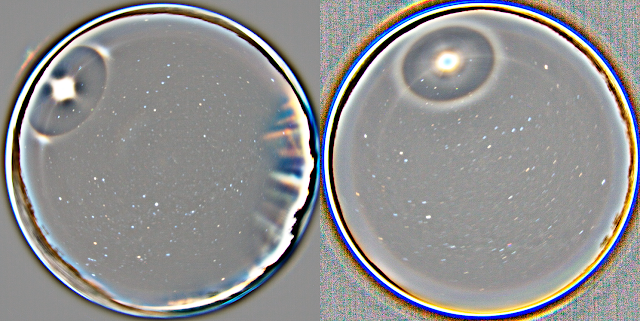 The two displays above have both a faint parhelic circle, but the one on the right has a notable omission: there are no parhelia. These photos (12 and 7 frame stacks of about 2 minute exposures) were taken in Rovaniemi on the night of 3/4 January, in different locations and 3 hours between them. In Taivaanvahti less heavily edited versions are shown.

With the moon at 33 degree elevation in the right hand image – which was the latter shot of the two – the parhelia should be far enough outside the 22° halo to avoid being masked by it (even with its puffed up form). It seems to me the only explanation for this solitary parhelic circle is to assume special plate oriented crystals that allow only for an external reflection. Below are two simulations to illustrate this. The simulation on the left has the hits limit at 100 for both plate and random populations, on the right for the plate population only one hit was allowed – an external reflection. This gives the parhelic circle without parhelia.

Should this be the correct explanation, one may still ask why the restriction to external reflection applies only to plate oriented and not to random oriented crystals. Maybe there is something else going on here that has not occurred to me. In 2017 my camera captured a similar case. 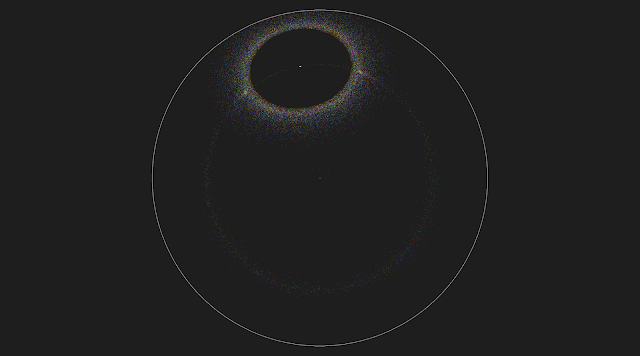 EDIT 25 Jan: Added above a third simulation to imitate a buffed up 22° halo. It has 22, 23, 24° halos of about equal brightness. The parhelia are still outside of this broad ring.

I include also two spotlight views from this night. They were taken before I photographed the lunar display in the left hand image. Odd radius halos are visible, 24° plate arcs and 35° halo. Temperature was -20 C. Some more photos are shown in Taivaanvahti. The apparent 9° stuff in the right hand lunar photo is probably an artefact, the appearance of these features seemed to depend on the values of image enhancement. 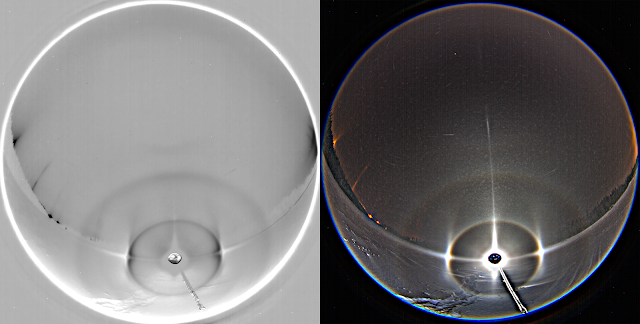 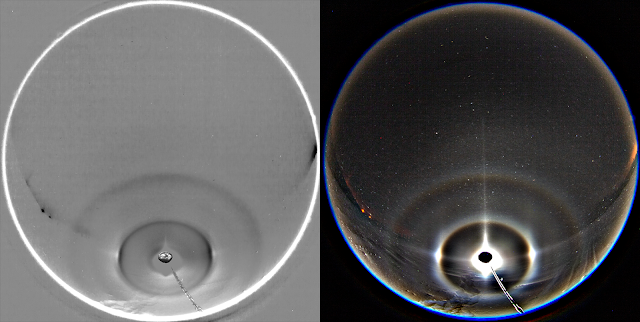 The camera is Canon 40D, the same one that I have been using since the start of the season. It is gone now, it broke when I was ready to photograph a great plate display the another night. Even if this camera leaves much to be desired, such as dynamic range, the line noise, not having an integrated intervalometer, it is quite good where artefacts are concerned. Serious color banding artefacts are not a problem with this body.