A big display from Sotkamo, Finland – with a possible new halo 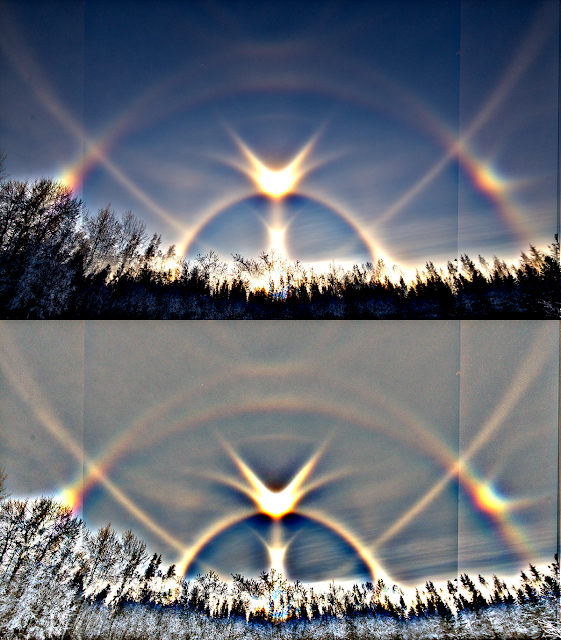 Two years ago the halo community got its latest novel multiple scattering halo in the supermassive Borlänge display: a halo that is both parhelion of the tangent arc and tangent arc of the parhelion.

It seems now we have a second case. On 25 November Sami Härmä photographed an impressive display in the Naapurivaara village of Sotkamo, Finland, and in the photos he published in Taivaanvahti people thought of seeing fuzzy spots reminiscent of the Borlänge parhelion-tangent arcs.

Single photos didn't respond well to enhancing, so it was good there were some with similar enough composition and taken with sufficient time between them to do stacks. These stacks seem indeed to confirm the presence of the parhelion-tangent arcs.

And there may be more. In the stacks both Wegener arc and uppervex Hastings arc materialized, and in addition to having the parhelion-tangent arc enhancements in the expected location on Wegener arc, it looks like the Hastings might have its own enhancements, too: a parhelion-Parry arc. This would be a novel halo, though in the light of this new wisdom, one might see it now also in the Borlänge display on the right side.

If we consider the prospects of parhelion-Parry arc purely from the perspective of sun elevation, then the Sotkamo display comes out more favourably. That's because the lower sun elevation of 4.5 degrees in Sotkamo gives, all else being equal, a brighter Parry than the 6.0 degrees for those Magnus Edbäck photos of the Borlänge display in the link above.

At the end of this post are three photos that allow to compare the intensity of the Parry and tangent arcs in the Sotkamo display. While the tangent arc looks a bit brighter of the two, the difference may not be as big as in the Borlänge display, at least judging by the video by MrWhikked. The Edbäck photos might also be re-visited in this respect, the Parry and tangent arcs are washed white by processing in currently published versions of his photos. 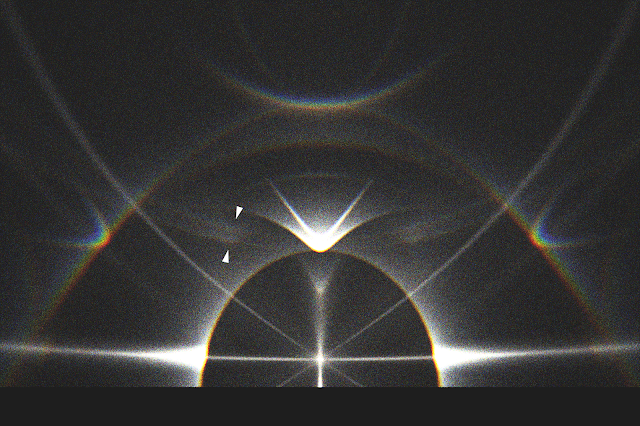 A HaloPoint simulation of the display, arrows marking the parhelion-tangent arc and parhelion-Parry arc. I was not able to simulate the display's Ounasvaara arc and uppercave Parry arc with one Parry crystal population. Triangles were needed to get the former, tabulars the latter. The V-shape inside 22 halo is two multiple scattering halos superposed: tangent arc and Parry arc from subsun. Neither has been observed yet, the V in the Sotkamo display inside 22 halo is Moilanen arc. Fixed multiple scattering probability 0.7 was used. 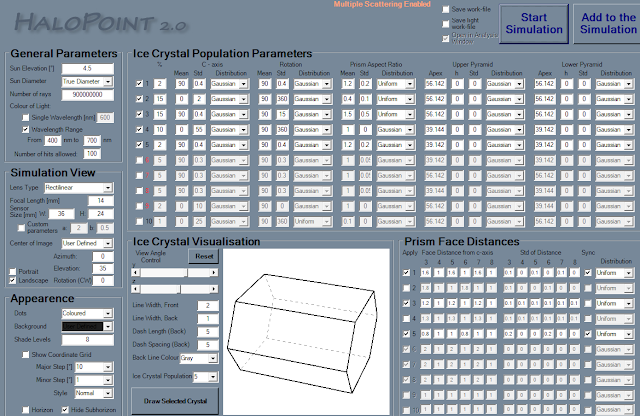 A baffling detail is the weakling circumzenith arc. The apparent multiple scattering halos in this display need not only very bright tangent and Parry arcs, but also very bright parhelia. And very bright parhelia should translate to strong circumzenith arc. Actually, it is not just weak. The cza simply looks strange, as if made of two parts: a brighter stub embedded in the 46 supralateral arc, continued by a much fainter extension. And is there even a gap separating the two parts? Compare this to the normal looking Borlänge display cza.

Let's move on. Notable mentions in the Sotkamo display are of course the uppervex Hastings that is a great catch in a solar display, the third one on record, and the outstanding Ounasvaara arc (see the photos in Taivaanvahti), which is likewise the third known solar case. It was easily bright enough for visual, and Härmä indeed wrote me of having seen it with his eyes.

There have been other displays with monstrous Parry contribution, but this is the first time we get a wide photographic coverage of the sky of such a display. In the Borlänge display the video by MrWhikked gave us glimpses of what's going on elsewhere in the sky, providing valuable extra info, but it is nice to have photos now.

Härmä took many of his photos by bracketing three shots in quick succession. The stacks shown here are made of such separate sets. In the info under the photos for example 4x3 means four three image sets. For the record, the photo id numbers are also given. The two four set stacks (normal and flip stacked) were a bit of a stretch, there was quite a lot of distortion between the better matching two 2x3 sets from which I made them. That's why you see the helic arc duplicating towards edges. But in the center where it mattered for the multiple scattering halos the distortion is less. Folks with more technical prowess surely could do better work of Härmä's photos than I managed. Although the original raws are not publicly up for download, Härmä is happy to send the batch should anyone like to take a look. The photos were taken at 12:40-12:57 local time, exif gives an hour later time as the camera was in summer time.

The display occurred 6 km from the slopes. Härmä tells the temperature was around -7 C, right in the -5 to -10 C range where the most massive snow gun displays are forged. The fact that it was cloudy before the display appeared and that it was soon finished by clouds taking over again, tells this was a punch hole cloud display – particles from snow gunning turning a small area of low hanging stratus into ice crystals. 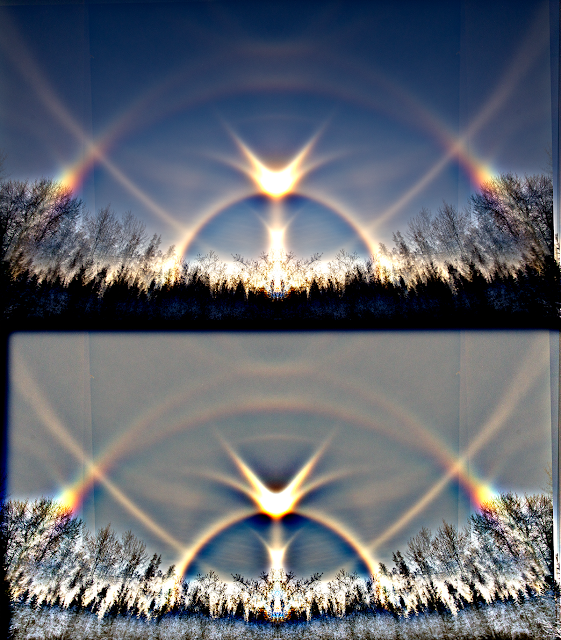 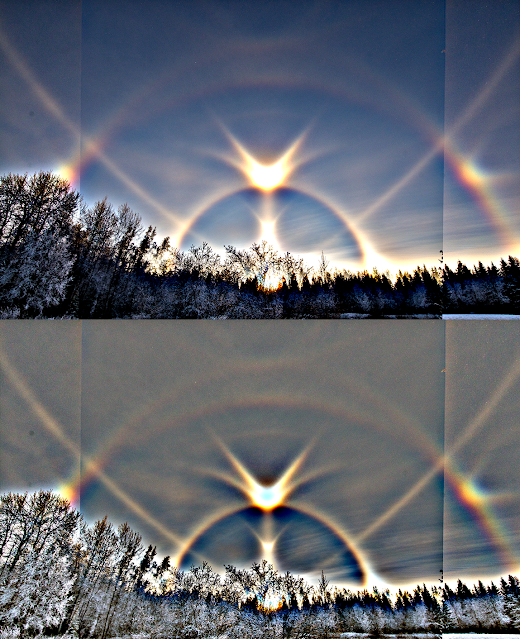 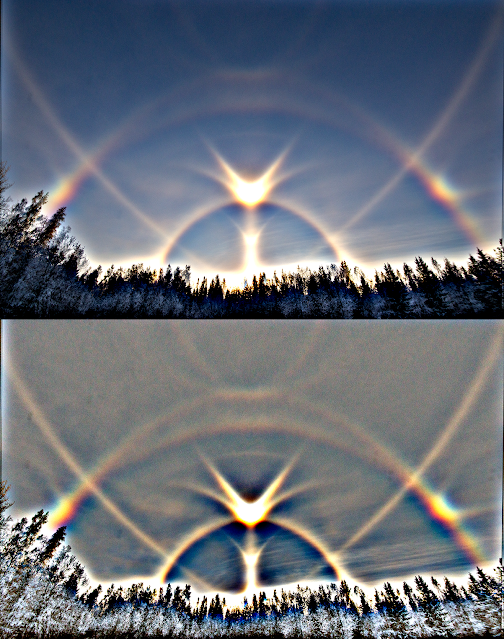 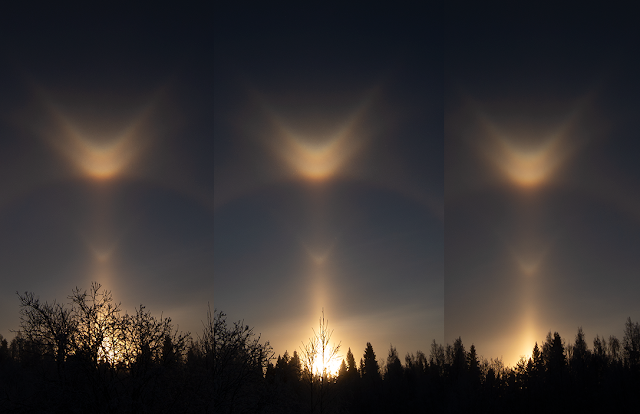 Brightness comparison of the tangent and Parry arc. The photos are picked from three of the four sets used in stacks.
Post corrected 6.12.2020. Replaced "infralateral" with "supralateral".
Posted by Marko Riikonen at 20:48