Halos on the night of 17/18 December in Rovaniemi 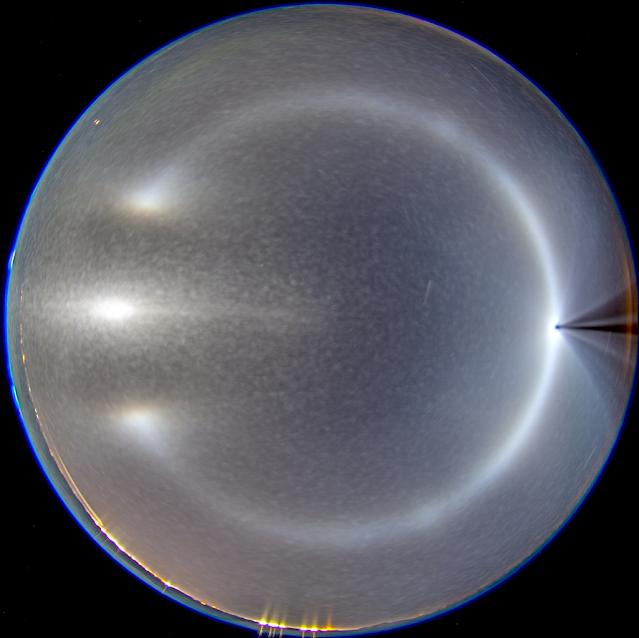 When you do spotlight, two things are desirable: a dark location and stable swarm. On the night of 17/18 December in Rovaniemi both were realized, totaling me more than two hours of exposure.

The sky had cleared up in the daytime and for the longest time I saw the sun, only its upper half at noon visible above the horizon from my 6th floor apartment. Some fingers of fog started to rise also here and there, promising a good halo chase for the night.

When I arrived to the slopes at 4 o'clock these fogs had disappeared and there was no diamond dust. Weather readings put the airport at -12 C while railway station was at -11 C. The airport being at a higher elevation (200 m / 650 ft) than the railway station (80 m / 260 ft), this means no inversion. Only when the temperature roles switch can diamond dust grow in clear sky conditions.

This happened after two hours, at 6 o'clock. The swarm spread south-west and engulfed the city center and the industrial area beyond. It was not worth to start photographing, though, given the light polluted locations and poor material – streelights had only pillars, no parhelia or tangent arcs.

I was hoping for the swarm to reach the southern end of the industrial district, so I could photograph in the large area there used by some earthmoving company. This location in Anttilanvaara is reached by an unnamed road and has a great dark segment spanning about a half a sky.

Finally the swarm engulfed the Anttilanvaara area and I got to work. By this time the temperature had plateaued in my tripod leg thermometer to around -20 C , and the stuff was mostly plate, with some Parry / column in the beginning. Below are shown stacks from the photos I took during the night.

The night's first set, 57 x 30s. In addition to plates, there is also Parry as evidenced by the helic arc. The arc emerging from subanthelion looks more like diffuse arc than subanthelic arc, telling there is also column, even if no subhelic or Tricker are visible. I saw the diffuse arc visually, but not tangent or Parry arc. The dark line in BR following opposite to the lamp is an artefact. The lamp is about 8 degrees below the horizon.

As the display of the previous image deteriorated, I looked around and changed to a place where more elevation was possible. Judging by the location of the subsun relative to the 22 halo, the lamp is about 15 degrees below the horizon. 54 x 30s. 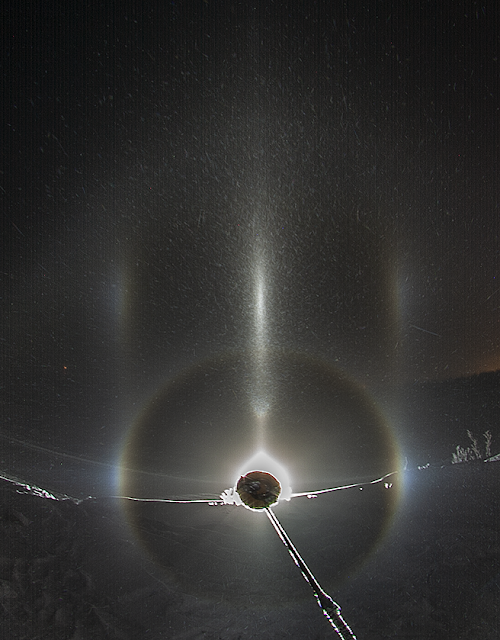 I noticed an additional brightening in the pillar and broke the previous set to turn the camera to photograph it. It was Moilanen arc as expected. 15 x 30s. 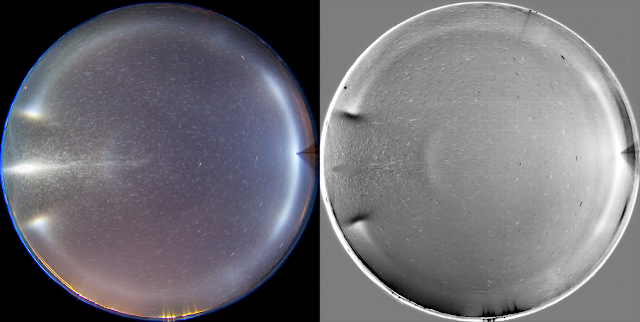 Once the Moilanen was gone the plate got again better and I returned to all-sky view. 12 x 30s. After this the swarm disappeared. I packed up to follow, its edge had receded to about 1 km towards the city. I visited a grocery store, buying potatoes and apples. 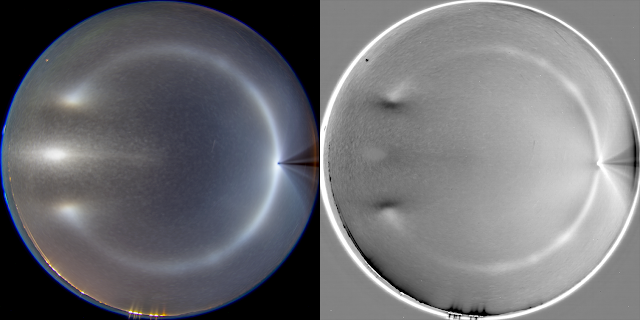 After shopping I headed back to Anttilanvaara to see it was engulfed again. This gave me this best set of the night before the swarm receded again. The edge moved several kilometers towards the city and I decided wrap it up. That was around 2 am. I think I should have just stayed: when looking from my window at 4 am as I was going to sleep, I could see the diamond dust cloud still resided in the same area over the city and possibly it might have extend its reach to Anttilanvaara yet once more. 57 x 30s. The lamp is here maybe about 30 degrees below the horizon. 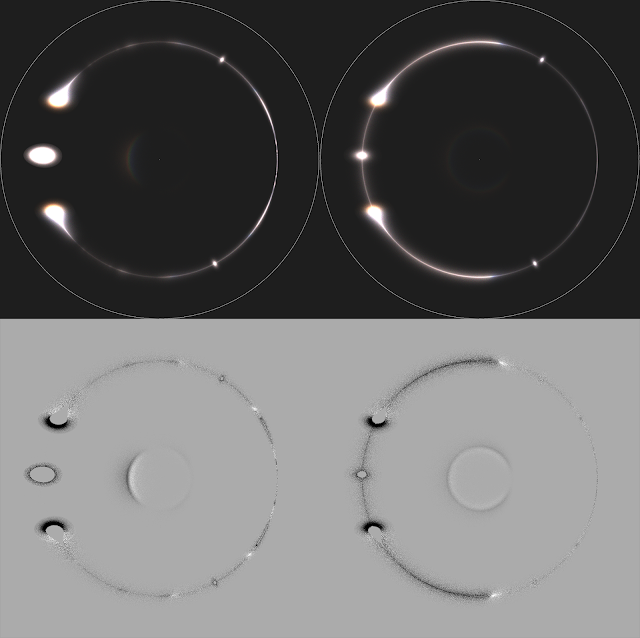 Simulations to compare with the image above. The simulation on the left is made with regular hexagons, on the right with full triangles (h/d 0.5 dev 0.1 for both). There may be some of that blue spot at 100 degree azimuth from the subsun visible in the photo, too. It is from subparhelic circle raypath 3257. It seems to remain at the same distance from the sub-120 parhelion as the sub-Lilje blue spot on the other side, so there is some relationship here. Light source elevation is 27 degrees. The bulge this raypath makes in the subparhelic parhelic circle with regular hexagons has been identified in the great spotlight display that Jari Luomanen and Marko Mikkilä photographed in Sotkamo on 22 November 2014. It might be also of interest to see how those photos would look in BR.

Here is shown only the 3257 raypath. On the left regular hexagons, right triangles. The intensities are comparable. The separate spot with regular hexagons is from 3276543875 raypath, but the part of the sequence that makes full round of the crystal (765438) can be reduced, so it is actually a 3257 raypath. Maybe this spot will be seen some day. In Parry crystals this same ten hit raypath makes subanthelic arc and is likely an important contributor to its intensity in some South Pole displays at least. The raypath is listed in Tape's Atmospheric Halos on page 130 and on page 35 is also a visualization of it.
So that's it folks. This post cleared the backlog and I have nothing more to report. Thus far the winter has been pretty low on the action, only a couple of singular nights of diamond dust. But I am sure in January-February a more hectic gear will be turned on.
Posted by Marko Riikonen at 22:14