At midnight I decided it was time to go. The plume of the heat plant 6 km from my place had developed a kind of bend that could signify an inversion just starting to set in.

Turned out there was still plenty of time. It was windy and dry at the slopes. The gunning plumes died right away. Nothing else to do but wait.

Clouds arrived, covering more and more of the sky, but they were too high. Finally after 3 o'clock the action started, either because the cloud base lowered or it cleared up. It is not always easy to know because in clear sky conditions snow gunning makes often its own cloud some way above the ground, which may be thick enough to block even the full moon. 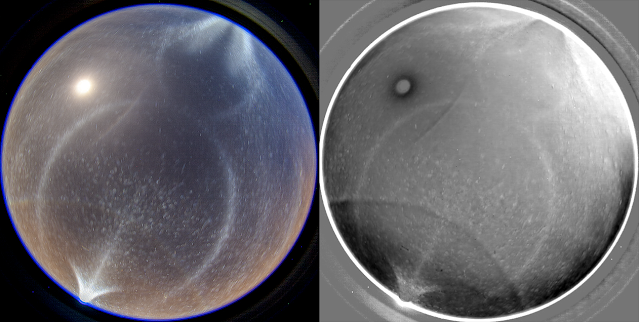 Lens hood is limiting the view in this seven photos stack when the display was at its best. In BR image inside the Tricker arc is a dark line. The location matches the subanthelic 46° supralateral arc, but it is certainly a borderline case. It is worth noticing how poor the lunar display is in comparison. That's most probably because the swarm was lying low. 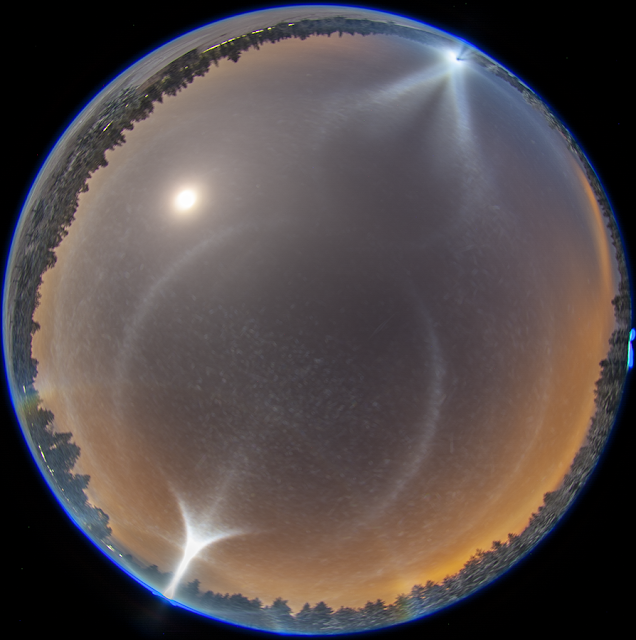 Here the lens hood is off. A 14 frame stack. The Wegener arc was really impressive visually from the side of the beam – a colored, almost solid arc.

I started with a failed attempt to photograph on the incline of the eastern Totto slope where they had not yet made any snow. The swarm left me just as I got the equipment in place. A little later on the golf track I managed to get a handful of photos before the swarm shifted again. But I botched it by taking only the lens cap off my new 4.5 mm Sigma lens, not the lens hood. When I realized the mistake, the display was already declining. In general, the combined lens hood + lens cap of this lens is not that great. The lens hood thread is endless and you spend a life screwing it off. 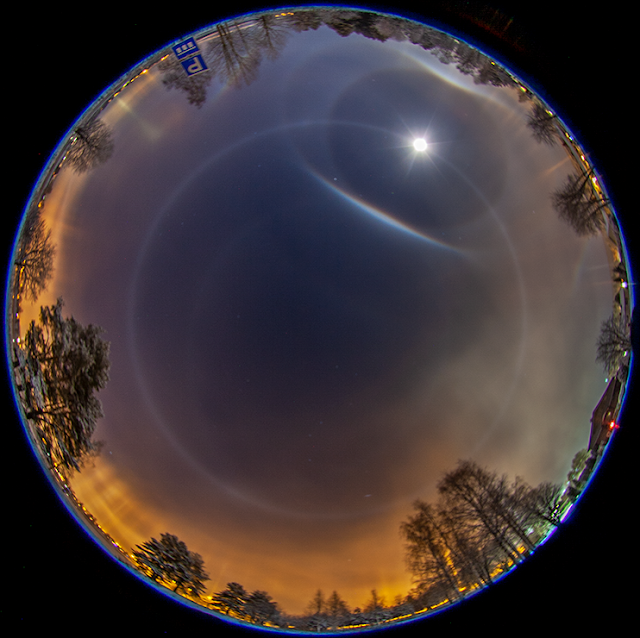 There seems to be the other half of circumscribed halo visible here. The photo was taken at 4:48. Moon elevation 37.1 degrees.
Then I ended up photographing the display by the river at end of a short road called Venetie. Lunar this time. The swarm became stable and I think I was in exactly the right spot. A detail of some interest is the circumscribed halo that is seen at lunar elevation of 37 degrees. Well, it is only half a circumscribed halo as the other side is spoiled by trees and light pollution. But in any case I haven't seen before photos with circumscribed halo lower than 39 degrees. Theoretically, the limit light source elevation for circumscribed halo is 29 degrees. Probably it was here full still longer, but it is cut by the trees as moon goes lower.

I called it quits at 6:30 because the display was steadily worsening. As I drove to my place, and out of the diamond dust for first time since the action started, the sky cleared up. So, as to the question posed in the beginning of this post, whether this was a clear sky or punch hole display, the former was true.

In hindsight, I should have done spotlight instead of lunar. Wouldn't have had to worry about the movement of the light source, and even with all the light pollution from the streetlights and moon, it would have most likely been the more interesting option results wise. 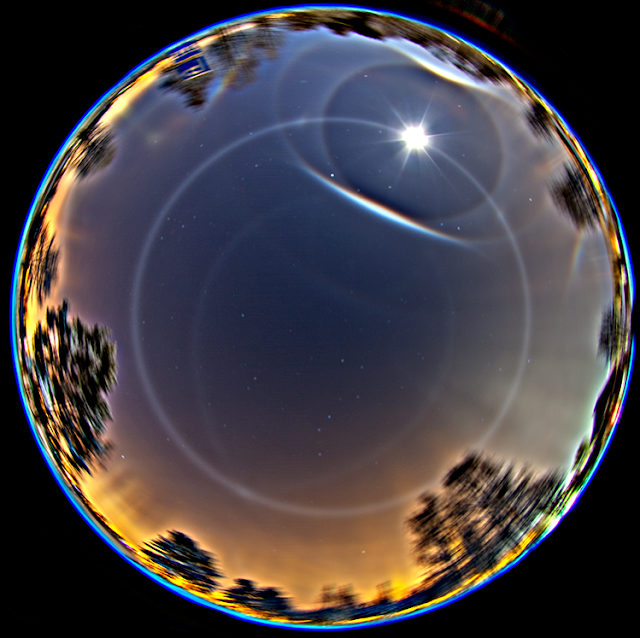 23 frame stack. Moon elevation 37.2-36.7. Moon movement has been accounted for in post processing for this photo and the ones below. All photos in stacks are 30 s exposures. 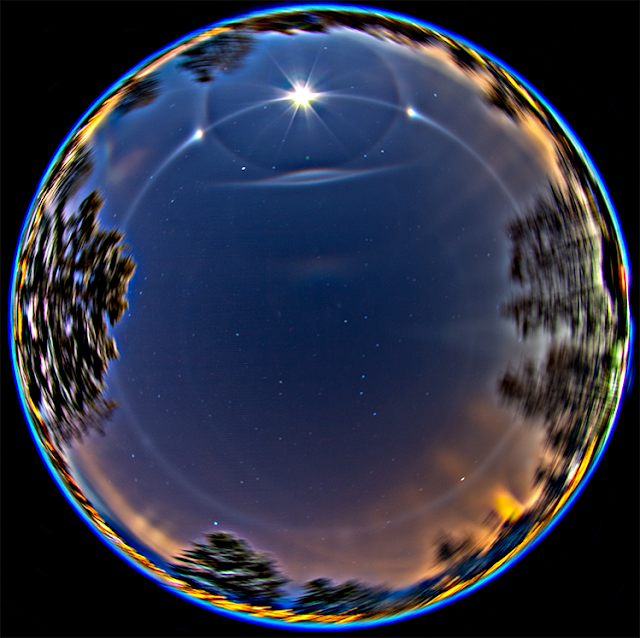 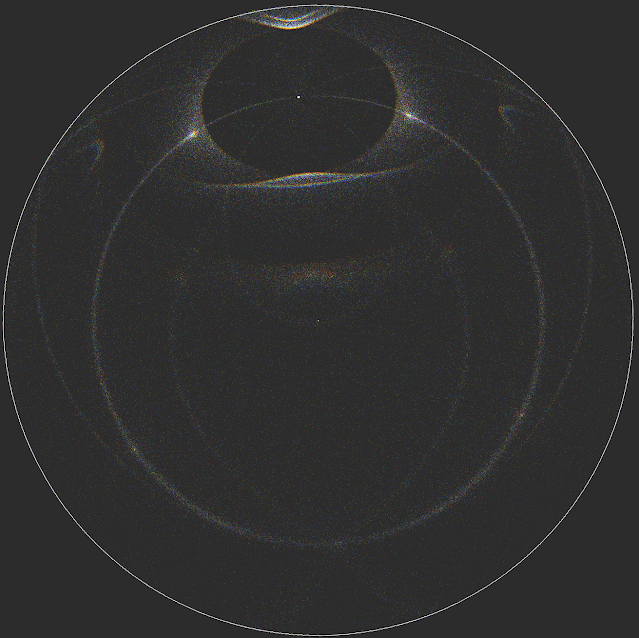 Simulation for the image above, 29.5 light source elevation. 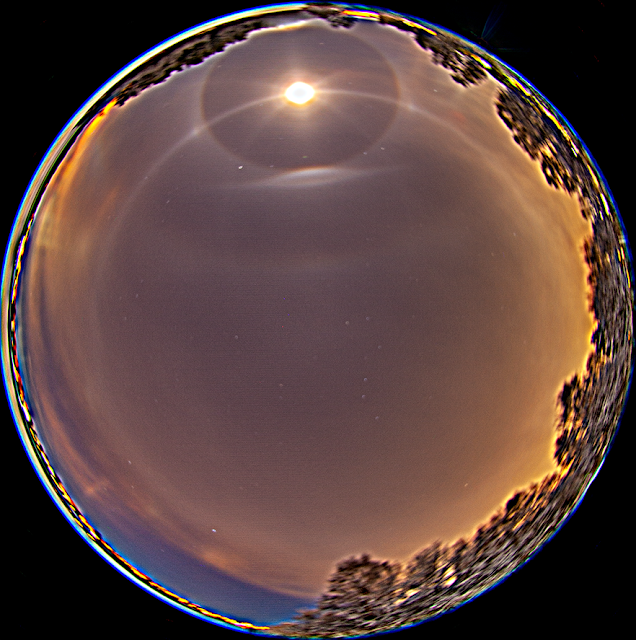 The night's last set 6:30 in the morning by the river at the end of the road Pieskätie. Nine photos stacked.
Posted by Marko Riikonen at 19:02