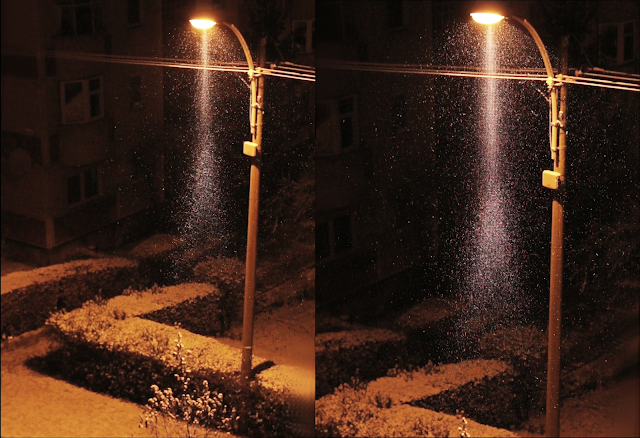 In Cluj-Napoca (Hungarian: Kolozsvár), Romania it is a common winter weather situation to have a dense layer of fog sitting on the city, with temperatures a few degrees below 0⁰C throughout the day with only the surrounding higher hills and mountains rising above this fog. High levels of humidity combined with low temperatures and aerosols floating in the air often results in industrial snowfall or sometimes (especially near the edge of the fog) diamond dust. On the evening of 2nd December we had the above described conditions but the weather was about to change, with gentle southern wind slowly sweeping out the fog.

Around midnight as I prepared to go to bed, I looked through my window and instantly noticed the unmistakable tiny sparkles of diamond dust under the streetlights. It was too sparse to form consistent halos (although the most intense moments produced visible lower pillars), but the sparkles hinted to the presence of the lower tangent arc. After a quick set up, I began taking videos of the area below the closest lamp (at 8-10 m from me, and approx. 8 deg. below eye level). The videos were around 4 min each, but many of them were rendered useless by the sudden drops in the amount of the diamond dust. Between two videos I also snapped a quick picture of a distant lamp that shows the pillar roughly as it was visible to the naked eye (see below).

On my computer I extracted every frame from the videos and saved them as jpg files (separately for each video), and stacked them together using a StarStax (a free startrail-making software) in ’lighten’ mode, to get the brightest value for each pixel in the resulting image (this is important as averaging the frames would wash out the individual sparkles that make up the halo). With this method I got an integrated image from each video that contained all the sparkles that appeared throughout that video. The videos were taken at various focal lengths ranging from 18 mm to 55 mm. When the first stacking results came out, I was simply delighted to see the lower tangent arc, and did not think much about it. However, on the next day I noticed something fishy: the tangent arc and the lamp comfortably fitted into the same field of view at 55 mm, which was not usual: this arc had to be way closer to the light source than a normal tangent arc. With the help of the solar disk (picture taken with the same equipment and settings, and resized to match the dimensions of the video), I measured and got approx. 7 degrees for the distance of the tangent arc from the lamp (see below).

This was completely new to me as I’ve never encountered any observations that describe tangent arcs so close to the light source, but I suspected the divergent light as the cause, since I knew that it can considerably alter optical phenomena compared to their familiar counterparts caused by paraller light rays. With the help of Walter Tape’s detailed article on streetlight halos (1), I confirmed that it is indeed the divergent light that caused the unusual appearance of the tangent arc, its distance from the lamp being normal for the lamp’s elevation relative to the horizon (since my observation of the below-horizon lamp with a lower tangent arc is equivalent to an above-horizon light source with an UTA at same angular distance from the horizon).

Based on Tape’s article, I also concluded that the strip connecting the lamp with the tangent arc is not a simple pillar, but part of the tangent arc. The slight widening at its center corresponds with the figures in the article.

On the following link you can watch a short piece taken from the video used for the picture on which the measurement was made, and the (sped-up) image stacking process using the frames from the original video: (2).