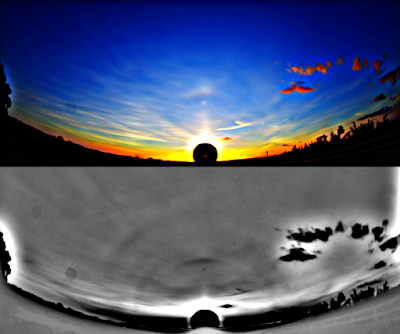 In the evening of 24th May 2020, a notable display of odd-radius halos and their associated plate arcs occurred in Berkshire, UK. I first noticed faint traces of circular halos - 20° and 23° as I could later confirm from photos - at around 19:20 BST, when the sun was at 13° elevation. Less than 30 minutes later the sun had come down to 9° and first signs of the upper 20° plate arc appeared, making obvious the need to find a view down to the horizon. The display got weaker after some time but regained some intensity less than 30 minutes before the sunset. Unfortunately there were some lower-level cloud interfering with my view for most of the observing time.

Stacked and further processed images from the first stages of the display (below) reveal 18°, 20°, 23°, and 35° circular halos in addition to the aforementioned 20° plate arc. At the end of the display (above), the circular halos are less clear, but plate arcs at 20° and 35° show up better. Most interestingly, perhaps, there are suggestions of 28° circular halo and the associated plate arc at the upper left-hand side at solar elevations 7° and 2°. Previously 28° arcs have been reported in the Lascar display of 1997 and in a few more recent occasions in China, but possibly never before in Europe. 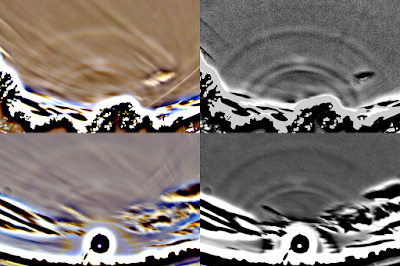