Kern and Hastings arcs make appearance in the UK 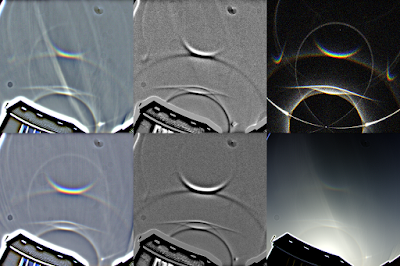 Only three days before the low-sun odd radius display ( http://www.thehalovault.org/2020/06/odd-radius-display-at-low-sun-in.html ), I observed a brief but intense display that included well-defined suncave Parry arc as the visual highlight. Shown above are the two 50-frame stacks that I managed to extract out of the display. Both cover five minutes and they are separated by another five-minute interval during which I was too busy to collect data. Solar elevation is 26° in the first (top panels) and 25° in the second (bottom).

Applying the usual background-subtraction on the average stacks (on the left) makes helic, Tape, and Lowitz arcs all stand out reasonably well in addition to the circumzenithal, supralateral, upper tangent, and Parry arcs. As the simulation (HaloPoint 2.0) in the top right-hand-side corner demonstrates, the anthelic arc close to the far left edge is Hastings rather than Wegener. Kern arc only appears in the second stack, coming out the clearest in the middle panel. Here, blue-minus-red colour subtraction is applied on top of the background subtraction. The bottom right corner is the average 50-frame stack without further processing.
Posted by Reima Eresmaa at 16:03