In early 2019 Dávid Hérincs saw halo formations on the surfaces of ice puddles that didn't look like anything we had seen before: white arcs of unusual geometry and spots in unexpected locations. This winter I happened to see for the first time similar stuff on lake ice in Tampere, thanks to a heads up from Petri Martikainen in Juva.

Hérincs did not photograph the crystals, but simulations that I made at the time suggested a possibility that crystals are all oriented exactly in the same way. This time we got the crystals under a microscope – first by Martikainen – and a wonderful landscape was revealed in which crystals were packed next to each other, and indeed locked in the same exact orientation. Below is one typical photo that I took. 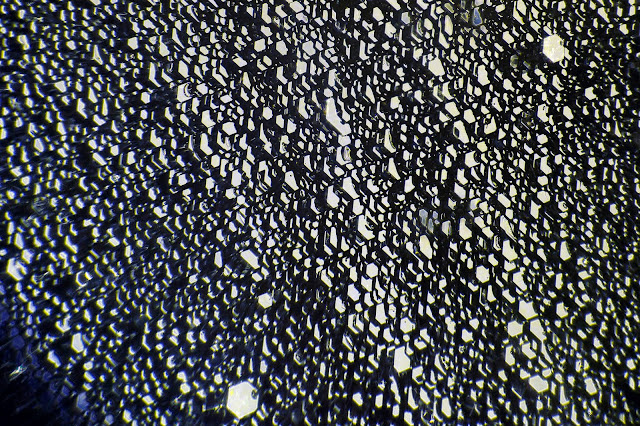 The displays are formed when deposited rain water freezes over the night. In Hérincs case it was ponds that froze, in Tampere it was water freezing on lake ice. Martikainen also successfully performed his own freezing experiments in his backyard. I followed suit, this video shows one of these home made ice plates with a Hérincs type display.

On that plate we see distant spots, both white and colored. Some move along roughly horizontal plane as the plate is rotated, while others are more or less stationary. Below is a freeze frame from the video with some stationary spots marked. 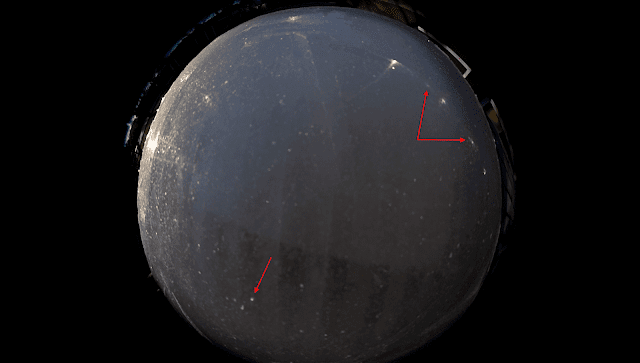 A frame from the video. The double arrow marks a white and colored stationary spot, which can probably be regarded as 120 subparhelion and rotated subparhelion analogues. The singular arrow marks another, much more tighter spot that also is stationary. The formation of this spot from the two others may differ in some way.

Concerning the colored moving spots (not including the subparhelia and rotated subparhelia), in simulations many of them arise from three-hit prism face ray paths plus basal face reflection. In Parry oriented crystals such ray paths make reflected Hastings arcs when the inner prism face reflection is from horizontal basal face. Below is a stacked segment of the video demonstrating how the moving spots draw out subparhelic circle when the plate is rotated, i.e. when the crystal is allowed to rotate azimuthally. 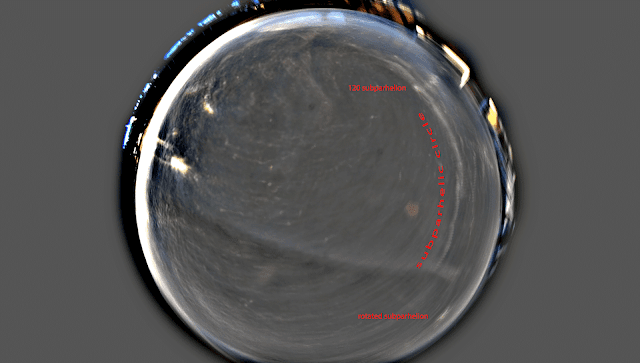 An average stack from a segment of video. The moving spots draw out a subparhelic circle on which the stationary spot of 120 subparhelion stands out. There is also a colored rotated subparhelion spot.


The distant white spots and colored subparhelia were seen also on lake ice as shown by this video. Below is a photo of the same situation. Both the colored and white spots were blindingly bright, you couldn't look at them at all, a heavy underexposure was necessary for the colors to not wash out. 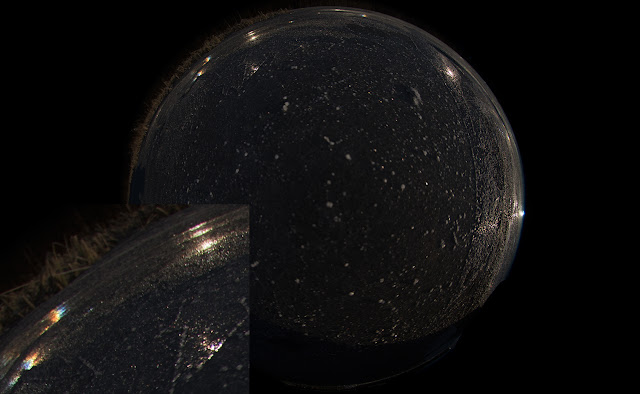 Another kind of spot – which was also photographed by Herincs – is the colored spot on the white arcs in the nadir region. In this video several instances of this spot are seen. These spots have been assumed to be segments of circumnadir arc from plate oriented crystals. One can simulate the white arcs by azimuthally locked column oriented crystals and the circumnadir spot can be made to align with this arc as demonstrated below. 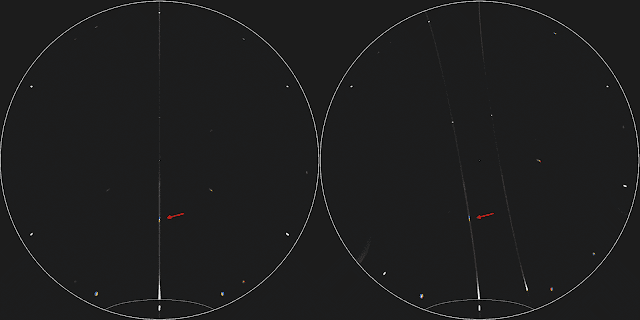 Two simulations that have between them 10 degree difference in the azimuthal rotation of the column and plate population. The circumnadir arc spot (arrow) stays on the parhelic circle. In the left side simulation the other white arc is subparhelic circle. Its analogy may not appear in real displays.

It is noteworthy that no sub-Kern spots, which would be expected to have color order reversed (in the area opposite to the cna), are not seen.  There is also another colored spot on one of the white arcs at 01:13-01:17 in the video. Below is a still frame of that double cna spot, though the other spot doesn't show very well in it. 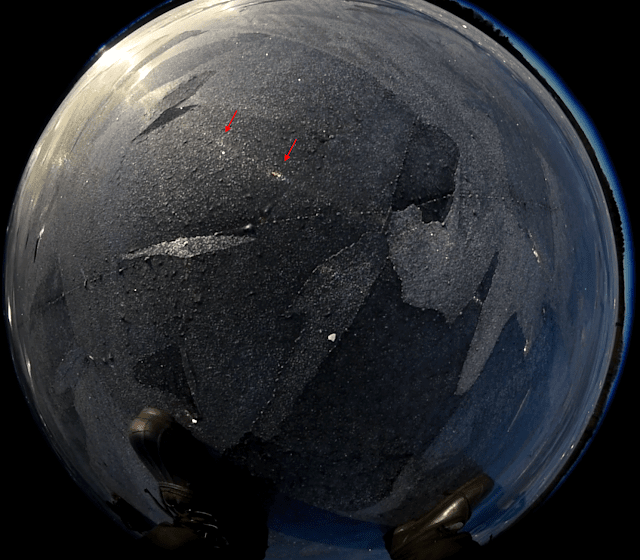 In simulations cna spot can be off-set by tilting the crystal, as demonstrated below. The other spot is made by exactly horizontally oriented plates, the other one by plates tilted 10 degrees. So it looks like there are crystals on this particular patch at two tilting angles. 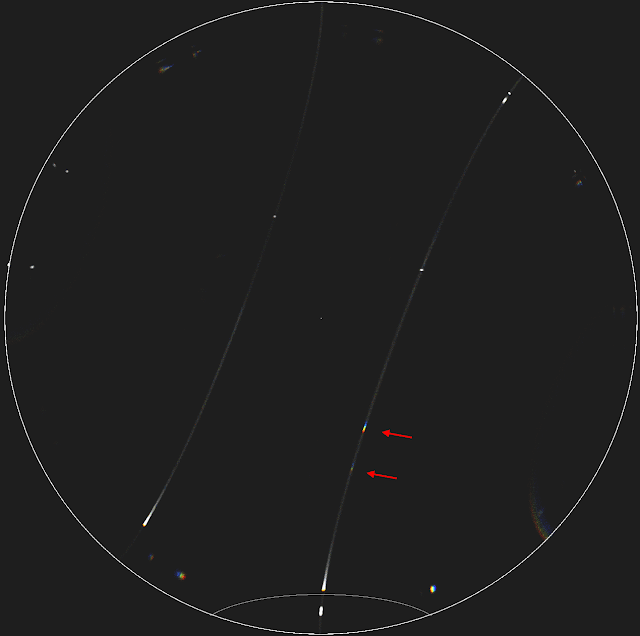 The white arcs are really parhelic circles. However, the column oriented crystals go only as far as explaining the geometry. As far as the microscopic examinations are believed, the crystals are always locked in the same exact orientation in each patch, and thus should only be able to make spots, not arcs (although it must be admitted that at least two separate orientations seems to be possible as evidenced by the doubled cna spot above). But I won’t say no more about this, as Petri Martikainen has been studying the problem, and will hopefully write his own post in the future.

In the simulations above it is seen that also a moving white spot from plate population is aligned with the white arc. Here is a video showing such white spots on white arcs in a real display. Below is a still frame. 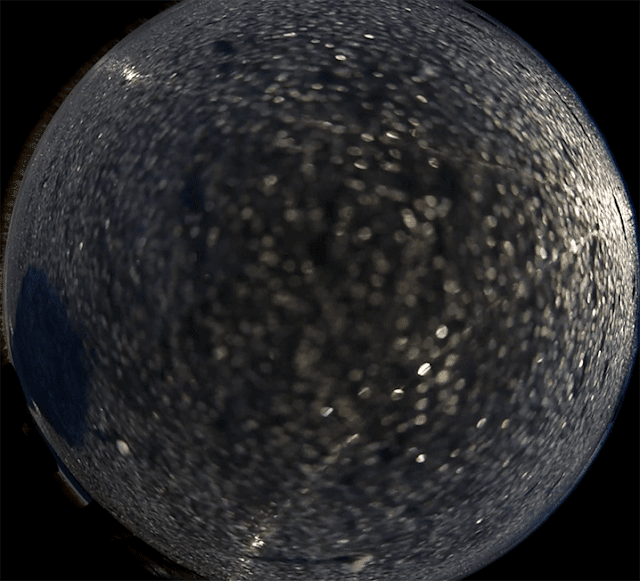 The simulations must be taken only as a rough guide. Simulation software assume halos formed in singular crystals floating in the air, on the ice plate the situation is very different. The crystals are packed next to each other and the attachment of the crystals incapacitates some faces. Then there is the inner reflection from the bottom of the ice plate to be considered. It could be that a multiple scattering formation might better describe some features. Moreover, we have seen under the microscope some scattered crystals rising above the basic level of the packed crystals. These may explain features that look like they are consisting of separate crystals rather than being made of solid light. The circumnadir spot, for example, is in many displays visibly made of individual crystals.

I throw in also some simulations from randomly oriented crystals that show the area where any given raypath can make a halo spot in strictly regimented crystals if the orientation of the crystals only is right to light up the particular spot. I haven't covered it all, for example the rotated subparhelion type raypaths are not simulated. 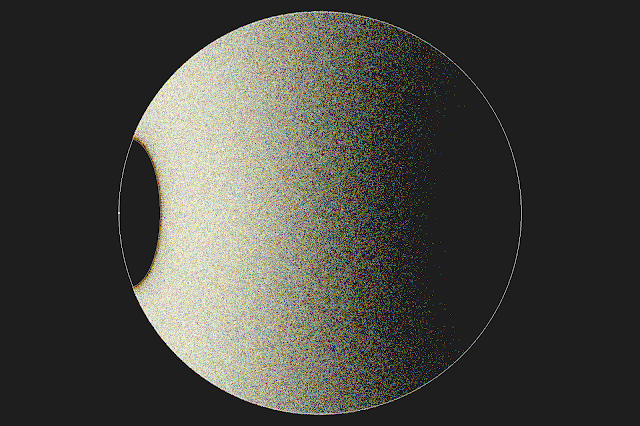 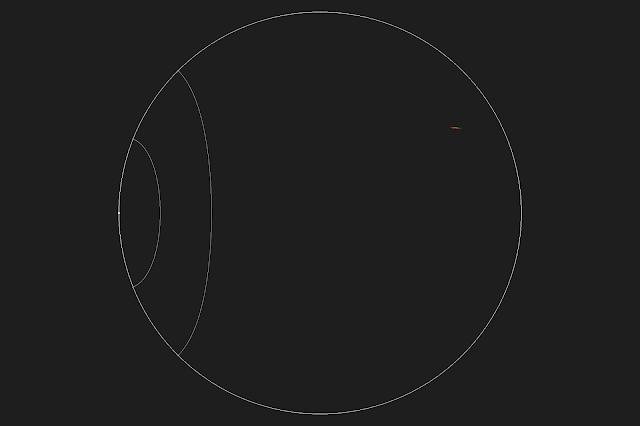 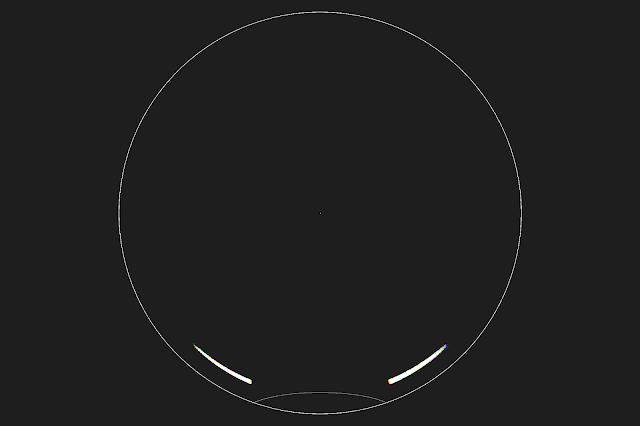 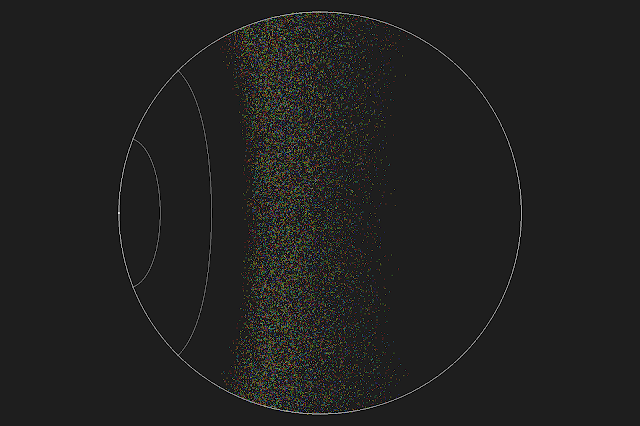 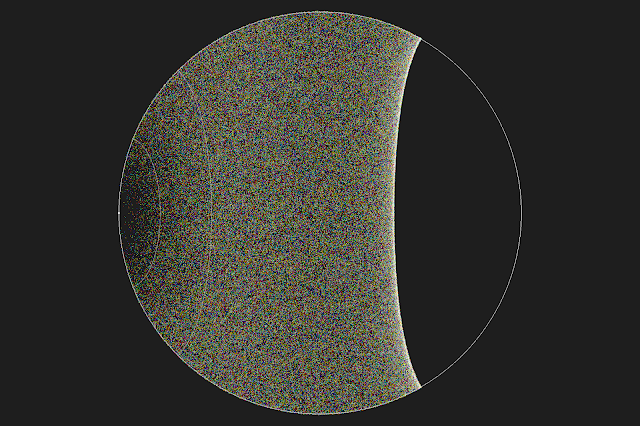 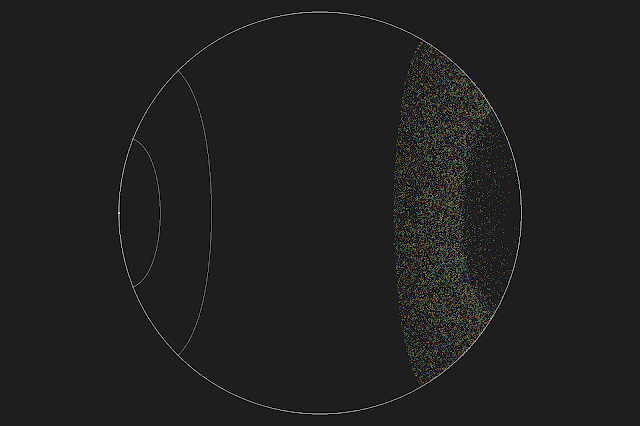 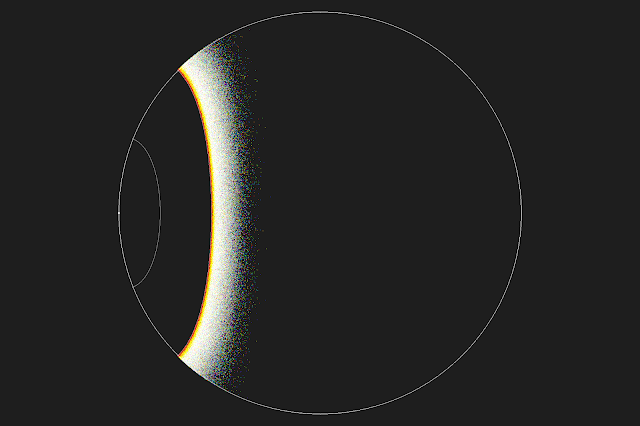 
Well, I have been haphazardly touching some issues here. This stuff is way over my competence. There are tons details that I did not address, tons of open questions. Hopefully more capable guys will step in and explain it all in a coherent manner.

Let's end with some practical tips for those wanting to get their share of these displays. What you are looking for is a mosaic ice surface with fleeting reflections everywhere as you walk on it. The mosaic comes about because the crystal orientations are identical only in small patches.

To see these displays, you need lean really close to the surface: in my videos, the camera lens may be just a few centimeters above the surface and is occasionally even grazing it. From standing height only subparhelia and perhaps weak sub-120 parhelia are created over the patch mosaic.

The backyard versions I made by freezing water in a kind of plastic tray and metallic oven plate. In the metallic plate I never got a good display, so this may be something to avoid. You may want to remove the ice plate from the tray for various reasons, so anything that helps to do this without breaking the ice plate is good.The plastic tray that I used was slightly pliable, bending it detached the ice plate quite handily from it.

An old ice plate may give even a better display than a fresh one, so it is good to keep the plates around. The crystals don't grow straight from the freezing water, but from atmospheric moisture, so if frost is developing in the night, then the prospects for having the Hérincs type growth on the ice plate are good.
- - - - - - - - - - - - - - - - - - - - - - - -
addentum 11 June: forgot to mention that simulations are made with HaloPoint2.
Posted by Marko Riikonen at 14:12