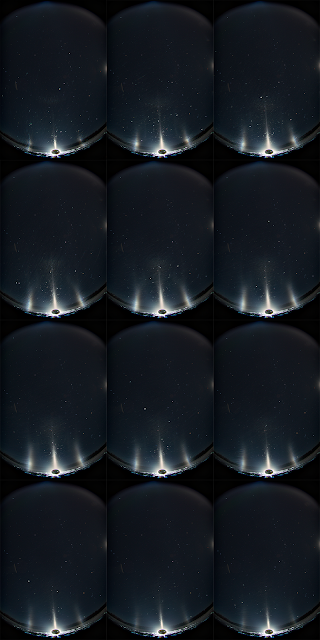 by Marko Riikonen and Petri Martikainen

Some fine surface halo displays were seen on lakes’ ice on January 9 and 10 in Finland. Photos were also taken on the night of 10/11 January when the moon was high in the sky. Halos appeared on two different surface-types, both of them showing completely different displays. Halos from what must have been azimuthally oriented crystals were seen on shiny, mosaic patterned ice surfaces. Near the shore in places hoar frost had developed, and on this less reflective surface more traditional type of displays appeared that were not from azimuthally regimented crystals.

In this post we will present our observations in Juva and Tampere concerning the hoar frost surface. The displays were quite similar in both locations. In Juva observations were done on both days, in Tampere mainly on the second day and the following night.

The halos were as follows:

46 halo/arc. A tightly confined and quite distinct segment of 46 halo appeared near the horizon on both locations. This might rather be defined as a kind of 46 arc because of the relatively restricted crystal orientations.

Helic arcs. In Tampere three surface helic arcs were visible. In Juva, where this feature was less well developed, two surface helic arcs could be discerned. In the night, with moon high in the sky, in Tampere a large, detached "Bottlinger's ring" helic arc was seen.

Subanthelion. In Juva, a prominent vertically elongated subanthelion was visible. In Tampere it was weak.

An arc at 45 degrees from antisolar point. Both in Tampere and Juva an arc that appeared to have a concave shape with respect to the subanthelic point was seen and photographed. It consisted of rather dense and faint glints. Its distance from the subanthelic point was measured from a stacked image at 45 degrees. There is likely a margin of error of one degree. Even though the arc appeared concave, it did not seem circular. 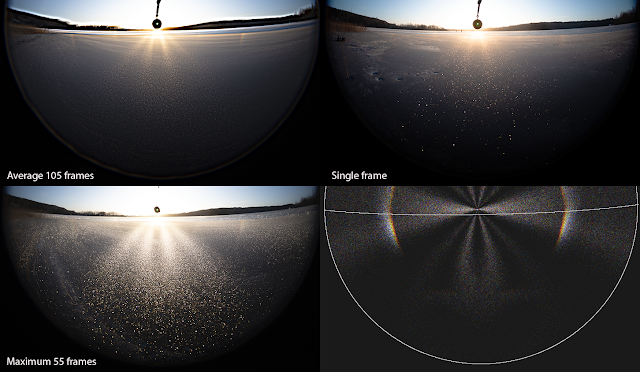 The display on 10 January in Tampere is shown above with a simulation. The composition of the display and the actual crystals on the surface (more about them below) guided our choice of parameters. Our initial simulation gave a strong 22 arc below the sun, while in the display there is no such feature. To solve this contradiction, we assumed that crystal attachment to the base might incapacitate two lowest faces which are needed to make this arc. To test, we curated the HaloPoint simulation software output file by removing all instances using these faces, and expectedly got rid of the 22 arc. Additionally, this also removed the extra 46 arc that is neither seen in the display. Comparison of scenarios with all ray paths considered and those having instances with two lowest faces removed, are below. 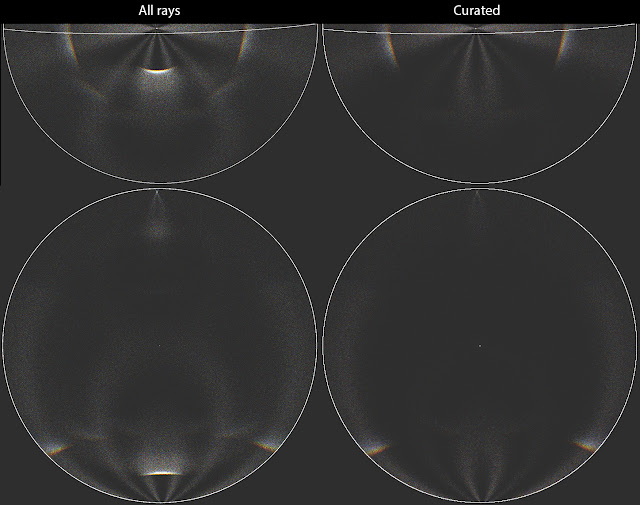 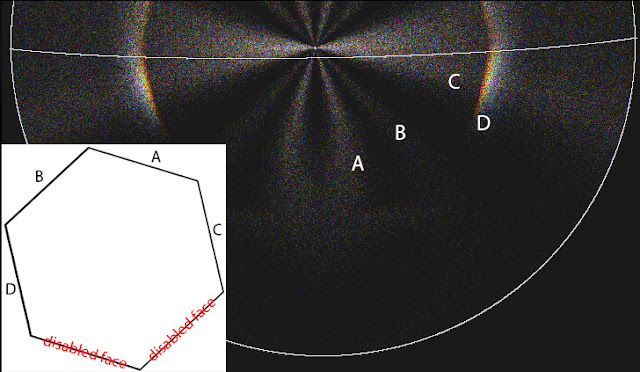 Crystals in simulations are oriented with their c-axis on average horizontally and rotated 17 degrees from Parry orientation. This rotation gives three upper prism faces (A, B, C) in different orientations to make three helic arcs to roughly match with those in the display (image above). Also, this gives the 46 arc near the horizon, the prism face responsible for it denoted with D. The precise parameters for simulation are below. 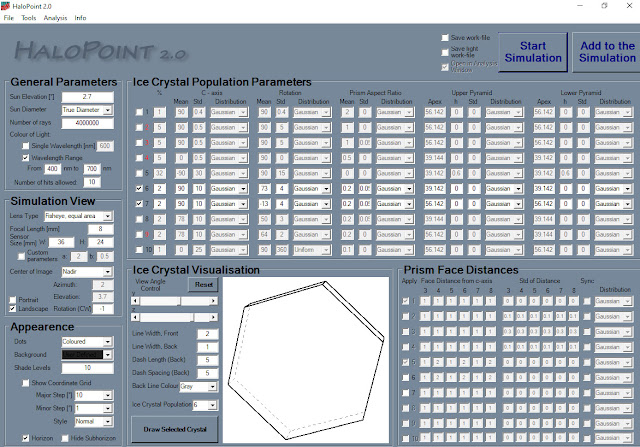 Below is a photo of the display towards the sun in Juva on 9 January. The 46 arc was prominent. No sign of 22 halo was seen on the hoar frost surface, but bright subparhelia were present in the shiny, mosaic-like ice surface further away. There are also two helic arcs visible on the hoar frost surface. These were detected only afterwards from the photographs, which is why they are only superficially documented. As their exact shape remained unclear, we used the parameters obtained from Tampere also for the Juva display. 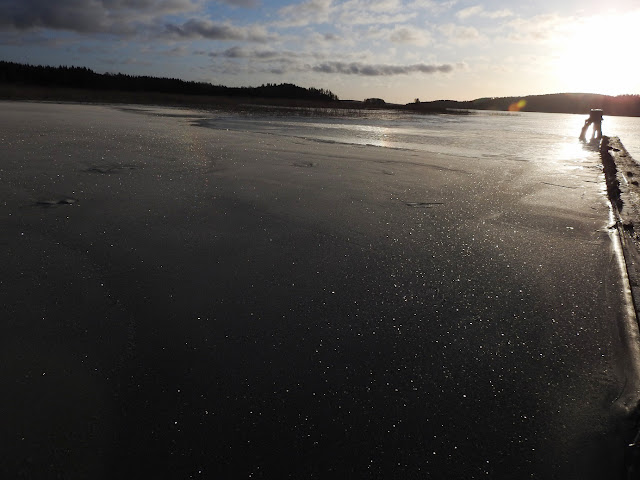 Strong vertically elongated subanthelion, as shown by the two photos above, was seen in Juva on 9 January (sun elevation of 6.3 degrees). Below is a simulation using the same parameters as for the Tampere display above, with instances involving two lowest prism faces removed. No X-shape is seen in the photos, but glints in single photos may not be abundant enough to draw out the actual arc.

Subanthelion in similar looking conditions was first photographed by Jari Piikki in the display on 22 December 2007 in Juva (link to the photo is in the text). 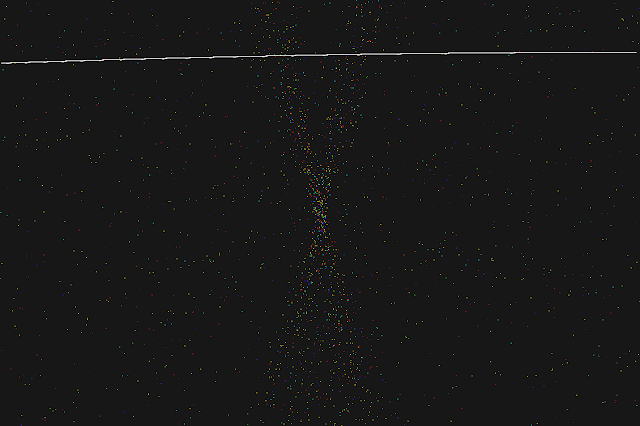 The arc at about 45 degrees from the subanthelic point we were not able to replicate with simulations. Below is an image of this arc in Tampere on 10 January. The arc occurs on the same surface as the helic arc display above. The image is an average stack of 57 frames, the bottom version has been blurred. 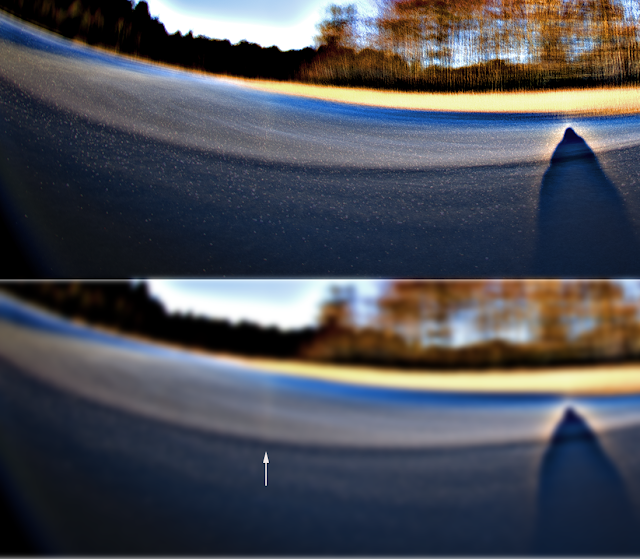 We note that in Tampere on 10 January, on another hoar frost surface in a different part of the lake, a bottom part of the 22 halo was actually seen. This would rather seem to support the non-curated simulation scenario. Unfortunately no photos were taken. The observation was made at midday when the sun was at over 6 degree elevation, whereas in the place where photos were taken, and where nothing below the sun at 22 distance was visible, the sun elevation was at the time of the photography 2.7-2.9 degrees. In future observations this should be something to pay attention to.

In Juva close up photos were taken of the hoar frost surface near the spot where the vertically elongated subanthelion was seen. Below is one of these photos, showing what appears to be plate crystals in nearly vertical orientation. This suggested, together with the halo composition, that the displays might be simulated using plate crystals in relatively fixed upright position and with two lower faces disabled due to attachment to the base. 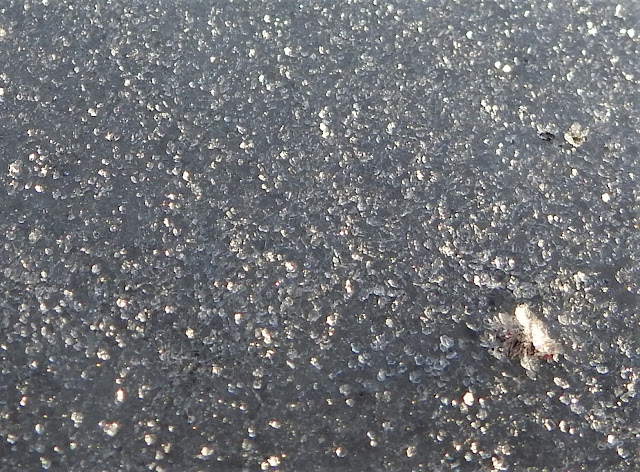 It seems that surface helic arcs can be produced by many kinds of crystals. A close look at the hoar frost crystals that lighted up a surface helic arc in Oulu on 30 and 31 January 2014 revealed that they were kind of blades with a step like structure. The light that made the helic arc passed through the crystals instead of returning back from the entry face as might have been expected. The step structure probably redirected the transmitted light. In Oulu displays the only halo was the helic arc and indeed that appears to be the case with most of the other surface helic arc displays that we know of, exceptions being these latest displays presented here, and a display observed by Jari Luomanen in Tampere on 27 December 2012 with two helic arcs.

Finally, in Tampere a trip to the lake was made also on the midnight between 10 and 11 January when the moon stood at 50 degrees above horizon (image below). Beautiful crystal glitter was seen with a distinct empty area at the subhelic point, where only a pale and diffuse reflection of the moon was visible. At this elevation two of the three helic arcs are located below horizon, the inner and the middle one (A and B). The inner one is detached from the light source and has become a huge, partially eaten doughnut encircling the subhelic point (essentially it is an oversized Bottlinger’s ring). Visually this was quite striking but photos are, expectedly, a disappointment. Additive stacking would have been needed to bring it to the level of visual impression. 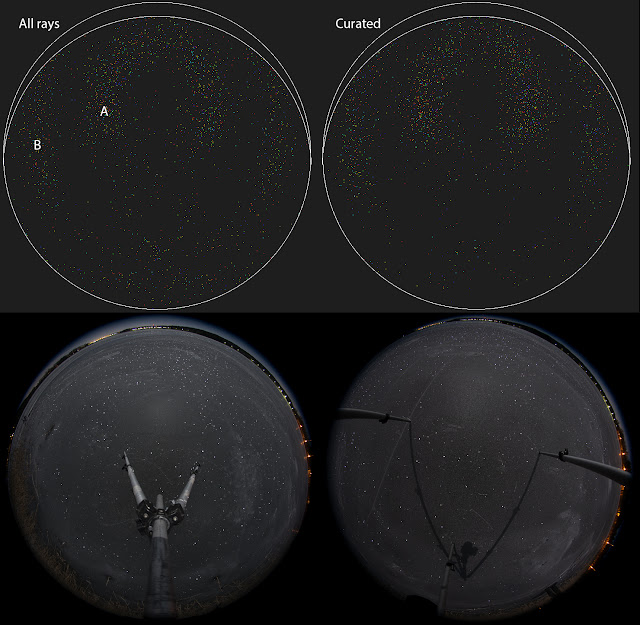 The story doesn't just end there.

In a discussion with Marko Riikonen, he pointed us to a similar Finnish moonlight display in 2013 (https://www.taivaanvahti.fi/observations/show/19422), during which a novel arc was discovered below the moon CZA. Seven years have passed and a repeat event is long overdue. Now the wait is officially over.

As more Siziwang Qi material emerged, one of them caught our attention. In the following iPhone photo by LI Tingfang, there seems to be hint of a long, sun-vex arc below the dazzling CZA.


With some minor processing, the arc stands out and appears surprisingly well defined. It looks exactly like the novel arc in the 2013 Finnish display.

Back then, Nicolas Lefaudeux managed to replicate the Finnish display scene with simulation and identified the novel arc to be a multi-scattered secondary CZA created by the moon pillar. In the Siziwang Qi display, strong sun pillar appeared in most material and multi-scattering has been proven intense, so it's very likely Nicolas' theory applies here too. After some experiments, we managed to reproduce the secondary CZA in simulation by introducing a large amount of pillar-making wobbly plates.


At first the appearance of the secondary CZA in both displays baffled us. It's hard to imagine how the long and diffuse pillars create such a sharp-looking arc. With the help of ZHANG Jiajie's simulation program we were able to dissect the arc and fully grasp the underlying mechanism.


These two secondary arcs together get us the sharp-looking novel arc in the Finnish and Siziwang Qi displays. As long as the pillar covers the horizon, the arc's overall appearance hardly changes as light source rises. The intensity of the arc peaks when light source sits low, which makes sense since pillar also peaks under the same condition.


When light source altitude drops below 15°, the arc's close proximity to the original CZA could severely hinder detection. According to the animation below, altitude 15° to 25° may be the most ideal observing window.


There's one thing in the actual display that doesn't go well with simulations. The azimuthal extent of the arc is very long in the actual photo, as if it'll go full circle. The simulated arc, however, hardly goes beyond the 46° halo. To make it longer in simulation, very thick triangular plates need to be employed, which doesn't sound very realistic. There're probably other light sources responsible for the arc's azimuthal extension and we'll need your help to figure it out : )