Kern with subhelic arc in the UK 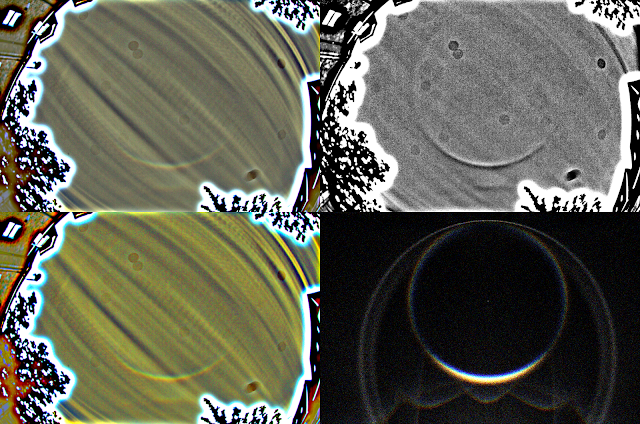 Berkshire (UK), 28 April 2019: Top left corner shows what's left after applying the gradient subtraction and stretching of histograms on a 38-frame average stack. Top right and bottom left, respectively, are with additional blue-minus-red subtraction and colour-channel enhancement. A HaloPoint simulation is included for reference at the bottom right corner.


While relaxing at home in the evening of a mostly cloudy day, a ray of light caught my eye and I checked the halo situation. In fragmented cirrus there was a mediocre circumzenithal arc (CZA) but not much more than that (my view towards the setting Sun is not that great). I took notice of the Sun being low in the sky so odds for Kern arc were on the rise: in the next moment I was setting up my DSLR to get some photos from my backyard.

CZA disappeared soon after I started shooting the first set of images, but it came back a few minutes later so I chose to do a re-run. Fortunately so, as the latter set turned out fruitful indeed in the post-processing.

The processed stack indicates presence of a faint Kern arc as an extension of CZA at the left. Slightly further to the left, there is a white arc that best matches the subhelic arc in the simulation. I think there is also a subtle suggestion of helic arc alongside of the subhelic, but this is less convincing. Furthermore, there are colored patches below the CZA approximately where 46° contact arcs would appear if there were Lowitz-oriented crystals in the mix. The simulation shown above is a synthesis of three distinct populations, including singly-oriented plates, singly-oriented columns, and Lowitz-oriented plate crystals.
Posted by Reima Eresmaa at 18:59