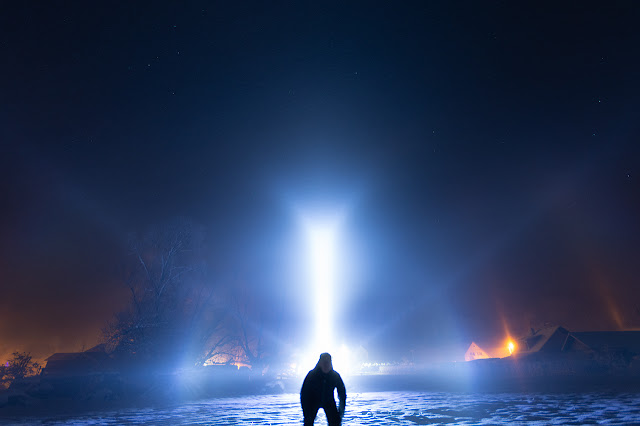 The diamond dust season has begun in the Czech Republic and on the night between 13th and 14th December it showed what it can do. Temperatures were droping below -10°C in many places, and with a fairly strong temperature inversion (+4,5°C with 300 metres), freezing fogs were forecast - humidity was very high.

The pictures were taken in Velké Karlovice near Kyčerka ski centre. A place I've been to a few times already. And it has its reason. There is another ski centre Karolinka located nearly 4 km from Kyčerka, and while Kyčerka is making halos like crazy, Karolinka is as dry as a bone. This time it wasn't any different. Although it took some time, the snow guns were able to create a marvelous display, one I've never seen in the spotlight before.

I arrived at Kyčerka sometime around 21:00 UTC and until 22:00 UTC, the halo making process was at a threshold. Wind was still blowing a little bit and the halos were changing between beautiful tangent arcs and weak light pillars within minutes. Then the wind calmed down and the valley was beginning to be engulfed in an ice fog.

I set up my spotlight and what I see is amazing. Beautiful and bright upper tangent arc with sharp helic arc is visible. I see Tape arcs as well, though not that well defined. But what I saw in the anthelic region amazed me the most. There was a clear and bright arc hovering above my shadow. Clearly, the Parry oriented crystals made sure the Tricker arc is nicely visible. What I didn't realize was that diffuse arcs were there, too. I saw them after I was looking at the photos in my computer.

It was really freezing and my hands and feet started to feel numb from constantly standing in the light beam. After I took the photos, I sped to my car to warm up, circled the valley for a bit to see if things have changed and then made a decision to go home, because I was tired and slowly transforming into a popsicle.

Next time I plan to place the lamp in a higher elevation for more halo forms to show up. And maybe update my spotlight a little bit, it has too wide beam, which illuminates the snow cover. I wasn't able to find a decent spotlight with a tight beam though, so I'll keep looking.