Some time after the publication of the 31 May 2018 display (see previous post), I returned to analyze the photos in order to take a closer look at one suspicious feature. After strong contrast enhancement, one stack showed a brightening in the area just above the upper 23d plate arc as though a halo may be present. At first, we assumed it was an artefact caused by strong enhancement of the 23d plate arc. However, after fine-tuning of the image processing, we have managed to better reveal this feature, and we can say with the enough confidence that this feature is an another exotic halo — an upper 28d plate arc.

For simulating this halo, I have used a poor plate oriented crystals with a triangular habit, which consist only of a lower exotic (2 0 2 3) pyramid. These crystals are also responsible for the 28d halo, the very faint parts of which you can try to see diagonally upwards from the sun on colored photos above. I have used a triangular habit instead a hexagonal one to remove a 13d halo, which is absent in the observation. In the table below you can find all the crystal populations used in the simulation, and also their some parameters. For ease of comparison, the simulation is placed in the photo scene. It moves into alignment with the photo, as far as field distortion (and other geometric imperfections of the resulting image) allows. As always, the simulation was made with the aid of Jukka Ruoskanen's HaloPoint 2.0. According to the photo, it seems there is faint 18d plate arcs just above 19d plate arcs. If that is the case, this feature makes the display even more similar to the Lascar one (on correspond sun elevations, of course). In order to display this feature in the simulation, regular pyramid crystals in a poor plate orientation were used. But mostly these crystals contribute to 18 and 23d halos. The crystals do not have any prismatic faces because 9 and 24d halos are not present in the display. Based on appearance of the 28d plate arc, the responsible crystals were rather small. Unfortunately, HaloPoint does not allow to change size of crystals, therefore, it is not possible to display the fuzziness of the arc. 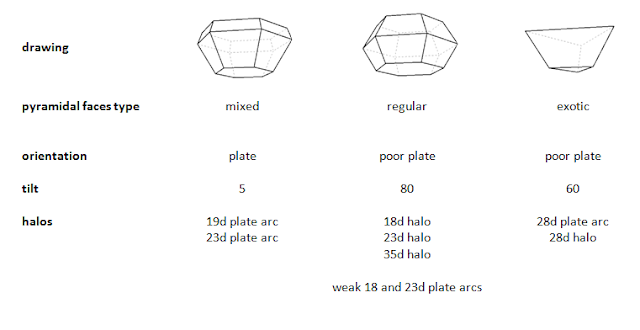