When I first noticed the display at 08-10 local time on 31 May 2018, it was already well-developed. The high cloud layer was very thin and it was visible only in the area close to the sun. At first the display consisted of an upper 23d plate arc and an upper quarter of a 23d halo. A little later I noticed arcs as light spots in the side area of the sun, that reminded me lower 24d plate arcs. 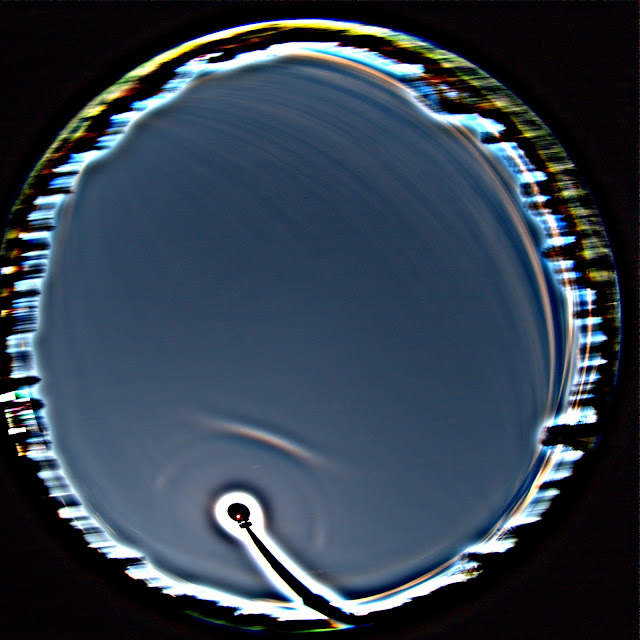 When I processed images, I noticed that these arcs are more like 18d plate arcs than lower 24d plate arcs. But during the observation I distinctly saw that the arcs were located at an elevation lower than the sun, while 18d plate arcs are always located at the same elevation as the sun. I applied stronger processing and revealed a gap between the arcs and a 18d halo. As a result, it became clear that the arcs are exotic 19d plate arcs that were first observed during the legendary Lascar display. In addition, a trace of exotic 28d halo was also revealed.

The result shows quite good agreement with the observation, except for an exotic lower 3d plate arc. There are two possible reasons for it. The first is that a glow around the sun has much more intensity than halos presented here. It does not allow to reveal a 3d arc, unlike the Lascar display, whose observing place was located at an altitude more than of 4000 m above sea level. At this altitude the atmosphere has a low level of aerosols, and therefore the glow around the sun is very small, and the sky background is dark. My observation point was in Pskov Oblast, which has a flat topography with usual atmospheric conditions. The second reason is that exotic crystals may have triangular, but not hexagonal habit. The 3d arc disappears when triangular exotic crystals are applied.

The 1997 Lascar display ( http://www.thehalovault.org/2008/12/lascar-display.html ) opened the door to a world of exotic halos. Halo researchers and enthusiasts alike have all been eagerly waiting for a repeat event. Twenty years have passed and not a single reappearance was reported, until recently.

On July 20 2016, photographer Jin Hui captured an odd-radius halo display from Chengdu, China and later shared his photos with the Chinese sky-watcher community. The significance of the display wasn't immediately recognized and the halos involved were mistakenly identified as ordinary pyramidal plate arcs. Fortunately, the photos were brought back up on the table for better scrutiny earlier this year when members from the community performed housekeeping on past digital archives. 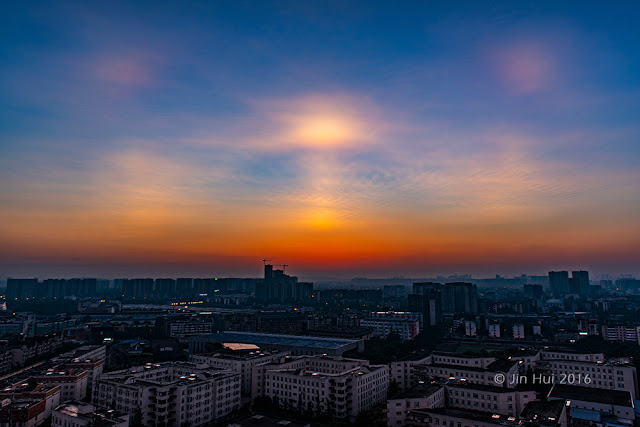 In the reprocessed images, we noticed that the two colored arcs sitting below the 35° plate arcs seem too far out to be 24° plate arcs. The observation was quickly verified by simulations - the arcs are actually positioned at an angular distance of around 28° from the sun. The overall appearance greatly resembles the 28° plate arcs in the Lascar display at low solar elevations ( http://www.thehalovault.org/2008/12/lascar-display-v.html ).
Dr. Nicolas Lefaudeux, who carried out in-depth research[1] on the Lascar display, confirmed our findings with his outstanding post-processing techniques. In the stacked B-R image, the arcs exhibit excellent color separation. At this point the presence of the arcs is unmistakable - we now have the world's second known record of the 28° plate arcs.
Compared to the Lascar display, what happened in Chengdu is different in several ways:
Unfortunately, the lack of other exotic arcs makes it impossible to pin point what produced the display. At least two types of crystals, pyramidal crystals with 30-32 pyramidal faces and octahedral cubic ice crystals, possess the interfacial angles suitable for 28° plate arcs ( more discussions can be found at: http://www.thehalovault.org/2018/09/28-plate-arc-captured-in-haikou-china.html ).

Facing a dead end with the Chengdu case, we took a deeper dive into the archive hoping to find more sightings of the same event. The effort paid off with three photographic records recovered. Though these records contain no additional exotic halos either, they do help us paint a better overall picture of what happened geographically on July 20.

100km southwest of Chengdu, photographer Lin Yong recorded an almost identical scene from the summit of Mt. Emei, except that the 28° arcs are much weaker. Further southwest in Yuexi, crystal quality in the clouds plummeted. Founder of the Chinese sky-watcher community Ji Yun saw only a poor, traditional odd-radius plate display. These reports combined suggest that crystals responsible for the 28° arcs only appeared regionally that morning and probably require more demanding conditions to form.
According to the photographers, the halos over Chengdu and Mt. Emei quickly weakened and disappeared after sunrise. However, four hours later on Mt. Emei, Yang Jialu captured a display with 18° and 23° plate arcs with her handphone. Unfortunately the 28° area above the 23° plate arc was left out of the frame, making it impossible to know whether the 28° plate arc showed up or not.
It's a real bummer that the display didn't last longer after sunrise in Chengdu and Emei. Studying how the 28° arcs changes with solar elevations could be another approach to closing the case. Anyways, what we have here is undoubtedly a milestone on our way to fully working out the Lascar puzzle. Till then, let's enjoy the era we're living in where there're still puzzles to be solved.