Cult of the Natural? 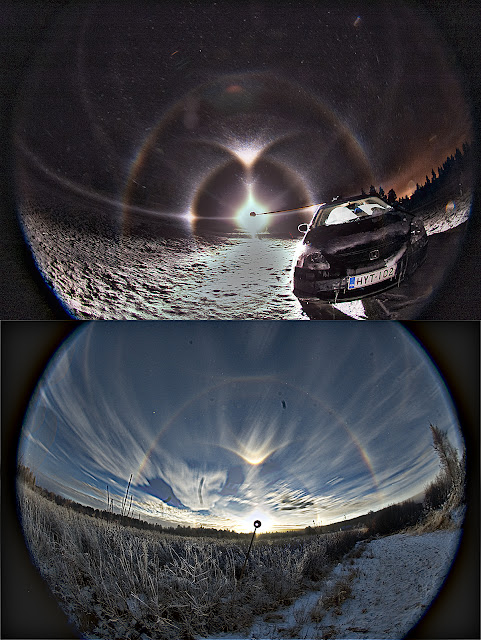 Occasionally, I get the impression, rightly or wrongly, that some observers consider halos which have been produced by spotlights to be in some way ‘inferior’ or ‘artificial’ when compared to those which have been produced either by the sun or moon. This position is never explicitly stated but is, rather, vaguely hinted at as if there is some unspoken ‘cult of the natural’ operating in the background. The purpose of this post, therefore, is to pose a few questions to our readers and to solicit their thoughts and opinions on the matter.

For example, do you think that ‘natural’ halos produced by the sun or moon are in any way better than those produced by a lamp? In this context, what do we mean by ‘natural’ and ‘better’? Likewise, are we to consider halos produced by a lamp to be in some way 'inauthentic' or unworthy of our attention? If that is the case, on what do we base our conclusion? Then again, is there really an inherent dichotomy between ‘natural’ and ‘artificial’ in this regard or is the light source completely irrelevant? Finally, are lamp generated halos merely tolerated or deemed acceptable only in the absence of a solar or lunar equivalent?

My own position is that I don't really have a problem with spotlight displays. Whilst I am always pleased to see a good quality solar or lunar display, I consider halos produced by spotlights to be equally valid and at times arguably necessary in the pursuit of the highest level of halo research. Indeed, I would suggest that lamp work has the additional advantage of repeatability (given the presence of the right crystals) and also that an observer can adjust the elevation of the lamp to produce specific effects; such flexibility would simply not be afforded to those who opt for a ‘natural’ only light source approach. Historically, many halos would not have been discovered if it were not for the adoption of this technique, rather they would have remained theoretical possibilities. In this way, I think it is reasonable to suggest that lamp generated halos have demonstrably accelerated halo research.

In closing, I offer above and below two images for your consideration. They were both taken by Marko Riikonen, the world's foremost exponent of the spotlight technique. The display was photographed on 5th/6th November 2008 in Rovaniemi, Finland, one set taken during the night using a lamp, the other set taken the following day. Both images were photographed in roughly the same location and the swarm responsible for the display had remained fairly stable during the intervening period to facilitate this comparison. The images are virtually identical, the only difference being the light source in each case. Are we to conclude then that the daytime images are superior to those taken several hours earlier during the night? Is there really a qualitative difference between the two or is the 'cult of the natural' just a psychological construct? Your comments and opinions as always are greatly appreciated.
Posted by Alec Jones at 09:48