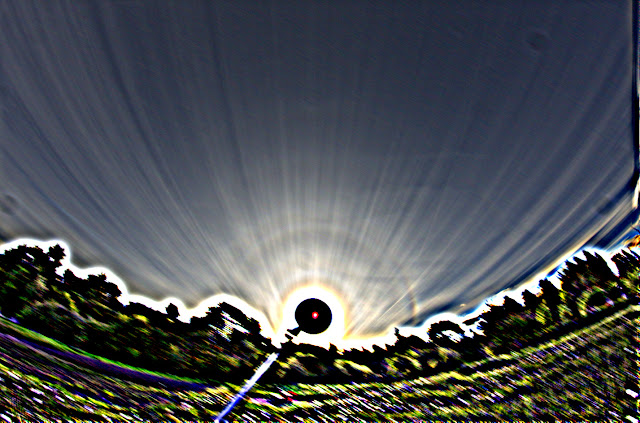 It was a weak odd-radius display which contained not only familiar pyramidal halos with radii of 9, 20, 24 and 35 degrees, but also a mysterious 13° halo! You can notice this diffuse 13° ring between 9° and 20° halos on the image above. You can also notice that the 20° halo is brighter than the 22°. The 35° halo is clearly visible on the image below.

With the naked eye only parhelia were visible during the display. The display was short and lasted about an hour and a half. 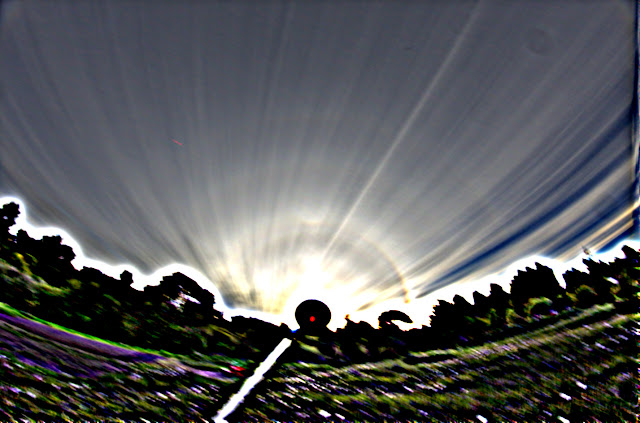 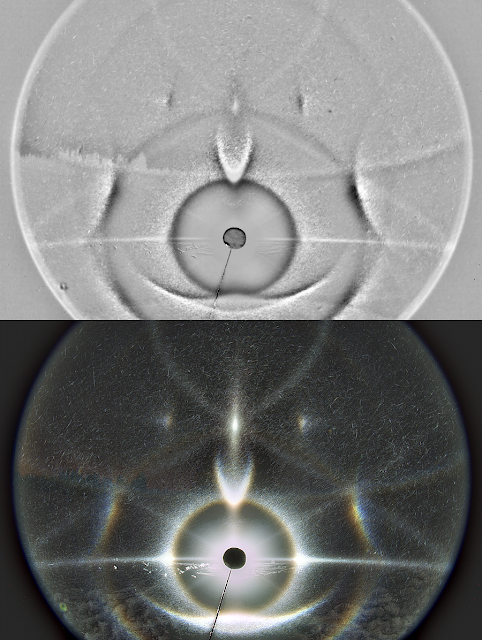 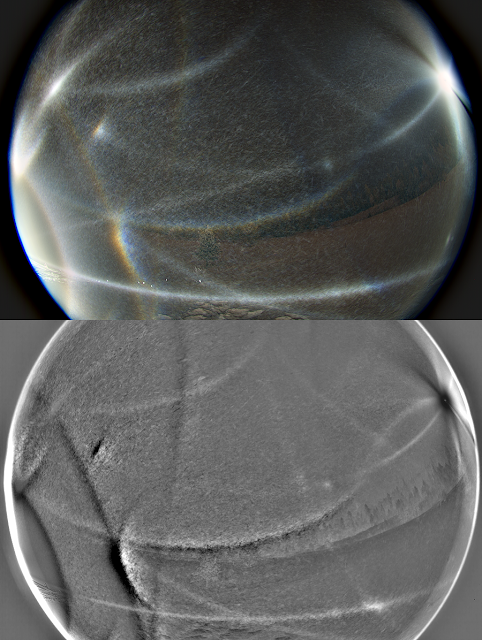 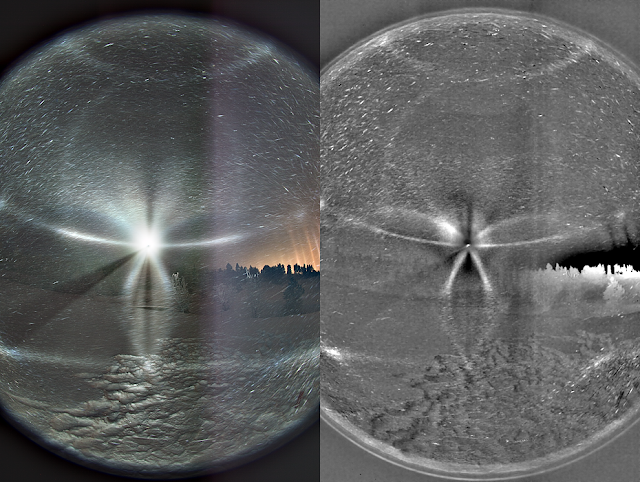 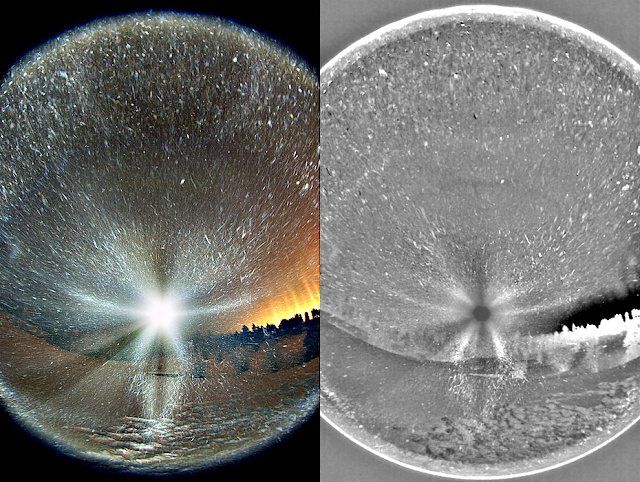 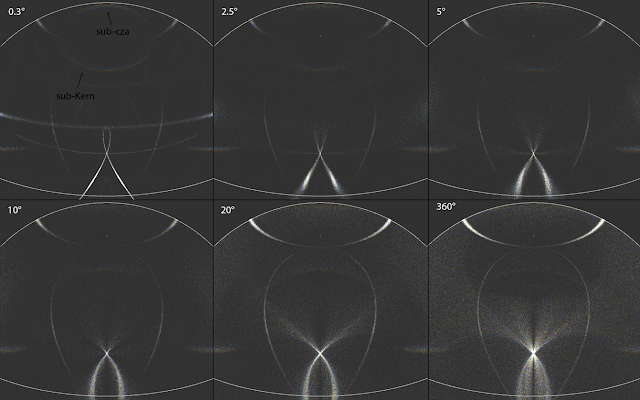 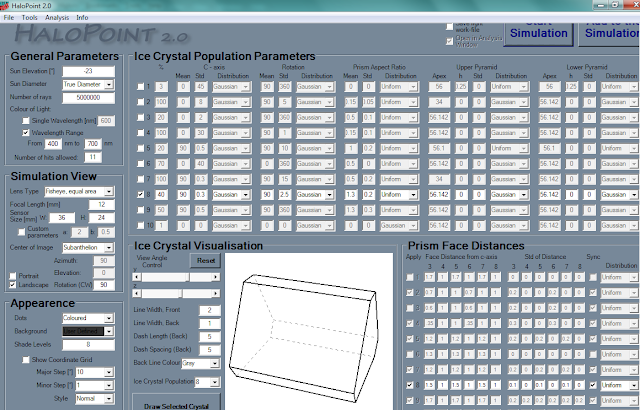 At the begining of the display, beautiful cirrus covered the sky, but I did not notice any halos at the time. When I came out a little later, I was surprised to see a bright parhelion and a middle Lowitz arc which crosses it! Cumulus limited the display, so I could observe halos only in gaps between these clouds. There was one short episode when I saw bright upper tangent and suncave Parry arcs. The following rare halos were found in the stacks: 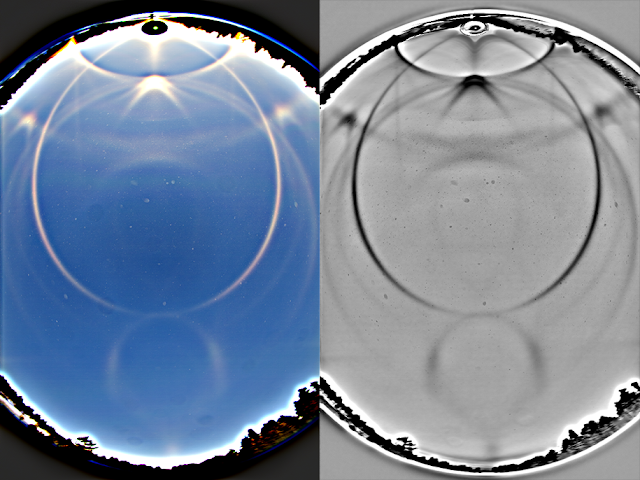 This display came into existence suddenly, when in the morning sun came out from behind a clear cut edge of a receding cloud area. Some points:

- Ounasvaara arc in a solar display
- There is a kind of extension to the Ounasvaara arc which makes it drop shaped. The extension is responsible for the narrow end of the drop near the helic arc. It seems to be present also in the first Ounasvaara arc display. It's caused by the same raypaths as Ounasvaara arc, but with an added basal face reflection.
- 120° arcs. Simulations say they are formed in Lowitz oriented crystals. The halo is not centered on 120° parhelia: it lies along a circle of 60 degree radius centered on the subanthelic point. It is made by raypaths that in plate oriented crystals give 120° parhelia and sub-120° parhelia.
- An uppervex Hastings in solar display. All the others – the spotlight ones – are indirect detections, because the lamp has always been at an elevation where Wegener and Hastings overlap.
- Helic arc is brighter than subanthelic arc. I could simulate this by lengthening the Parry crystals, but then the simulation went wrong in other ways too much. If we can't get this right, it kinda tells me we don't understand this display. I was told that I probably regret of not taking a crystal sample. It had not occurred to me, but once I was reminded, it was obvious that I should. In the simulation no column shaped crystals were used. It would have been of interest to see whether the crystal sample concurred. 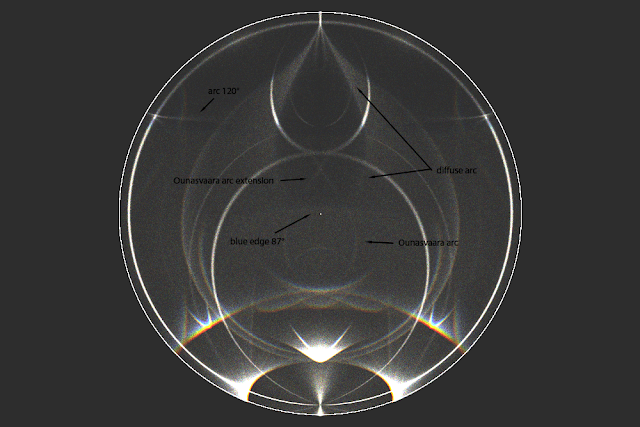 I also regret of photographing this with Nikon D3200 which is why we have to suffer all the artefacts. Not that there would have been any choice at the time, but about a month earlier I was offered a chance to borrow D800 for my halo hunts. I declined in fear of breaking it. A third regret, that was more personal and could have been easily avoided, was that I didn't have mirror with me and thus did not see many things. Didn't see, for example, the 120° arcs, Hastings / Wegener separation, both of which would have been visible easily with mirror. Spotting the 120° arcs in situ – that would have been something.

The display occurred at around -17° C. You don't expect a major display at such temps in Finland. But sometimes they do occur, like was the case with Mikkilä's Kern display in 2007. Low supersaturations were in my mind the key here. They were low because the night was cloudy and thus the diamond dust could not have spawned before the morning when it started clearing up. And at that point, with the sun above horizon at such late time in the season, the air was not getting so much colder as for supersaturations to increase to the point of crapping the display (which is the usual scenario).

This post was modified on 15 Oct 2017 to replace the simulation with a new one. It has labels added to mark some of the features that seem to appear in the photos (sorry for the degree numbers having placed at the end of halo names, there is some glitch in Photoshop which forces this). Also, the parameter file was replaced becase I adjusted the parameters of the column oriented population a bit, increasing crystal h/d from 0.5 to 0.8 and making it a little more triangular. This more burned more fine grained simulation has gained features that are not seen in the images. Possibly with a better camera some of these could have been dug out from the display.

The post was further modified on 21. Oct by adding "originals" of the stacks. 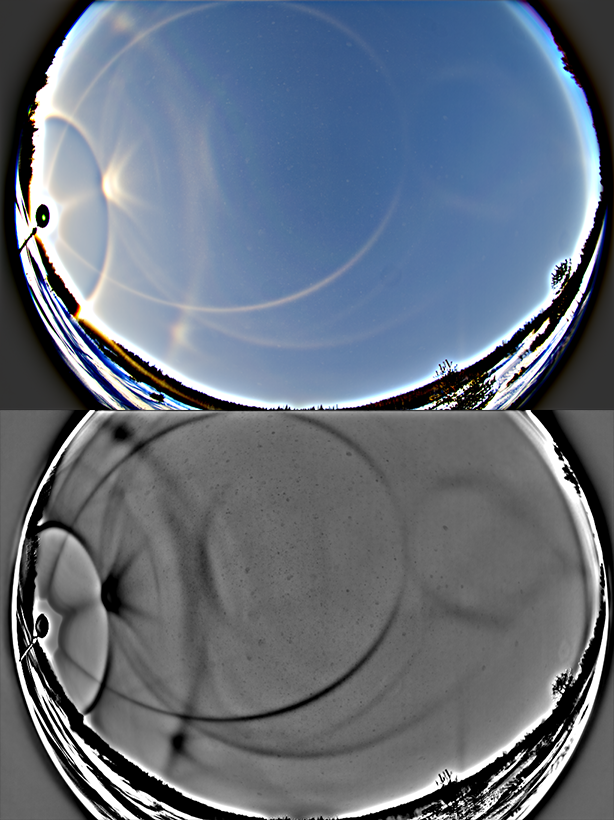 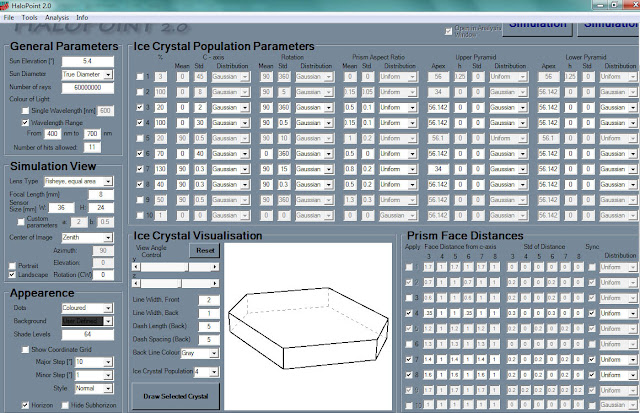 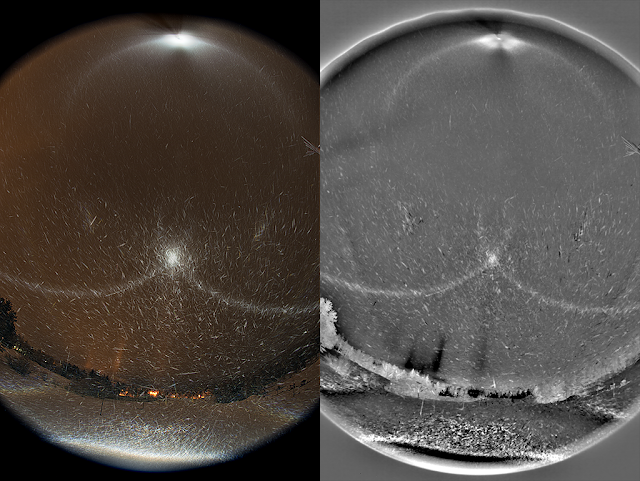 Here is the last post in the series. High sun stuff (only turned upside down). A "subhelic 46° infralateral arc" is visible on both sides of the subsun in the above image. Below are two relevant simulations (for 52 degree elevation), an arrow marks the halo. Crystal parameters, given further below, are identical for both simulations. 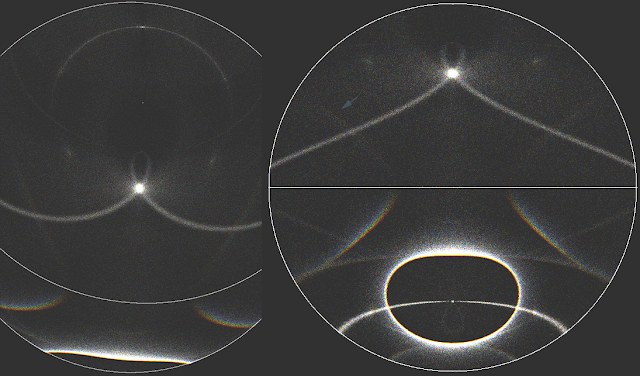 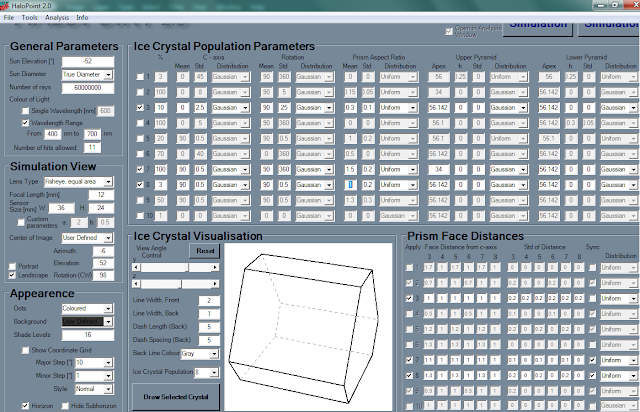 Below is one more photo for a higher light source elevation angle. Judging by the location of the blue circle segment, I would say the elevation is about 57 degrees. The display was already at decline at this point and before midnight the halos were gone because the fog disappeared. 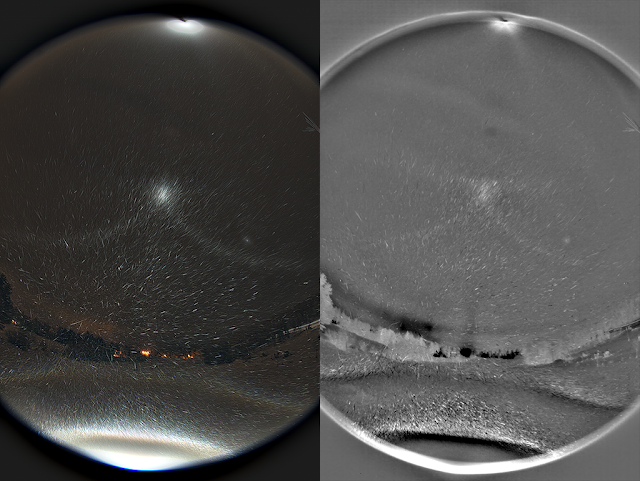