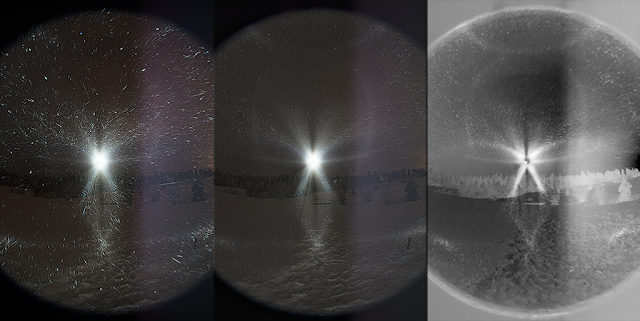 Opposite to the lamp I could see something that thus far has appeared for me only in simulations: diffuse arcs extending all the way from the anthelic point to the subanthelic point. The effect is not that impressive in photos. Neither is the anthelion which really caught my attention: an anthelion formed against the ground in just few meters of air space. In the image above I had tilted the camera sideways so that it is not aligned with the central column of the tripod. This makes the shadow in the middle of the arcs less disturbing. In the image below, taken earlier, I had not yet done this move and there is a more prominent shadow. The image above is a bit spoiled because of spotlight light getting in from the viewfinder. I thought the camera was broken and bought a new one two days later... On one night in the beginning of January Mikkilä called while I was out photographing at around -35° C (-31° F) temps, and he told it was about light leaking. I didn't buy it, having a false memory of the effect appearing also when I shot towards the lamp. In the end it had to dawn that Mikkilä was right and also a feeling (maybe false too) that I must have known this thing in the past but my brain had buried it too deep by now. 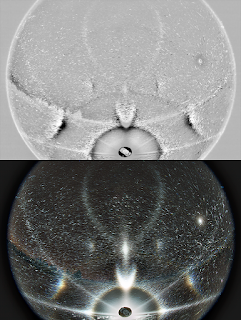 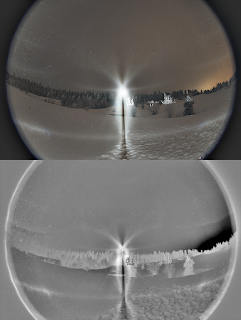 Below are two more shots showing the anomalous Hastgener. These stages of the display are not really that poor (see part II), was I too hasty to make that connection? (Somehow I succeeded in not seeing these photos when writing the part II even if they were ready made in the same folder). Notice the left side subparhelion which seems tilted in the first image which is a single frame. The breeze makes localized, passing disturbances in crystals' orientation and can cause effects like this. At least that's what I seem to think now, but who knows if it is true. Anyway, I think there is a frame from stacking series from one other display where the other subparhelion is completely missing. 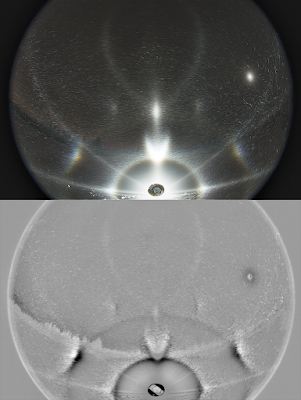