The year is gearing towards winter, the first glitter in northern Finland expected in less than two months. While waiting for that, I think I should continue clearing the backlog of last winter's results from Rovaniemi before new stuff starts piling up on top and risking buried-in-drawer fate. There is still plenty to show – even what might be called as major displays.

To not inflate it right away, lets start with a more moderate, but nevertheless interesting display. On the night of 16/17 January 2017 a display with full set of kaleidoscopic arcs appeared, and towards the end of the action, when it turned plate dominated, I tried to get the blue subsun photographed.

Earlier past winter and the one before, on a couple of attempts at blue subsun that I had myself or with friends, the aim was to get the lamp elevation right so that the blue would be exactly at the center of the subsun (otherwise you might feel a tinge of uncomfort calling it a blue subsun). It is a precision job: the optimum is at right about 58.5 degree light source elevation, with the tolerance of around half a degree, after which you may not be able to sell it to a demanding customer.

We did't get it quite right then, or the display was otherwise uninspiring, but this time there is a clear blue color passing pretty much through a middle of a well defined subsun. Connoisseurs might still see manoeuvre for one or two tenth of degree improvement, but I am good enough with this to not pay effort to go after it no more. However, there is some other stuff that warrants visiting the extremely low lamp haloversum (like sub-cha and its extension), so blue subsuns are certainly going to come along with the ride. 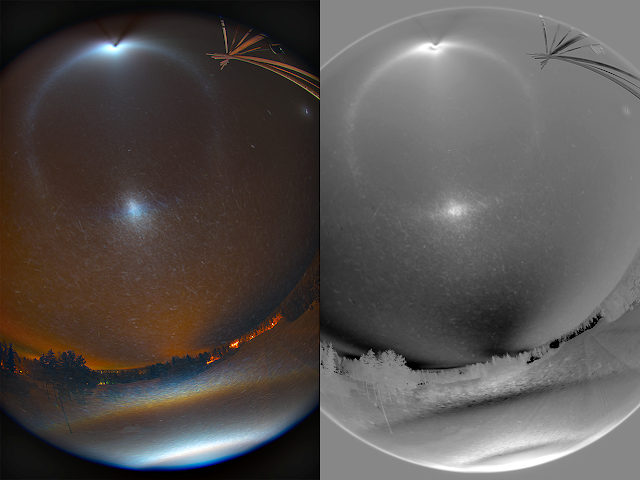