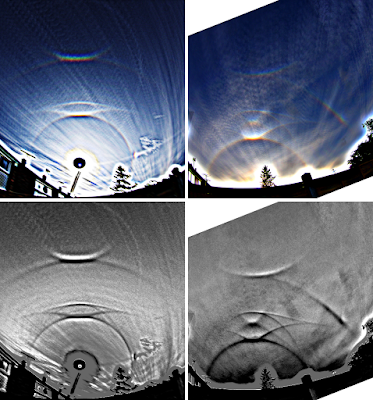 I have recently entertained myself with the idea of introducing a mutual dependence between the orientation and shape parameters. This could reduce some of the complexity currently associated with the simulation. In such framework, even complicated-looking displays can be reasonably well simulated using only a handful of user-specified input parameters. Furthermore, the idea of only one crystal population in one halo-making cloud is conceptually appealing. 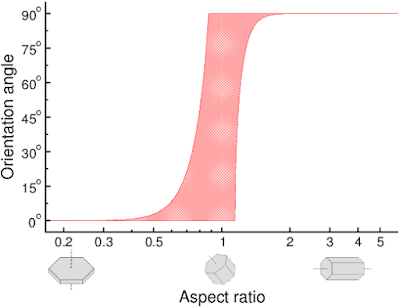 To illustrate the approach I've been thinking of, the figure above shows a possible orientation-shape dependency. Let's consider, for now, the aspect ratio as the only measure of crystal shape. The y-axis representing the angle of crystal's axis with local vertical, perfect plate and column orientations correspond to values 0° and 90°, respectively. We assume a Gaussian distribution such that 95% of crystals (at each aspect ratio) go within the shaded region. In the regime of equidimensional crystals in the middle, the orientation angle takes all values between 0° and 90°. Otherwise, it is constrained around either 0° or 90°, depending on whether the shape is more like a plate or rather like a column. The constraint is particularly strict in the extremes at far left and far right, indicating that perfect orientations are most probable to occur with the thinnest plates and longest columns.

I have produced the all-sky simulations below by running a home-made simulation program and assuming the orientation-shape dependency exactly as laid out above. Each simulation uses only one crystal population, and the six simulations differ in only two input parameters that control the distribution of crystal aspect ratio. At the top, the distribution is set narrow such that the crystals are either (a) all plates, (b) all equidimensionals, or (c) all columns. In panels (d)-(f), the distribution is made gradually wider around the equidimensional mean. Clearly, changing just two input parameters is enough to allow reproducing a variety of displays. 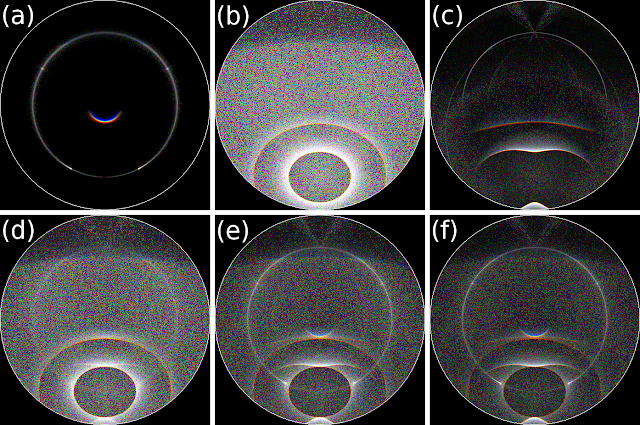 To simulate occurrences of Parry and Lowitz arcs, we need to introduce another dependency to constrain crystal's rotation about its axis. In my trials, I have assumed that the rotation averages to that required in the Parry orientation, but the spread around the mean rotation depends on crystal base shape (see the figure below for illustration). Only crystals with a considerable tendency towards either triangular or tabular habit are assigned with spread small enough to allow Parry arcs to form. For conventional hexagons and other possible base shapes, we set the spread large to make the distribution of rotation angles essentially uniform. 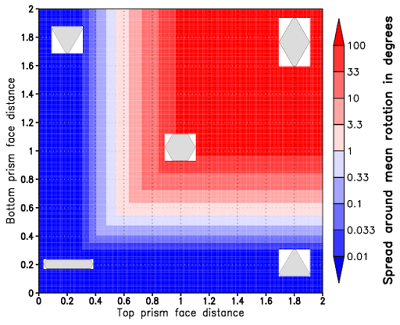 Now, using the two dependences as laid out above and running my home-made program, panels (a)-(c) below illustrate the effect of varying the distribution of column crystal base shapes alone. Four input parameters are used to control these variations. In panel (a), all crystals are nearly regular hexagons in their bases. Halos attributed to the column orientation are well reproduced, and no signs of Parry arcs are seen. In panel (c), crystals are constrained to the tabular base shape. This scenario produces only halos associated with the Parry orientation. Panel (b) is for the case where the base shape varies considerably, such that halos associated with both column and Parry orientations are represented. 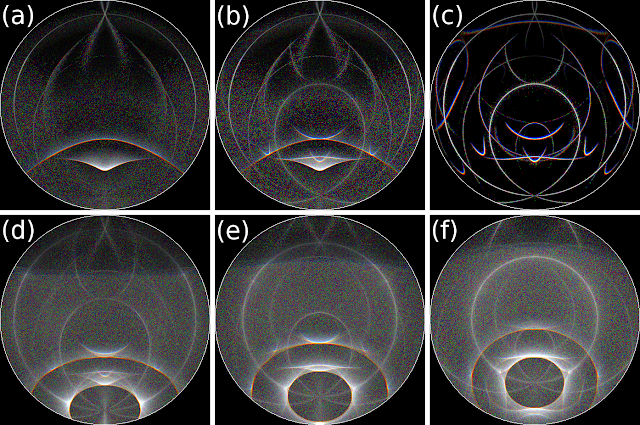 To get not just Parry but also Lowitz arcs, one needs to take benefit from the two types of dependence at once. This is attempted in panels (d)-(f) for three different solar elevations. Although the all-sky projection makes direct comparison slightly complicated, I'd say the similarity of panels (d) and (e) with the appearance of the 22nd September display is remarkable.

While assuming the same dependencies to hold for the behaviour of orientation and rotation angles as a function of crystal shape, all variations in the simulations shown here were produced by changing just seven input parameters. One goes for the solar elevation, and the remaining six were used to characterize crystal shapes.
Posted by Reima Eresmaa at 10:47 4 comments:

Email ThisBlogThis!Share to TwitterShare to FacebookShare to Pinterest
Labels: simulation

Cross and Crescent from 1664


On 3 August 1664, a curious phenomenon made the inhabitants of Pápa, Hungary wonder. Between 11 and 12 pm a shining white cross appeared in the sky together with the crescent Moon. They seemed to be fighting for about an hour, either the one or the other overcoming, but by midnight the Moon had deferred to the cross, which – according to the contemporary description – might be a good omen.


Two anonymous engravings eternalised the apparition, both from the late 17th century. They are part of The Graphic Collection of the Hungarian National Museum, a collection which also contains a few etchings depicting historical halo observations. These have earlier been dealt with in a Hungarian language article [Farkas A., Kiricsi Á., Klemm L. (2011) „(R)égi csodajelek, 17-18. századi halójelenségek a Magyar Nemzeti Múzeumból”. Fizikai Szemle 61 (12): 407-413.], and are going to serve as the basis for the next historical mini-series of The Halo Vault.

Of course, we cannot say with certainty what the 17th century inhabitants of Pápa saw exactly, but presumably it was a halo phenomenon. The description might indicate a lunar pillar with a stretch of a cloud, or even a pillar with upper tangent-arc. The time given in the contemporary accounts is rather problematic, however. The Moon was almost full and already 21° high in the sky at 11 pm, so the implied lunar pillar can certainly be ruled out. But if we continue theorizing, and suppose that the date given is still according to the Julian Calendar, the idea of a pillar is much more likely, as the Moon in the given time-slot was between -3,5° and 6° (though not in such a thin crescent shape as in the images). In Hungary the Georgian Calendar had been in use for almost 80 years in 1664; but we know that at least one of the two engravings is by a German master, and in the Protestant areas of Germany the adoption of the calendar reform was much slower. In some parts the reform was only enacted in the 18th century. But again, this is only a hypothesis, we cannot fully decipher the two images and their descriptions.

The heavenly cross appearing in the sky was considered a mysterious sign, and as usual with such unaccountable phenomena, reports tried to authenticate it in various ways. As we learn from the text below one of the engravings, the cross was not only visible in Pápa, but also some 120 kms away, near Vienna, the seat of the Habsburg monarchy. The other document mentions that even soldiers witnessed it, thus giving the account more credit.

The cross subjugating the Moon could easily be considered a good sign in 17th century Hungary. Most of the country at that time was under Ottoman Rule, and the Christian cross overcoming the traditional Muslim symbol of the crescent must have been thought by many as a symbol of divine providence against the Turks.