The halos I got earlier today ended at midday but while up mowing the ATV and foot trails I saw halos reappearing! I immediately saw a nice bright lower 9d plate arc my second one since 2002 and both lower 24d plate arcs my best to date! As the clouds moved in closer the halos got better the 18d plate arcs got bright and rather colorful and actually showed a slight curve. At 7:00PM when the sun got low enough for it to happen I got upper 9 and 24d plate arcs and those were two new halo forms for me. 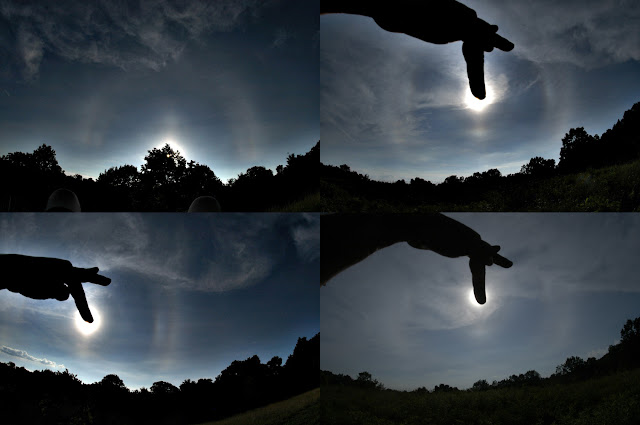 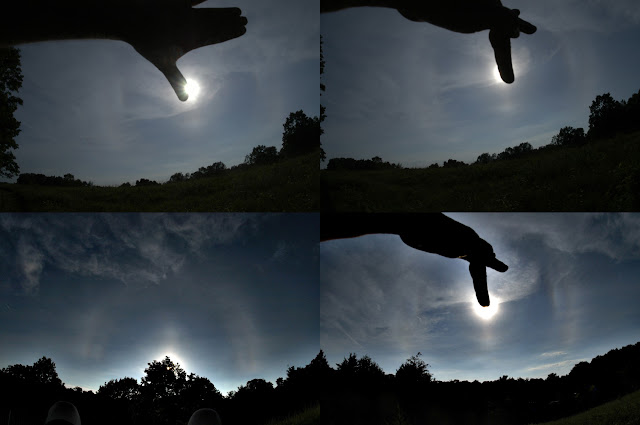 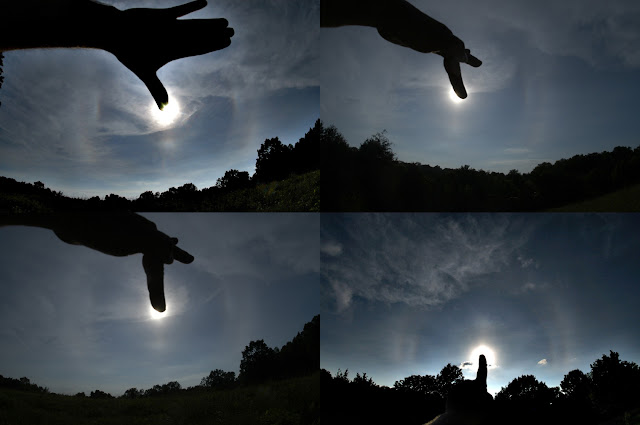 Posted by Michael Ellestad at 03:19 2 comments:

Reign of the Pyramids

Well seems like most of the rare halos I have been getting are pyramidal this year and I like pyramidal stuff. This morning I got up and later on 18 and 23d halos formed along with a nice upper 23d plate arc and 18d plate arcs. Later on faint 9d halo and when looking at the convex mirror faint 35d halo and it shows up in Photoshop. 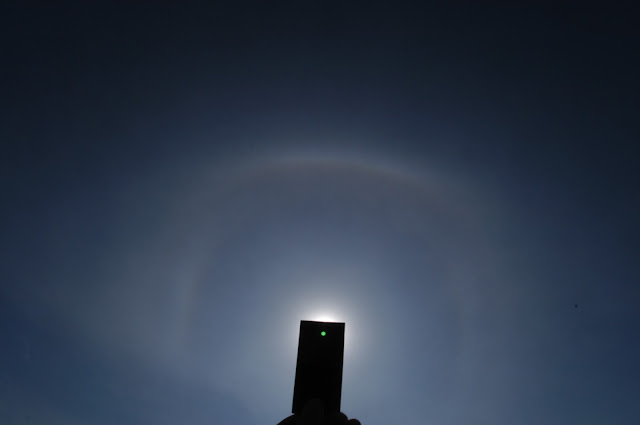 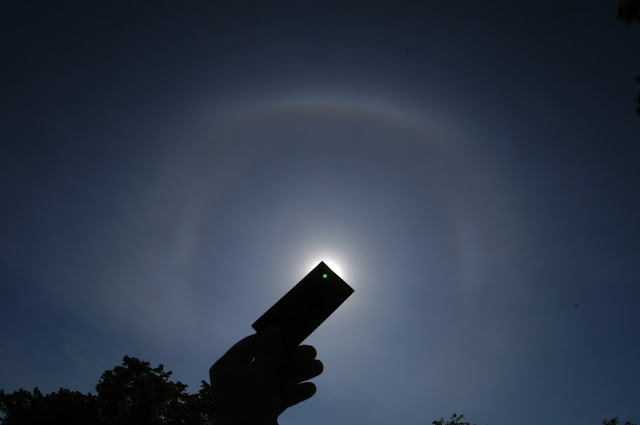 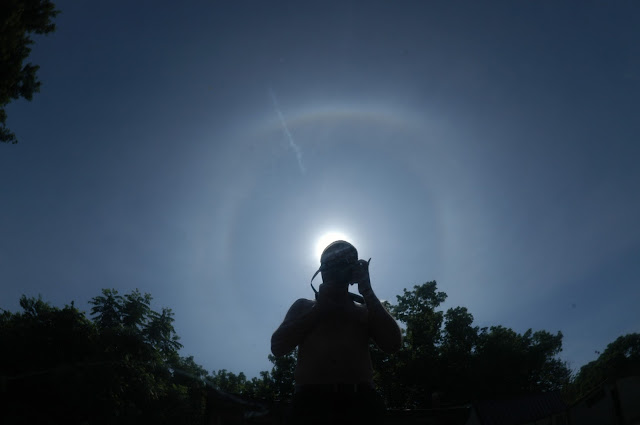 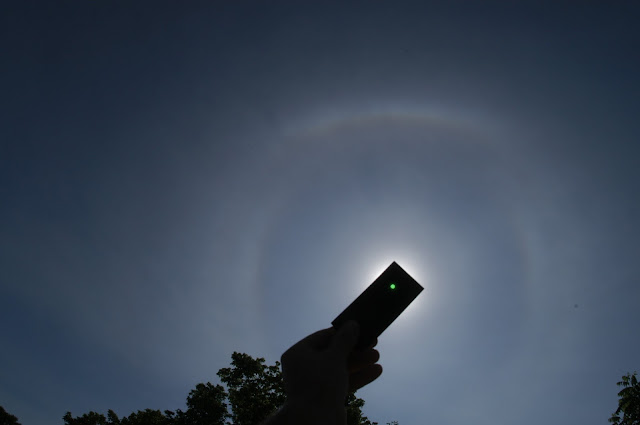 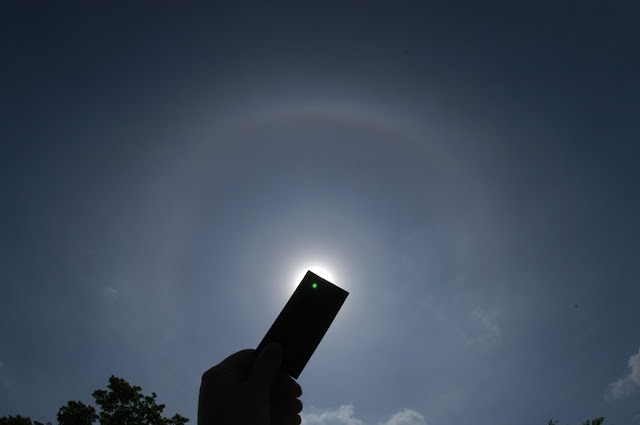 Posted by Michael Ellestad at 16:20 2 comments:

Plates 1 and 2 for the Bravais book

The internet copy of the Auguste Bravais book "Memoire sur Les Halos..." has incompletely scanned figures. So I went to the Kuopio repository library to have them copied from the original. Earlier, before this only Finnish copy of the Bravais was moved to repository library, I had already copied plates 3 and 4. Given below are now full reproductions also of plates 1 and 2, that a worker at the library kindly scanned.

There is a re-print for sale of the Bravais book, but I have heard it too has incomplete figure plates. Possibly it is made from the same scan that is available online. 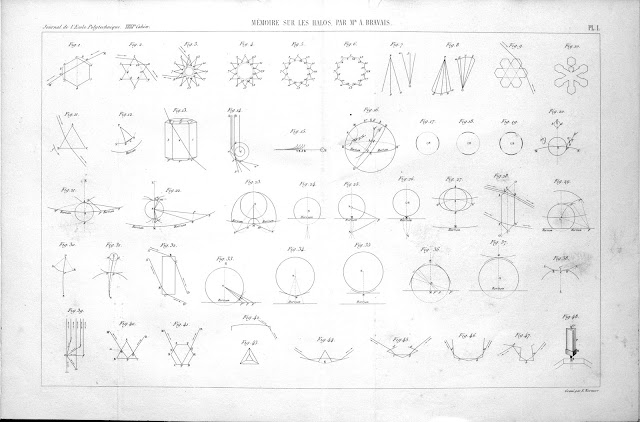 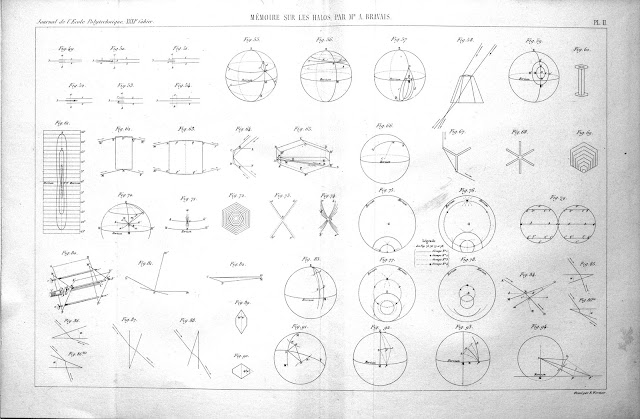 Posted by Marko Riikonen at 15:33 No comments: 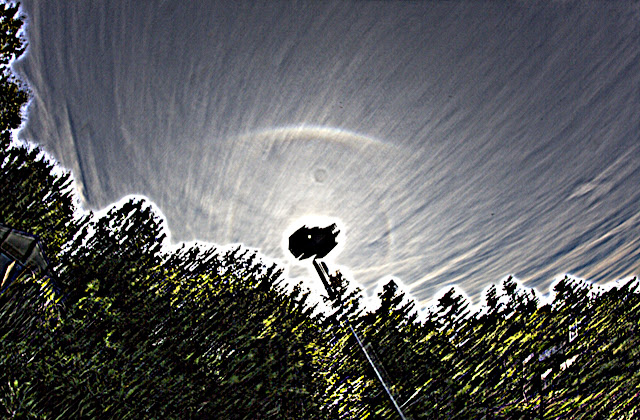 On June 4th a cold front was advancing towards Czechia with thick Ci/Cs cloud cover ahead of the front.
Zbyněk Černoch was keeping an eye for any potential halos that might show up. As soon as the cloud cover started to sublimate (it was nicely visible on satellite imagery), bright pyramidal plate arcs showed up. The 23° parhelion is very easily distinguishable with its characteristic shape. 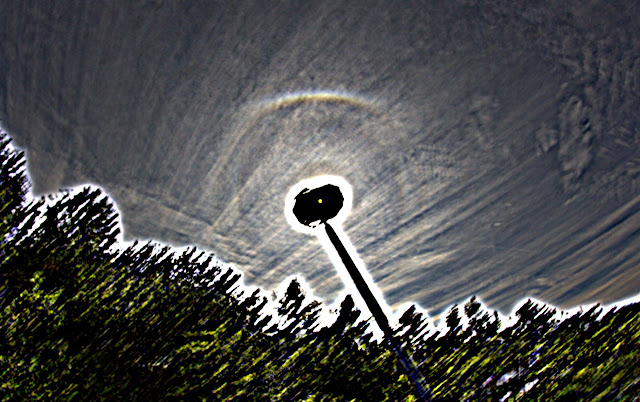 A few moments later, the 23° parhelion lost its initial shape, but became a little more coloured.

The same photos, with B-R processing: 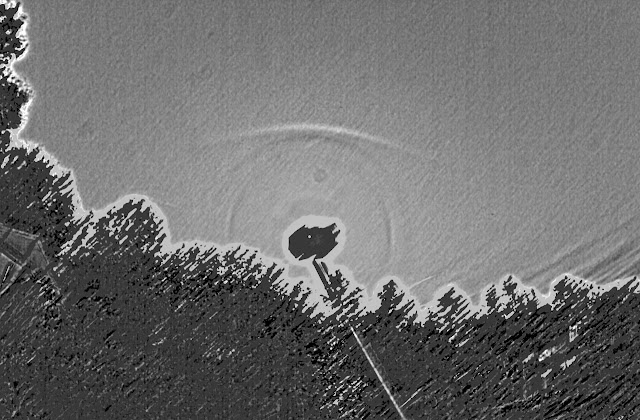 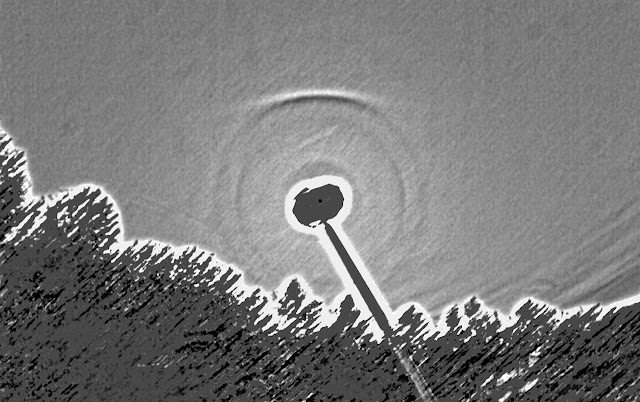 The all-sky display of 30th May 2017 at Pskov Oblast, Russia

The first part of this display occurred between 6-50 and 8-30 hours. During this period only the 22 halo (which accompanied by other common halos in stacks) were seen in this part of the sky. However, at the end of this period a wonderful cloud crossed the sun. This cloud gave a complex of rare halos from Parry and Lowitz orientations - on the stack I found the sharp and bright upper suncave Parry arc together with the upper Lowitz arc. I saw a part of the middle Lowitz arc, which was below the right parhelion, with the naked eye (1).

Thereafter, cirrus clouds cleared, and in satellite images no high-level clouds were visible, so I went to a bicycle training although the meteogram would predict the arrival of a new portion of cirrus in the coming hours. If I had looked at sat24.com during my training, I could have seen that the air ahead of a low-pressure system after passing the Baltic sea, created fresh cirrus clouds above Estonia!

At 15-40 I found that far cirrus clouds which were visible for the last hour at the horizon, now reached the sun. At this moment I saw a colourful lower tangent arc. It was only 5 km to my house , so I accelerated in order to be in time to photograph it. However, a few minutes later I saw a large scale complex in the sky - above the sun there also appeared an upper tangent arc, both parhelia, and a full parhelic circle! The last few kilometers I rode as fast as I could. Luckily, I not too late!

Visually, it seemed to me that the bright parhelic circle contained a red fringe, which also surrounded a diffuse 120 parhelion. Blue minus red versions of some stacks clearly show this diffraction effect (2).  The cirrus clouds were beautiful, they contained not only a smooth veil, but also sharp textures like virga. What they are fresh was seen with the naked eye.

After half an hour, the bright parhelic circle disappeared, when clouds which produced it, drifted to the south-east direction. The upper tangent arc then started to get brighter. At this time I also saw visually both the infralateral arc and the 46 halo above the sun from the 11-00 to 01-00 positions. The complex became less bright after one hour, but at the same time, fragments of a distant parhelic circle was still visible.

Thereafter, I could see only a split upper tangent arc. With the naked eye I could not understand what it is - a Parry arc or a 23 plate arc. The stack taken during this period showed an excellent odd-radius plate complex!