About an hour before midday a layer of cirrus stratus clouds began moving toward the sun and I looked up and saw a colorful 22d halo and I noticed it looked doubled all the way around and looking close to the sun I saw weak 9d halo. I grabbed my camera and then it got spectacular. The 24d halo not only was bright it was sharp and complete and was my best yet to date. While taking picture after picture I saw a segment of a larger halo appear and it turned out the be 35d halo. As the clouds moved thru it peaked with a total of 5 rings the 9,20,22,24, and 35d halos and the 35d halo I got today was my best to date. This could be my best pyramidal display to date but who knows I could get better some day. 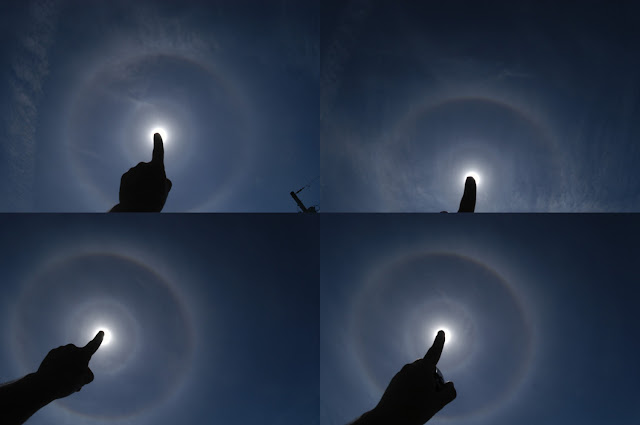 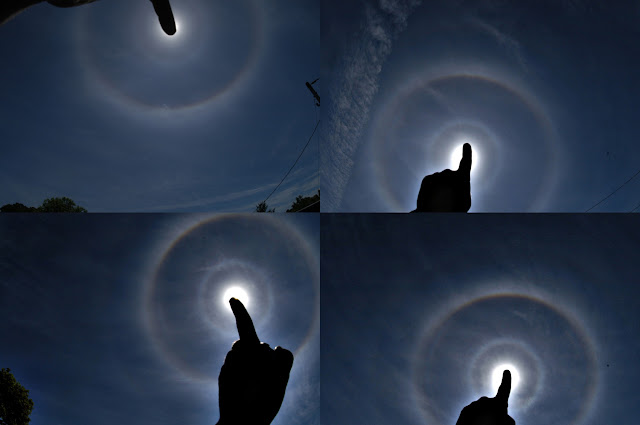 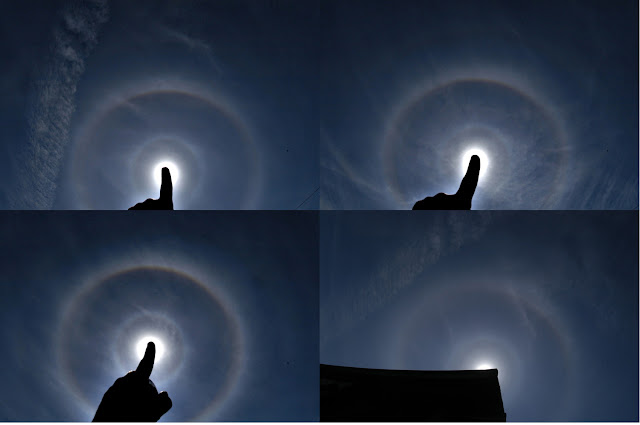 In this post I want to share some of my observations from last month, which I made in St Petersburg (from 15th April to 5th May) and in Pskov Oblast (from 7th May to present time). In total there were eleven displays, six of them comprising pyramidal halo forms. Many of these pyramidal displays were minor, so I will not present them.

The photo on left shows a purely odd-radius plate complex. There are only the upper 23 plate arc with its 23 halo and a couple of 18 plate arcs. On the photo on right you can see fragments of weak odd radius circular halos. Together with the broad 22 halo at the 02-00 position there is the 20 halo and also the diffuse 35 halo. 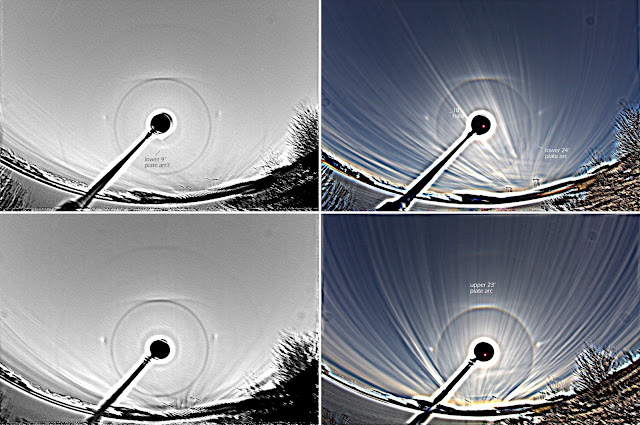 Together with classic halo forms in stacks pyramidal halos appeared with odd-radius plate arcs. On photos above you can see lower 24 plate arcs with the 24 halo and the 9 halo (with possible the lower 9 plate arc). The weak and diffuse upper 23 plate arc is also available. 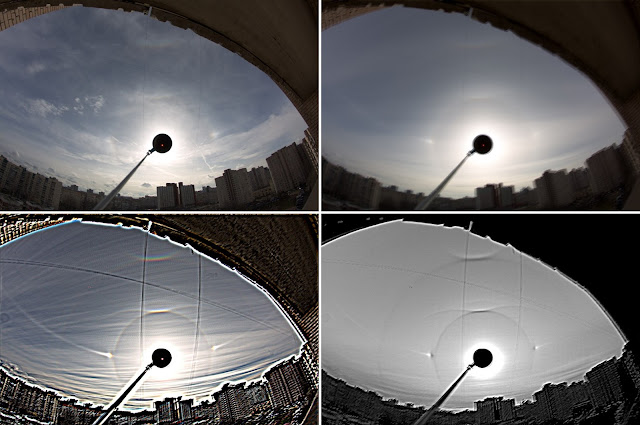 In the morning there was a short display which lasted less than one hour. The display was not predicted by the meteogram, so maybe I missed most of the display, which was earlier that morning. In any case I saw bright parhelia with the colourful circumzenithal arc, and got in the stack the strong parhelic circle and the upper suncave Parry arc together with the nice upper tangent arc. I think it is the Parry arc, and not an upper 23 plate arc, because the display does not contain no other pyramidal halo forms, and the arc looks pretty sharp.

In the morning I observed the large and bright upper tangent arc for around one hour. Infralateral arcs were easily seen with naked eye. Together with bright parhelia I saw fragments of a parhelic circle. In stacks the rare Wegener arc was found.

On that day there was a protracted display, that lasted between six and sixteen hours. But my camera had recorded interesting halos only at the start, on the sunrise. It was an odd-radius circular complex which contained pyramid halos with radii 9, 18, 24 and 35 degrees. It seems the 24 halo included rudimentary upper and lower 24 plate arcs.

No rare halos on that morning but I saw the supralateral arc visually very well, that happens not often. A curious circumzenithal arc appeared a little later. The CZA was diffuse, that is not typical for this halo.
Posted by Nikita Kulanov at 10:11 No comments:

Following recent comments by one of our readers, Aysun Ülger, on the post regarding the earliest known photograph of a halo, I thought it would be useful to post an update in order to make a permanent record of the images he has been kind enough to share with us.

First, from the book "Manual of Meteorology" by Sir Napier Shaw dated 1926, we have two images of halos. The one on the left taken in Aberdeen, Scotland by G. A. Clarke and is dated 30th September 1910, and the one on the right taken in Potsdam, Germany by A. Sprung is dated 13th March 1902. This is now the earliest photograph of a halo we have. 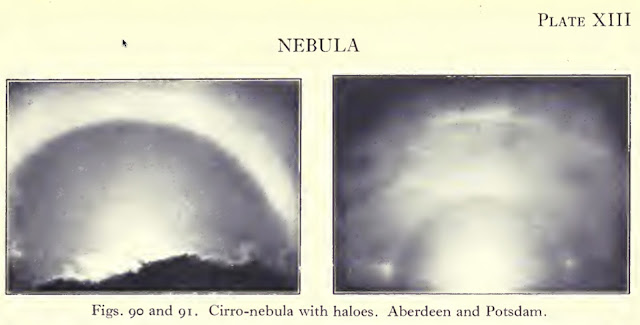 Second, whilst not an actual photograph of a halo, I also thought it would be useful to reproduce an illustration which was included in the book "The Voyage of the 'Discovery'" by Captain Robert F. Scott dated 1905 giving an account of his Antarctic expedition between 1901 and 1904. 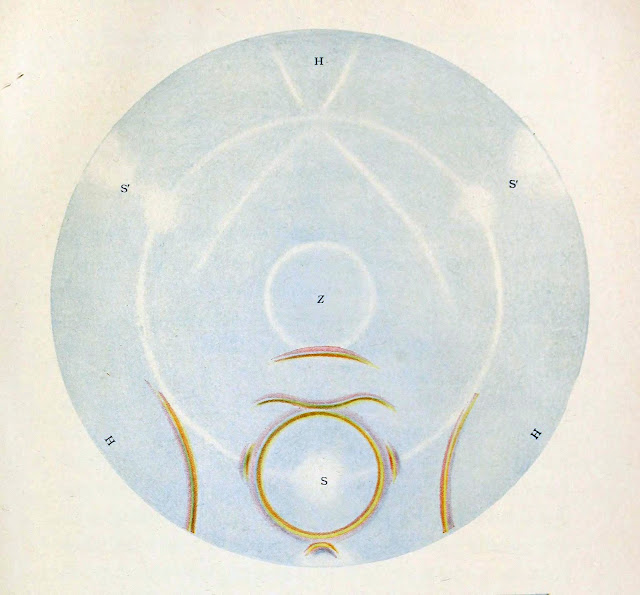 To my mind, this illustration has a very modern look to it, as if it could have been drawn from a photograph taken with a modern all sky lens. If only they had such equipment back then! I also like the way the artist has differentiated the coloured and white halos. What is of great interest is that it has one of the earliest depictions of the Kern arc that we know about. It is interesting to read Scott's own account of the display and it is worth quoting in full,

"November 29 - Shortly after four o'clock to-day we observed the most striking atmospheric phenomenon we have yet seen in these regions. We were enveloped in a light, thin stratus cloud of small ice-crystals; it could not have extended to any height, as the sun was only lightly veiled. From these drifting crystals above, the sun's rays were reflected in such an extraordinary manner that the whole arch of the heavens was traced with circles and lines of brilliant prismatic or white light. The coloured circles of a bright double halo were touched or intersected by one which ran about us parallel to the horizon; above this, again, a gorgeous prismatic ring encircled the zenith; away from the sun was a white fogbow, with two bright mock suns where it intersected the horizon circle. The whole effect was almost bewildering, and its beauty is far beyond the descriptive powers of my sledging pencil. We have often seen double halos, fog-bows, mock suns, and even indications of other circles, but we have never been privileged to witness a display that approaches in splendour that of to-day. We stopped, whilst Wilson took notes of the artistic composition, and I altitudes and bearings of the various light effects. If it is robbed of some of the beauties of a milder climate, our region has certainly pictures of its own to display.

On our return to the ship I could find no account, in such reference books as we had, of anything to equal this scene, nor have I since heard of its having been witnessed elsewhere. The accompanying drawing shows more clearly than I can describe what we actually saw; our artist has shown it diagrammatically, and the observer is supposed to be looking straight upwards towards the zenith." (The Voyage of the 'Discovery', Captain Robert F. Scott, pp 35-36).

So then, the bar is now set at 13th March 1902. This is a mere 76 years after the birth of photography. With a little more effort I am sure we can push this date back into the nineteenth century and even further. As Aysun commented, "Let's keep going"!
Posted by Alec Jones at 15:06 5 comments: 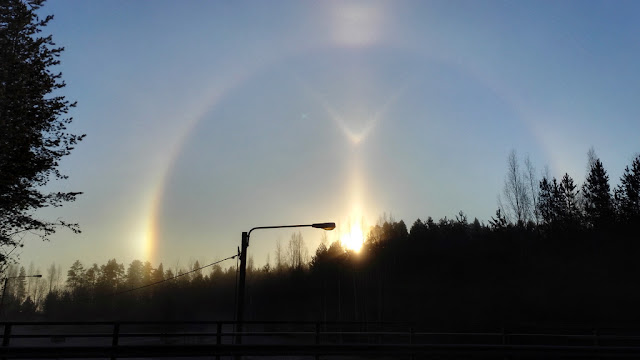 Cold spring has kept diamond dust popping up late. On 28 April a display with sharp Moilanen arc was seen in Järvenpää of southern Finland and could be the latest one on our records. For certain, nothing nearly this good has been seen this far into the spring. Two people sent photos to Taivaanvahti site. The image above was taken by Jarkko Lakso at 6:14 local time and another image was snapped at 6:55 by Emmi Mäkinen.

The cold air mass seems to be in no hurry going anywhere and is forecasted to even tighten its grip at the end of the week. So who knows we are in for more diamond dust surprises at the summer's door.
Posted by Marko Riikonen at 14:43 2 comments: