In the afternoon of 26 March, 2017, I was spending time outdoors with my family and wasn't too well equipped for serious observing. Of course, I had paid some attention to cirrostratus clouds drifting in the sky, but most of the time I struggled to see any significant halos. There were just occasional patches of 22° halo: or at least that's what I thought they were. But then the upper suncave Parry arc appeared so I had no choice but to start photographing immediately. After all, you don't get Parry every week, and in fact this was my first such encounter in 2017. During the next 20 minutes or so, I took a decent set of photos, but then gave up as it appeared that the display had become insignificant again. 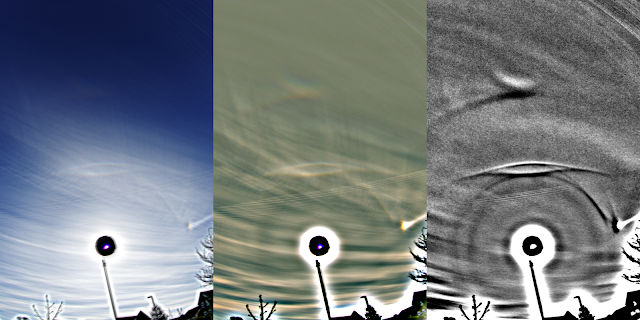 My hope was to find a few more halos in the post-processing, and stacking did a good job indeed. The stack shown above is from the first 50 frames and covers a total of 196 seconds. On the left the unsharp mask is applied on individual frames before stacking. The version in the middle is a gradient-subtracted average stack, which is further processed by using the blue-minus-red subtraction technique on the right. In addition to the usual stuff and the Parry arc, we can identify upper and middle Lowitz arcs as well as a short piece of helic arc to the left from the circumzenith arc. But that's not all - there are also odd radius circular halos.


For comparison, the stack below is from the last set of 30 frames that I took more than 30 minutes after the last signs of the Parry arc had disappeared. This stack covers a total of 174 seconds. I didn't really expect to find anything special at this point, but took the photos anyway out of curiosity. Apparently the odd radius stuff is still in play. My feeling is that it had been there all the time, possibly long before I noticed the Parry for the first time and also long after I had got indoors to celebrate the Mother's day dinner. 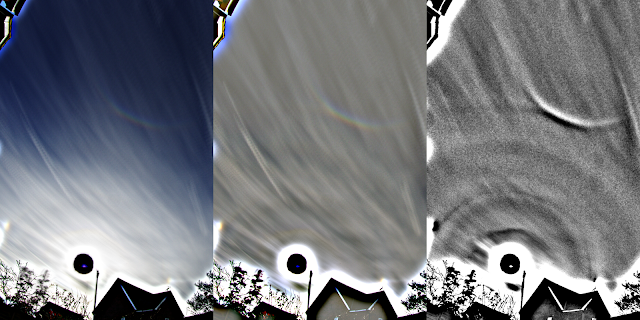 What is shown below is an attempt to make the scene as clear as possible by combining photos from two different series into one stack. 100 frames are included, covering 13 minutes in time but missing about six minutes in the middle. My interpretation is that the relatively typical pattern of 9°, 18°, 24°, and 35° halos is complemented by the exotic 13° halo. But I'm not sure and it would be great to hear what readers might think of the case. Whether the 20° halo is missing altogether or masked behind the suspiciously wide 18° halo, I am not sure of that either. 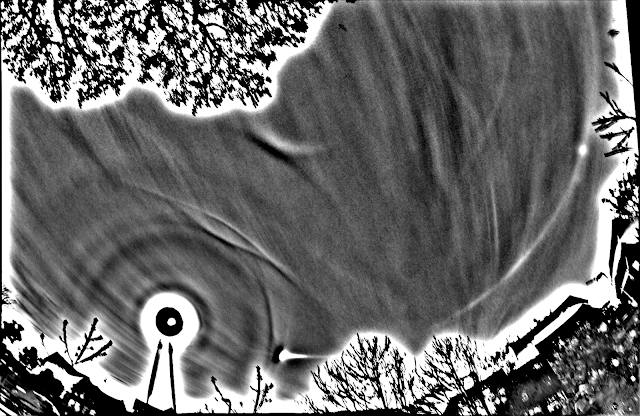