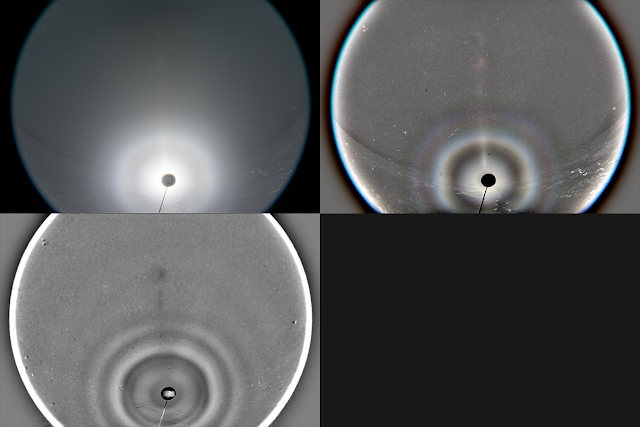 These photos were taken on the night of 9/10 February. In the image above we see odd radius stuff in the beam: circular halos and some bulges on them indicative of poorly plate oriented pyramids. The arc straight above the lamp on the broad 22° halo should be Parry / upper tangent arc rather than upper 20° plate arc. Visually I could not see the odd radii stuff but the appearance of the glitter made me think for its possibility.

One additional reason to suspect odd radii was the lunar display, which did not seem like your basic 22° halo stuff. The shot below was taken soon after I turned off the spotlight and it indeed has some not so clear odd radii, partly because of the artefacts. I photographed lunar also before the spotlight, and then the stuff was even poorer (this photo is not shown). So the spotlight in between gave the best display, which is of course what one expects

The enhanced version of this photo really brings out the artefacts. Br fouled it so completely that I am not showing it. Up until now I had had this nuisance entering the scene only in raw sun shine, but now it is has expanded its range to moon lit nights.

On the brighter side the artefacts became less disturbing when the milky background started clearing as shown by the photo below. Yet even then the br gives a rather ugly result. 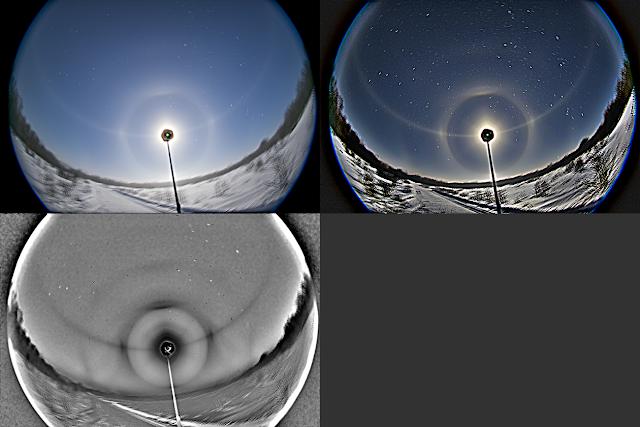