In this post, I'm including the most interesting displays observed during the last month.

On that day, halos appeared in the morning in separate cirrus clouds. Their arrival was not predicted by the meteogram. When I looked out from the window, I saw a bright CZA, but when I came down, it had disappeared. Nevertheless, I could see the weak supralateral arc. Half an hour later, I also saw a nice infralateral arc, when the cirrus cloud reached the horizon.

In the evening bright parhelion was detected, and then a little while later also the wide circumzenithal arc. The halos were produced by the anvil of a convection cell. 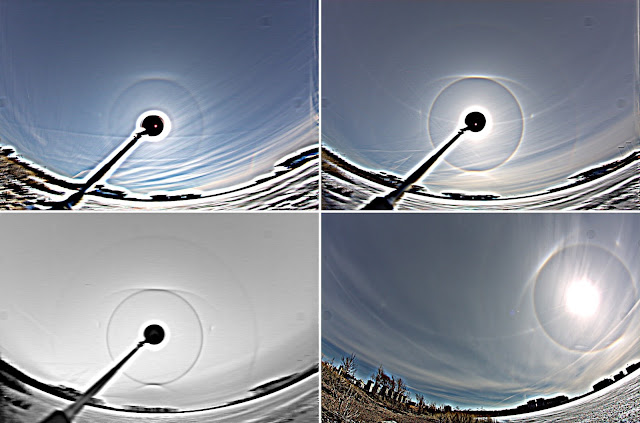 In the morning, at 10-00, the sky was clear. But in the south-west direction, low over the horizon a lot of cirrus clouds were visible. Their arrival was extended for an hour and a half. When a border of a front of cirrus clouds started to arrive, I noticed that it was weak and almost transparent. When these weak clouds reached the sun, at first I did not notice any halos. But soon, some markers of sub-visual odd radius display appeared.

It was broad and undefined halo in 22° area, with pretty obvious upper 23° plate arc in some moments. In the reflection of my sunglasses these things were visible a lot better. These weak odd radius halos were visible for around a half of hour, or even more while the area of weak cirrus crossed the sun.

Then, on the right-hand side pretty bright 22° halo started to appear. It was the arrival of main part of cirrus. In that area clouds were common and solid. After few minutes both bright tangent arcs appeared. Lower tangent arc was brighter than upper. I also noticed big infralateral arc on the right-hand side. It was pretty weak, but well coloured. I could see the arc better when I used peripheral vision.

This peak of the display was rather lengthy, and during its course I also watched both 120° parhelia, parhelic circle (it was easily seen within 22° ring), and the top part of 46° halo (likely it was the combination of supralateral arc and 46 halo. Although both were weak, together they became visually visible).
The peak was interrupted when middle-level cloud started to arrive. Then I saw a couple times only bright 22° halo

The display looked quite ordinary, so I was glad I detected pyramidal halos such as upper 23° plate arc and 9° column arc. 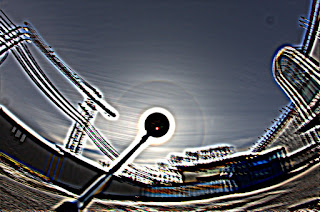 It was the weak display, which lasted most of the day. There was no suspicion that there may be pyramidal halos. But still I got upper 23° plate, 18° plate arc and 9° halo in the stacks.
Posted by Nikita Kulanov at 20:04