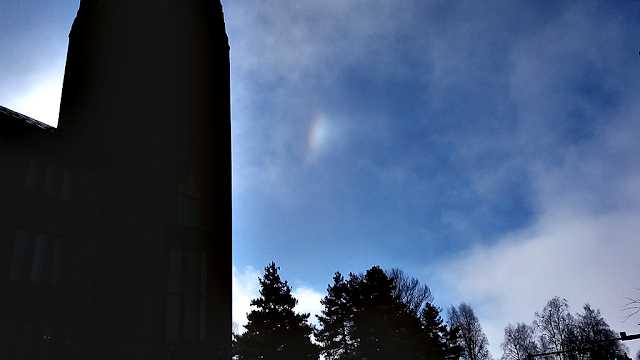 Melt waters draining into sewers and flies warming up on the building walls. You wouldn't expect diamond dust on an such early spring day, but that's just what happened on 6. April in the south-eastern Finnish city of Joensuu.

As I came out from Sokos department store where I went to buy herring (which they didn't have), I was surprised to see ice crystals glittering against the town hall building and ground, making a vague spread out subsun on front of me. For a second I thought of the possibility of tree twigs shedding off their snow (a couple of years ago a guy stacked subsun formed that way) but it did't feel right because for one thing there was no more snow on trees. So I looked up and saw in the sun direction myriads of crystals speeding past in the light wind. This was true diamond dust: the fog that had settled previous day at the darkfall over Joensuu was now clearing up and trying to turn into ice.

Next my eye caught parhelia. They were visible intermittently for 25 minutes until the fog evaporated away. I tried to see cza but could not spot it. Sun elevation during the observation rose from 29 to 30.5 degrees, which is near the end of cza visibility range at 32 degrees. If the crystals were optically below par, as seemed to be the case judging from the rather tame appearance of parhelia, that may explain the absence of cza at such an unoptimal sun elevation. 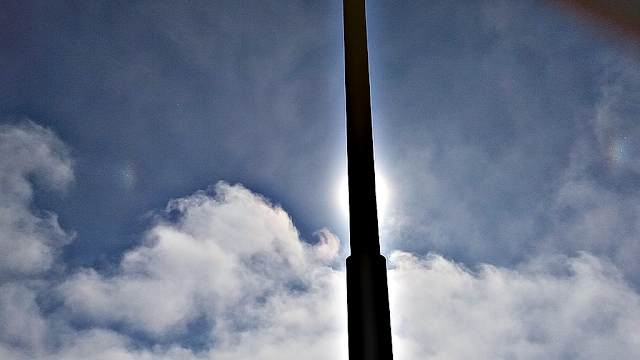 I don't carry thermometer, but at the official weather station some 1.5 km away temperature changed from -0.2 to -0.3° C (31.6 to 31.5° F) during the time parhelia were seen between 10:55 and 11:15. Joensuu is flat over large areas and I wouldn't expect much temperature differences between my location by the river and the weather station, particularly in fog situation where temperatures should be evened out. If anything, where I was it should have been warmer, because I could see that the station direction was fully enshrouded in fog whereas I was at a transitional area between total fog to the south and completely clear blue sky to the north and thus air must have been warmed up slightly by the sun. By 11:30 it had cleared all around and the temperature at the station was already +1.3 C, thus testifying on the warming effect of sun.

A vertical temperature profile would of course have been interesting as the mass of the crystals seemed to form a bit above the ground. Possibly it was a bit colder up above. On the other hand, the ceiling of the fog has been all the time in full sun shine, so it is hard to say. Maybe a someone versed in meteorology would have an insight on this.

An earlier halo observation near melting point is that by Jarmo Moilanen in Oulu on 3. November 2013. He saw parhelia, subsun and subparhelia at -0.4 to -0.6° C (31.3 to 30.9° F), but by the time Moilanen got camera ready the display had already faded and there was only subsun visible.