Map in the sky 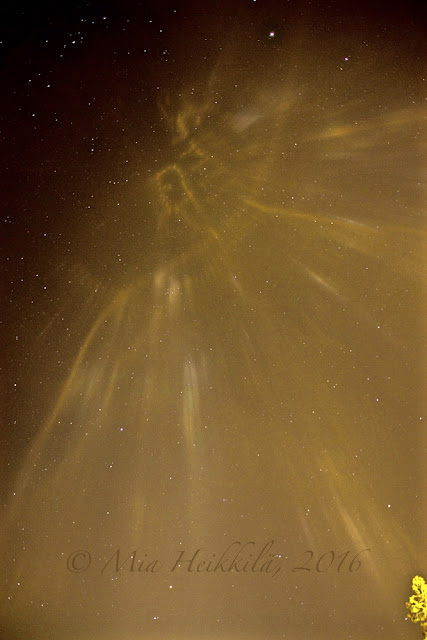 January 12th 2016 Mia Heikkilä noticed some peculiar light formations high in the night sky of Eura, Finland. She took some photos of the phenomenon. Camera revealed that formations consisted of spots and lines. She posted the pictures in Taivaanvahti where the phenomenon was recognized as an array of light pillars from street lights mirroring a network of streets. There have been some previous cases where streets and even their side streets have been recognizable from high floating pillars, but this is incomparable what comes to complexity of the "map". 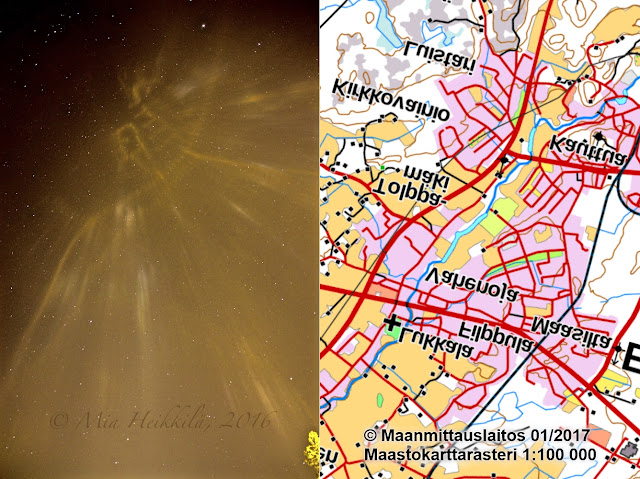 In the second picture, there is a comparison between the "celestial" and "terrestrial" map (latter being mirrored for easier comparison). One can conclude, that zenith is in the uppermost part of the picture. There the pillars are seen directly from below, making them appear as dots. Away from zenith region, pillars are seen ever longer, as viewing angle increases. Also, one can notice, that parts of the farther streets "circling" the observing place are represented by pillars side by side forming a dotted line, whereas streets that are "radiating" from viewing location are represented by overlapping pillars fused together to a continuous line.
Another conclusion from the geometry of the pillars is that the light source isn't streetlights directly, but their light circles on the ground. It's quite amazing, that a divergent reflection from divergent light source can still produce pillars high in the sky.

But how high were the pillars? Several persons did independently calculations to find that out. Conveniently, there is a star field photo integrated in the picture for getting angular references. Measures of "terrestrial" counterparts of halo formations could be taken from topographical map. Results didn't deviate much from each other, averaging in 2,1 kilometers for crystal layer height. One calculation was also made to find out the thickness of the crystal layer and it resulted about 200 meters. Atmospheric sounding data later that night from Jokioinen (about 80 km from Eura) showed a sharp inversion layer just over 2 km. That's well in line with calculations.

One of the most common halo forms but how the display is presented - far from common!
Posted by Tero Sipinen at 18:16