Halos and fogbow in the same mix 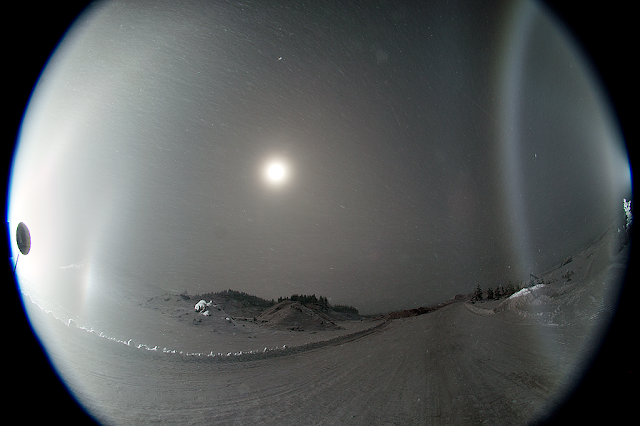 To photograph a fogbow simultaneously with halos one's best bet may be the foggy autumn mornings with high clouds in the sky. (I leave the possibility of an exhalation fogbow unmentioned).

That should be easy enough. However, connoisseurs might demand the criteria to be that both phenomena must appear in the same cloud. That's making the task a good deal harder. Below freezing temps fogs sometimes have a meager few crystals thrown in the mix and there may be a pillar visible together with fogbow, but anything resembling a proper display is highly uncommon in my experience.

Actually I have never seen one - not until the night of 12/13 December 2016. On that night I was photographing halos at Jokkavaara gravel pits east of Rovaniemi at around -27°C. After the display took a worse turn I went for a little ride to see how things looked a kilometer or so in the city direction. It was the same crap and I returned to the gravel pits.

What a surprise it was to see the place now enshrouded in thick fog. Having just reconnoitered the surroundings I believed diamond dust was right behind the corner, and with the wind being towards the gravel pits, I wondered if the fog might soon start freezing.

True enough, crystals started glittering among the matte fog droplets and it didn't take long to have passable parhelia in the spotlight beam together with fogbow. The more halos intensified the fainter the fogbow became as diamond dust ate away on the water droplets.

It would certainly have been a splendid display if the process had gone all the way. Water cloud born displays tend to be violent. But the fog got an upper hand and situation was reversed to where it started from: only fogbow in the beam and no crystals, no halos.

So this was a uniform mix of fog droplets and ice crystals. More common are situations where wafts of pure diamond dust and pure fog are alternating in the slight breeze. If you are taking, say, 30 second exposures, an illusion of fogbow being visible at the same time with halos can be created in the image when they in reality occurred at separate times.

Now what if only a display from photons of sun would satisfy the connoisseur? That's really amping up the challenge. There do exist some reports of simultaneous halos and fogbows from polar explorers more than century back, at least from Henryk Arctowki. The only photographs may be those by Ed Stockard in the Greenland Summit Station. But it is not certain if in this case the stuff occurred as one mix or the crystals and fog droplets were as separate layers.
Posted by Marko Riikonen at 07:51