A Rovaniemi display and simulation

This display shows the very common arcs that according to simulations seem to arise from 3b5 type raypaths in Lowitz oriented crystals (where b signifies basal face). I avoid using any names, first because I am uncomfortable with current nomenclature and second, because the situation with these kind of arcs has become confusing. I am getting to have a feeling that there may be two or even three different halos that look quite similar but have different formation.

The match between photo and full simulation on the left is poor. Neither the curvature nor intensity of the simulated 3b5 arcs match with those seen in the photo. The inner arc is curving less steeply in the photo as compared to simulation. And it is most intense near 22° halo while in simulation the arcs barely reach to touch it. I found not possible to make the arcs extend all the way to parhelia in simulation. The filtered simulation on the right shows the maximum extent of the arcs.

Concerning the shape mismatch, it is also noteworthy that the arcs in the photo are separate from 22° halo while the simulated arcs reach to touch it. Added to the right side filtered simulation is circular Lowitz arc to see if that together with the 3b5 arcs could explain what is seen in the photo. The shapes don't quite align. It seems to me there are no Lowitz arcs in this display.

The simulation light source elevation is -32.3 degrees. Concerning the crystal parameters, the parameter table below is not the version that was used to make the simulation on the right, I didn't happen to save the last permutation. But it is close enough. There is a plenty of leeway for 3b5 arcs parameters so exact numbers are not important.

The image is an average of fourteen successive 30s exposures, stacking done with Halostack. The night was 10/11 February. I was a bit late from the show because I was keeping an eye too long at the lowering of the cloud base from my apartment, suddenly realizing when the chimney of the distant power plant disappeared that I have to be going and quick. It was full fog when I curved to the scene on the ski slopes side of Ounasvaara and streetlamp parhelia were awesome solid beams. Obviously, my procrastination at the apartment asks for at least 15 minutes of unremitting self-criticism at the next halo meeting. Typically if it is like that when you arrive, then it is already late when you are ready to photograph. Sure enough, by the time I had it all set up, snow flakes were already falling among the diamond dust just as forecasted. But because the fog was still there the diamond dust was able to hold on to it for enough long to me to secure series of photos at several lamp elevations. Of course the rather ample snowfall (which was actually boosted by the diamond dust to even more) greatly reduced contrast, giving a milky background. Considering these far-from-optimal conditions, the display was surprisingly good. 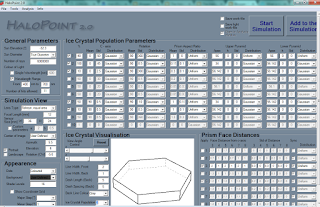