Two observations of the Kern arc in cirrus 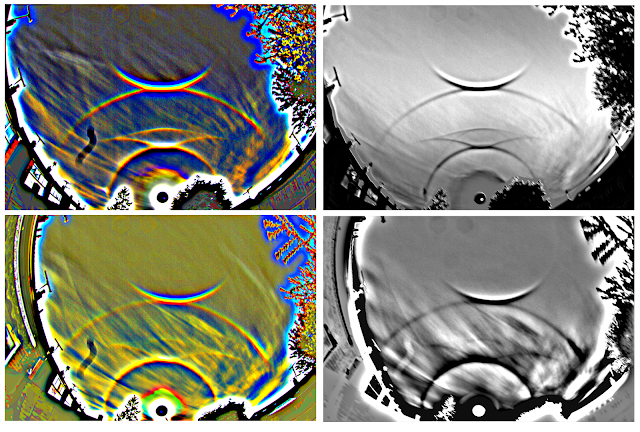 As was mentioned in the comment section of Riikonen's report of the recent case of Kern arc in arctic diamond-dust, I was lucky enough to catch the mythical arc twice in 2015 at my location in Berkshire, UK. In both cases the Kern arc was extremely faint and could only be uncovered after applying the colour subtraction technique on stacked photos, each based on 20-40 DSLR frames and spanning approximately five minutes in time. Remarkably, in both displays the Kern arc appears in two stacks separated by 10-15 minutes. The display of 20th April is shown above, while the collage below represents the display of 16th June. Each collection contains the colour-subtracted versions on the right-hand-side (processing in the bottom right panel for the April case is by Nicholas Lefaudeux). Left-hand-side panels are with enhanced colour saturation. More photos, including a couple of single frames and other stages of the displays, are available for viewing at the Finnish site at http://www.taivaanvahti.fi/observations/show/37300 for the April case and at
http://www.taivaanvahti.fi/observations/show/38958 for the June case. 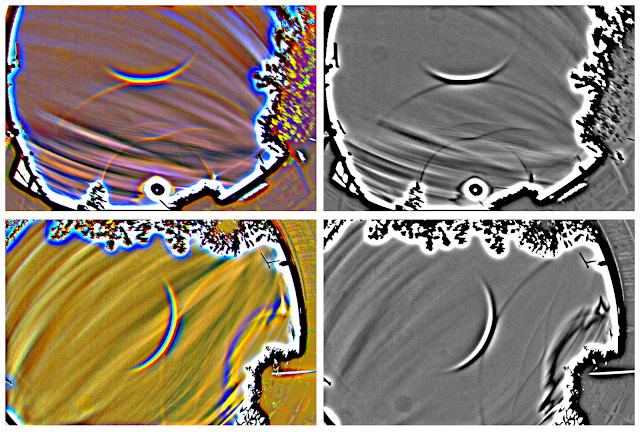 In overall terms, the two displays are almost identical. Apart from the Kern arc, there is little to suggest particularly strong presence of oriented plate crystals. Of course, parhelia and circumzenith arc (CZA) stand out in the processed stacks, but in single frames they don't appear too extraordinary. Furthermore, part of the CZA intensity obviously comes from Parry-oriented crystals, which are not thought to contribute to the Kern arc. Even without the Kern arc, the displays would be rather extraordinary in my opinion, thanks to the presence of Tape and helic arcs, neither one often seen in cirrus displays. The June display takes this aspect even further by additionally containing the Hastings arc. Other halos present in the displays include the common ones produced by random, column, and Lowitz orientations.

There appears to be some common thinking that the Kern arc benefits from very low solar elevation. Against that background, the solar elevations in question here seem high (16°-19° in the April case, 18°-21° in June). Had the Sun been a few degrees lower in the sky, the distance of the Kern arc from other halos of interest and from the Sun had been too much for me to catch it in the first place, as I was not specifically searching for it and my personal toolkit does not contain an all-sky lens. But after all, I am not so convinced that the solar elevation makes such a big difference, except possibly when it comes to judging the likelihood of Kern from the intensity of CZA. To illustrate the effect, I produced a set of simulations using the Halopoint software and assuming oriented plate crystals with varying aspect ratios and base shapes. The results are combined in the figure below (each panel contains solar elevations 5°, 15°, 20°, and 25°). With regular hexagons (panels on the top) I get no Kern at all. With regular triangles (bottom panels), I get a decent Kern regardless of the solar elevation, unless the crystals are very thin. Intermediate crystals in the middle row make a decent Kern only if they are thick. In none of the cases does the lowest elevation show the most intense Kern - I'd rather say the opposite is true. 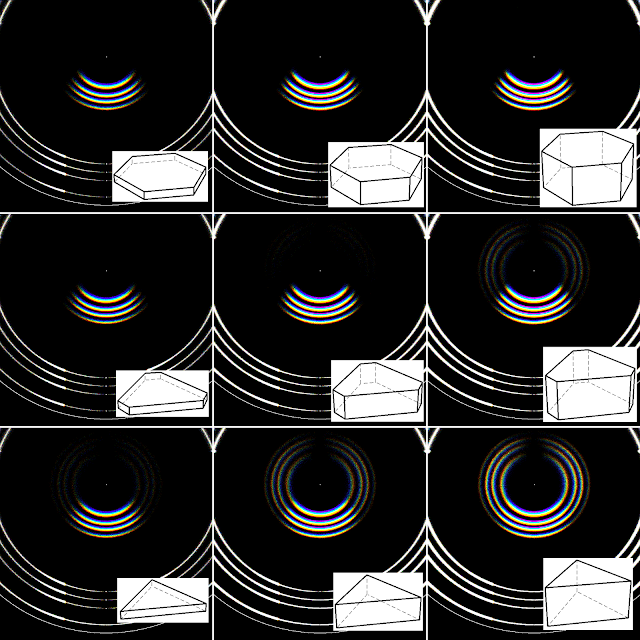