The Austro-Hungarian North Pole Expedition and the Fake Sun


The 1 May 1875 issue of the Illustrirte Zeitung appeared with an exotic image showing a halo effect not much talked about. There seem to be two suns in the sky directly above each other. This could be the fake sun, or double sun effect, which is actually part of a sun pillar and can be observed when ice crystals are precipitating from the virga of Stratocumulus or Altocumulus clouds. The real Sun is covered by the edge of the cloud and the deceptive fake sun can be observed just above or below it on the icy virga. The phenomenon can easily fool a naïve observer, as this brightening looks very much like the real Sun. 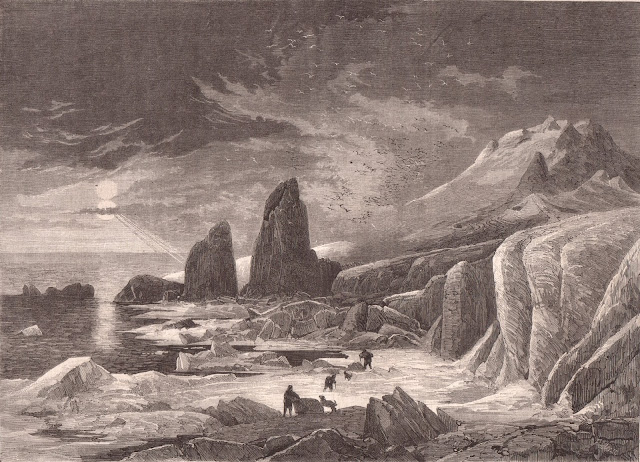 In the second half of the 19th century, there was growing interest in exploring the Arctic regions, with expeditions launched almost every year. The Austro-Hungarian Monarchy also wanted to have its share in the discoveries, and by 1872 Austrian and Hungarian aristocracy had donated enough money for the journey. The expedition was led by Captain Karl Weyprecht and Julius von Payer, and their chief aim was to find the north-east passage along Siberia to the Bering Strait. The crew of the 40-meter long schooner Tegetthoff was recruited from all over the Monarchy.

Just after a month, however, the sailing vessel got entrapped in pack ice, and started drifting up north. It never reached its goal, remained ice-locked for the rest of the expedition. The crew spent almost two years north of Novaya Zemlja living mostly on the meat of polar bears (they killed 67 altogether). Many of them got ill and one person even died, Tegetthoff tipped to one side, and finally in May 1874 the crew decided to abandon the ship. It took them three months to reach the open sea with dog sledges and boats, where finally Russian fishing boats rescued the people and took them to the Norwegian Vardobe.

During their entrapment, however, Payer’s team had made significant expeditions, the most important of which being the discovery of the archipelago Franz-Joseph Land, named after the Austro-Hungarian Emperor. Payer organised sledge expeditions to map the area, one of which reached almost 82° North to an island which they named Rudolf Land in honour of the Crown Prince. It was this place where the fake sun effect was observed.

The crew returned to the Monarchy as true celebrities, and accounts of their adventures and scientific achievements soon appeared in contemporary media. The woodcut image shown above is from one year after their arrival. The newspaper Illustrirte Zeitung dedicates more than a whole page to the praise of Payer’s own images and the paintings Adolf Obermüller created on their basis. This very image shows the momentous day when they reached the northernmost point of the expedition. In 1876 Payer himself published his book about the journey titled Die österreichisch-ungarische Nordpol-Expedition in den Jahren 1872-1874. An almost identical image of the fake sun can be found in this opus, but perhaps showing the sun pillar a bit better.

Payer himself did not write much about the fake sun. We only know that during the observation the sky was covered by thick clouds, and a second Sun was visible, though it looked “matter” than the real one. If the woodcut really shows a fake sun, this account might be one of the first documentations of the phenomenon. Marko Riikonen has collected some early observations, the most noteworthy of which is probably that of Giovanni Cassini’s from 1693. On his page, Riikonen also shows images of a 2009 observation by Julie Bronson from South Central Minnesota.
Posted by Ágnes Kiricsi at 21:27