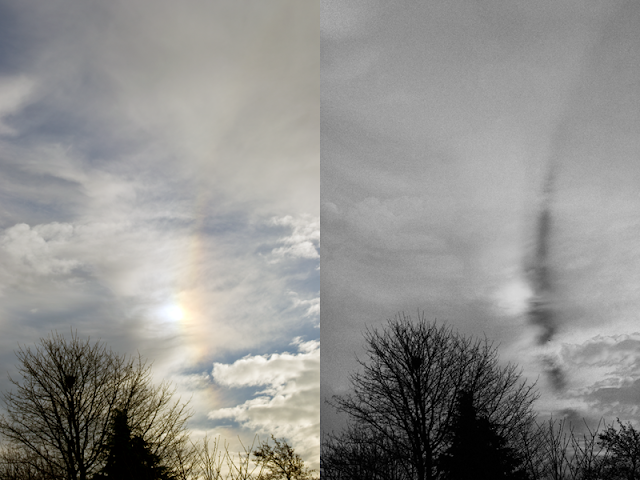 In 2017, halo activity in my part of the United Kingdom has so far been very quiet with not much to get excited about apart from the occasional odd radius lunar halo. However, on the 6th February things improved a little with a nice little display which included 22°, both parhelia (sporting parhelic tails), uta, possible Parry, cza, supralateral and all three Lowitz variants. The upper and lower Lowitz were vestigial, but the middle Lowitz illustrated here was quite clearly defined.


This burst of activity got me ruminating about the frequency of certain types of halos and the nature of “rarity”. Compared to many of you 'old hands', I am a comparative newcomer to halo observation. When I first started to observe, many halos were still considered to be extreme rarities or at least exceptionally infrequent. Others, such as the Kern, were so rare that they were considered to be the Holy Grail of halos, so few were their sightings. What I have noticed over the last few years is that many of these rarities are seemingly becoming far more frequent and in my own mind at least, I have downgraded them from ‘rare’ to ‘infrequent’.

Take the Lowitz arc for example. It is only a few short years ago that its very existence was being doubted, controversial to say the least. First, there were a few sightings, then a trickle of photographic images emerged which confirmed it as a reality. Over the past ten years, their frequency has seemingly increased to the point where I will see several per year and look out for them as a matter of course. Whilst not commonplace, they are certainly hovering somewhere in that vague, nebulous no-man’s land between infrequent and relatively frequent. Likewise, the Kern. At first a mythical creature, but now we are seeing the first drips which will eventually become a trickle….

So what has caused this apparent change in frequency, this downgrading of status? I would like to posit two possible causes: the ubiquity of digital imaging and advances in image processing. It is not that these halos are actually becoming more frequent in reality but that the effect of digital imaging and the development of image processing techniques are revealing them to be present in many more displays than were hitherto thought. In the past, one would take a roll of traditional film, but prior to image processing what did one do with them? Answer, nothing in most cases. You either saw the halo on a particular frame or you didn’t. This resulted in some of these rare halos only showing themselves under exceptional conditions. With the advent of inexpensive digital cameras and image processing software we saw far more phenomena being recorded. However, it is only with the introduction of the B-R processing technique pioneered by Nicolas Rossetto and perfected by Nicolas Lefaudeux and to a lesser extent image stacking, do we really notice an apparent increase in all types of rare halos. These techniques alone have been responsible for the massive increase of rare halo frequency and the identification of several new halo species. We have now reached a point where what was new and exciting yesterday, is passé today.

I think this trend is going to continue as more and more observers embrace these new methods of working. We have already seen it occur in the wider field of atmospheric optics where photographic identification of higher order rainbows, especially the third and fourth orders, are now becoming a reality. One might argue where is the hard evidence to prove this is anything but a theory or personal opinion? This evidence is indeed hard to come by, however projects such as Lefaudeux's 'HaloCam' has demonstrated without a shadow of a doubt that certain halos are far more frequent than previously thought. For example, he has very clearly demonstrated that the 46° halo is present almost as often as the 22°, whereas at one time it was considered to be a very infrequent visitor to the skies. So not only will this trend continue, I think it will also accelerate, especially in the field of spotlight displays where new halos are being discovered on a very regular basis. Even in daylight displays, new halos are still being captured from time to time using these techniques.

A few years ago, it seemed like everything that could be seen had been seen. We are now on the cusp of a new era of halo research. Today may indeed be considered passé by some, but tomorrow is definitely going to be tremendously exciting! I want to be a part of that new wave of discovery.