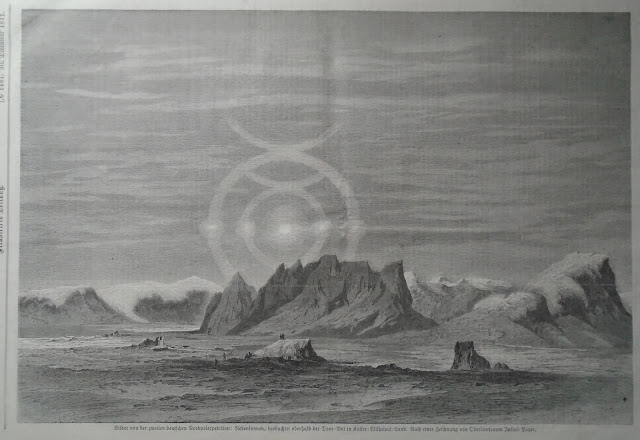 The etching shown above is based on the drawing of Austrian mountaineer, cartographer and landscape artist, Julius von Payer, and was published in the 30 December 1871 issue of Illustrirte Zeitung. The halo phenomenon was sketched in Dove Bay in the region previously known as King William’s Land, the northernmost area the Second German North Polar Expedition reached.


In the mid-19th century, German ambitions to explore to North Polar region resulted in two expeditions. The first, in 1868, got as far as latitude 81°5' near Spitsbergen, but could not reach its planned destination and yielded no significant scientific achievement. The second one was a more extensive journey and aimed at getting to know the central Arctic regions with a planned wintering in the hitherto unexplored northeastern Greenland.


It was on 15 June 1869, when the two schooners, Germania and its supply vessel Hansa left Bremerhaven. The captain of Germania was Carl Koldewey, who had already gathered experience in polar journeys during the previous German expedition.  After about a month, the two ships met pack ice and got separated due to misreading the flag signs. Hansa was not fortunate: it was crushed by the ice and sank at latitude 70°32', a few kms from the Greenland coast. Its crew of 13 spent the winter in a coal dust briquette shelter and was finally saved.


Germania, with its crew of 15 men, reached Sabine Island, where the wintering camp was established. In the autumn of 1869 and spring 1870, they made sledge explorations, reaching  the northernmost latitude of 76°30'N. The investigations were led by Payer and the most significant achievement was the discovery of Kaiser Franz Joseph Fjord, named after the Austro-Hungarian emperor, who had contributed to the expedition with significant donations. The return of Germania was adventurous. The engine broke, but finally she defeated pack ice, and managed to return to Bremerhaven on 11 September 1870, mostly by using sail.


The Illustrirte Zeitung article does not comment much on the peculiarities of the display witnessed by the explorers. It explains that parhelia are formed by the reflection of sunlight on ice crystals and then explains that sometimes a double ring and colourful arches may form, and even a horizontal line starting from the Sun (i.e.: the parhelic circle). The article then continues with praising the magnificent colours of the display.