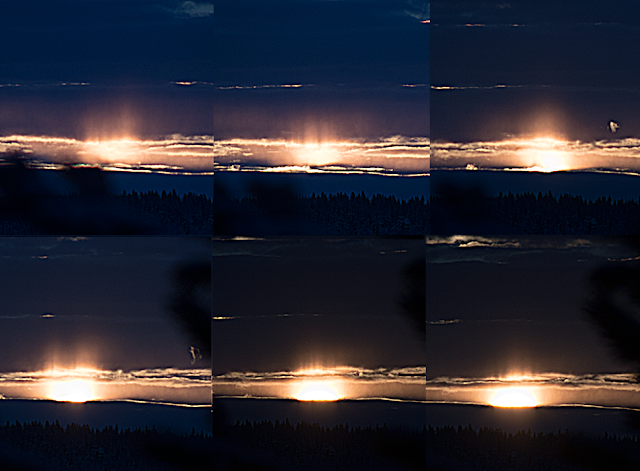 A good proportion of reflection subsuns are sliced and there has been discussions of cloud shadowing as one explanation. Recently I observed a sun pillar that was sliced by cloud shadows (image above). This seemed in my mind to concrete the possibility of clouds as a culprit.

Yet at least one observation don't fit that picture. In April 28, 2015, I saw in Kirkkonummi a reflection subsun which slices remained stable too long to be caused by clouds. Three successive photos of this display are shown below. Clouds move and cloud rays change, but the two faint reflection subsun slivers stay unchanged.

Maybe in some other cases clouds can be the explanation, but in the Kirkkonummi display it clearly can't account for the phenomenon. So I guess we are still, if not in shadows, at least in penumbra with this issue. The sometimes observed displacement of reflections subsuns from the solar vertical is another funny feature.

The original report of the Kirkkonummi display.
Posted by Marko Riikonen at 09:30