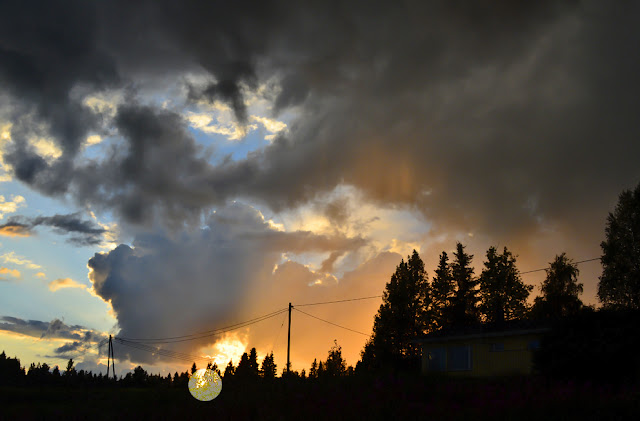 Slices of reflection subsun have appeared a little off-set from the solar vertical at least in one display. The image above, taken by Voitto Pitkänen in Kuusamo, Finland, on 27 June, 2015, shows potential to be another case and with a quite large displacement. A little right from the center of the photo are vertical pillars that bring to mind a sliced and displaced reflection subsun. The location of the sun is marked with a circle at the bottom of the photo.

However, when this observation was submitted to Taivaanvahti and the reflection subsun interpretation was suggested, it was also quickly put in question by Tero Sipinen on the basis of the apparent low altitude of the stuff in which the effect appears. It seemed like ice crystals could not have occurred under those dark clouds in the middle of the summer.

Atmospheric sounding data for that day, checked by Sipinen, gives additional support: freezing point was reached not until 4 km altitude from the ground. The clouds against which the pillars show up, are clearly lower down and thus couldn't have possibly precipitated ice crystals.

So I am wondering, are these just sun lit rain streaks? According to Pitkänen, the clouds are remnants from thunder, so some rain can still be present. Actually, the intense orange twilight in the photo is probably due to falling rain. And in general, we are not used to seeing halos under cumulonimbus clouds.
Posted by Marko Riikonen at 19:21