Thin plates in rotating Parry orientation as an explanation for thedisplay on the night of 8/9 November 2016, in Rovaniemi 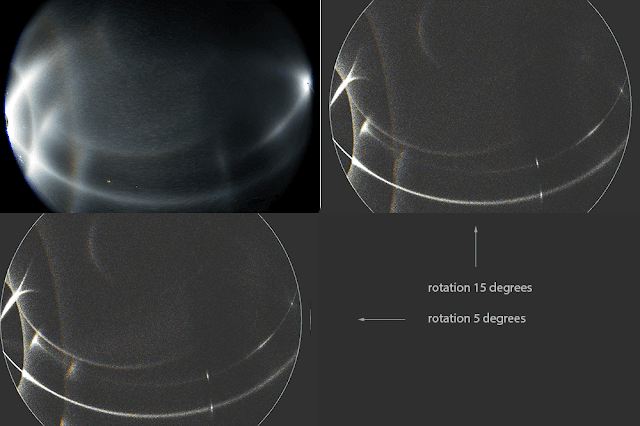 In an earlier post I told simulation attempts were not successful for this display. Well, I really did not put that much effort into it. Now I have given it a fresh look and managed to get some success.

As usual, the simulations do not stand scrutiny of details, but that does not matter regarding main message: that it was necessary to use thin plates in rotating Parry orientation to keep the subhelic arc and anthelic arc stuff in check.

Two simulations are shown above together with the photo. They are identical except that in the other the thin Parry crystals are rotating 15 degrees and in the other 5 degrees. The subhelic arc is actually in there, but it is masked by background noise from the random population. Well, maybe its curve can be detected in the 5 degree simulation, but it is shadowy. It becomes clearer with more burn and finer dot.

The simulation with 5 degree rotation replicates also the diffuse area of light seen above the Wegener arc in the image. It is a spread out helic arc. So maybe we could regard the Wegener rather as an intermediate form between Wegener and Hastings, the “Wegstings”.

If thin plates indeed are the culprit, how can they fall with their basal faces vertical? If we maintain that singular plates can not knife through the air in such orientation, then perhaps there were copious 90 degree crosssed plates in the air, built so that one was glued to the center of the other one’s basal face to provide the right balance for the required orientation. I did not take crystal samples, with one camera it is too much a hassle, particularly as we have again and again come to learn that samples rarely give answers.

Finally, a technical factor could have influenced the subhelic arc visibility in the photo. I had placed the camera slightly outside the center of the beam sideways to enhance the sides of the display and this may have had a dampening effect on the visiblity of the higher located subhelic arc. The effect is probably not significant, the camera offset was just a little, but in the future this practise must be dropped in order to get best comparability with simulations (of course, as the spikes at the anthelic region attest, my beam is not regular anyway, so to some extent this issue is there aways). Off the record, I don’t really think that this could have made subhelic arc disappear, rather the opposite, because when the camera is right in the center of the beam, you have more masking bright glitter than when the camera is offset and any threshold intensity halos should be then lost easier. But it is good to let this issue have known.