On some more aspects of a display observed in Rovaniemi on the night of 9/10 November, 2016

In the previous post of this display I discussed two photos taken towards the end of the hunt, just before twilight. Now it is time to look at the photos taken earlier, from midnight onwards at another location. Please mouse over or click the photos to remove the milky veil that the systems adds as default to them.


Of the several stacks that were photographed, I made simulations of two that are shown below. Unlike the morning photos, now only one stricly oriented Parry population was needed to the explain the display’s halos from c-axis horizontally oriented crystals. So here we have a pure case of uppervex Hastings and nothing reminescent of Wegener.

Except that a little detail strikes a dissonant chord. In the lamp side photo above an arc is touching the bottom of the 22° halo whereas the simulation gives an arc that is separated – the lowervex Parry. Thus the lower arc in the photo is suggestive of tangent arc and column orientation. But everything else – the presence of Tape arcs, the bright helic arc, lack of subhelic or 46° lateral arcs – shouts out loud this is pure Parry. So what is going on?

Well, even though spotlight displays have a highly 2D character, there is divergentness involved and halos may extend more towards the lamp than true 2D halos would. Look for example at the upper Tape arcs in the photo. They are deeply embedded into the 46° halo, although in simulation they are separated. In the photo they even seem to extend slightly inside the 46° halo. And in other displays upper tangent arc always pushes through the 22° halo towards the lamp (it may be a different thing with that halo, though, than with Parry). Even in solar displays various arcs can be glued to their circular rings despite simulations telling they should be separated.

So I would not quite yet scrap the pure Parry character of this display because of that little anomaly at the bottom of 22° halo. It is not the first time to be faced with this matter: we were wondering about it last winter in another potential Hastings case.

As for this lamp side view in general, it seemed not possible to get a satisfying match. For example, with all parameters that I tried, a secondary upper Tape arc (if letters are used to denote it, maybe it should be upper Tape arc B, instead of the Tape arc D that I used in an earlier post) was produced outside the primary. As for the Hastings, in the photo it is brightest near the lamp, then has an intensity drop just inside 46° halo before getting again a bit brighter outside. I could not reproduce this variation. I think there is going on something that is beyond the reach of the simulation software. In the simulation shown was used just one Parry population optimized to make a Hastings that is brightest near the lamp and vanishes outwards. The crystals were thin h/d 0.05 plates. Such a solution did not quite produce matching intensity distribution for the helic arc, and I am certainly not proposing this as final solution. The parameter table for the simulation is not given as I happened not to save it. Because in the photo there is Moilanen arc, I added it to the simulation too. Simulation light source elevation is -5 degrees.

Opposite to the lamp the view is very much Parryish, as shown below. In addition to simulation I have provided also a br version of the image because it makes it easier to distinquish the spikes of lamp artefacts from halos. It seems to show that inside the subanthelic arc there is no diffuse arcs, just artefacts. Another image further below also has the hallmarks of pure Parry. 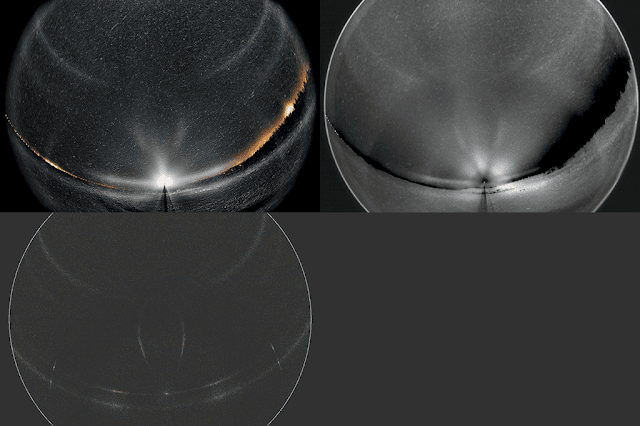 In the sideview image below noteworthy is the very thin core of the sub-120° parhelion. It is as thin as the sun pillar above the Parry arc. In br version this core is better separated from the glow surrounding it. Further below are four other photos from the first part of the night.

Finally, I make a return to the anthelic region photo from second part of the night. Earlier I had shown only br version of the blue spots in Liljequist parhelia, but they come out also in “visible wavelengths”, as demonstrated by the extremely saturated version below. Noteworthy is also the dark area that seems to be confined by the shape of subanthelic arc even though the top of the subanthelic arc is not seen. This was something I raised up in an earlier post that discussed a display photographed by Marko Mikkilä. 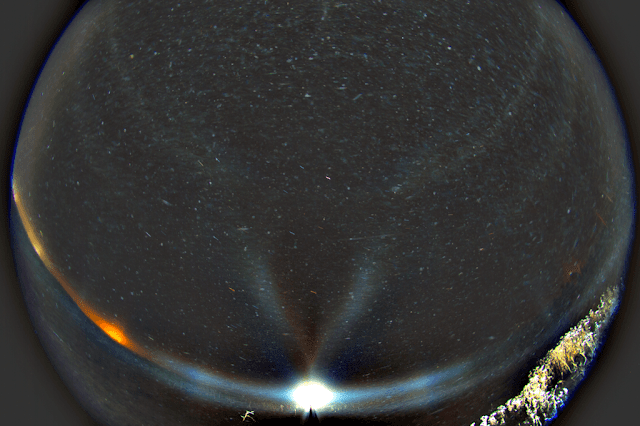