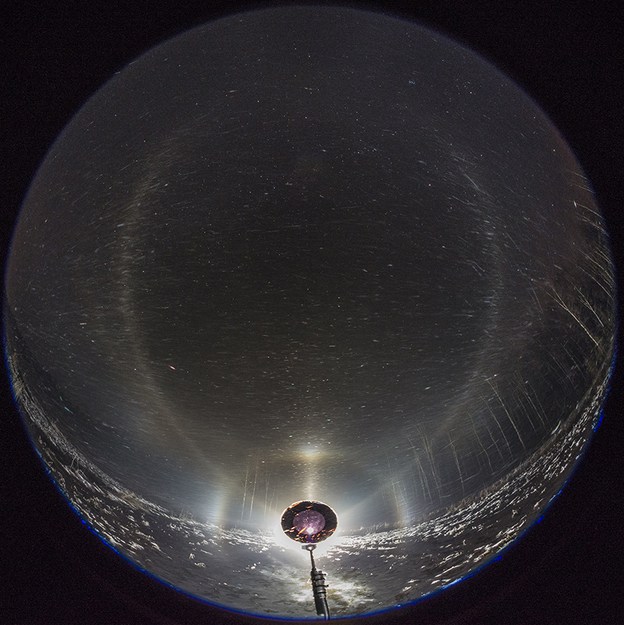 However, in spotlight displays where lamp is at or below the horizon, we have managed to photograph during the last and this winter a several of cases that are suggestive of an uppervex Hastings. And not even suggestive, but outright assertive.

The uppervex Hastings intensifies with lowering light source elevation, only complication is that it then starts to overlap with Wegener and identification must be done on the basis of other halos in the display. If Parry orientation halos are prominent and column orientation halos such as 46° lateral arcs, diffuse arcs and subhelic and Tricker arc are very weak or absent, then we might say that the “Hastgener” in the display is indeed Hastings arc.

As an example of a display that leaves little doubt of its Hastings nature, here is shown a one that Marko Mikkilä observed this year, on the 2nd January in Sievi. The lamp was resting on the ground on a rather level field and is according to Mikkilä about 3 degrees below the camera.

We see no evidence of column orientation – no 46° lateral arcs, no Tricker, no subhelic arc. Instead, in the image there is an overwhelming helic arc and Tape arcs, which both are solely Parry orientation born. Thus the faint “Hastgener” must be an uppervex Hastings arc, rather than Wegener.

Above is a attempt at simulating with HaloPoint. It supports the Parry scenario untarnished by columns, even though the details may not be quite right. Perhaps the most striking mismatch is with the subanthelic arc, which is bright in simulation but seems to be missing from the photo. However, there is a darker area which looks as if shaped by subanthelic arc. This seems to be a real effect, we have seen similar looking dark voids inside anthelic arcs before and in an upcoming post I will be showing a good example of such darkness associated with this halo. Perhaps the more intense parts of subanthelic arc are outside left outside of Mikkilä’s photo, although in that case it should have been possible to make a matching simulation. I actually did find an option which was better in that respect, but other parts got too wrong to take it seriously.

An earlier display in the same location by Mikkilä seems to also contain a pure uppervex Hastings. 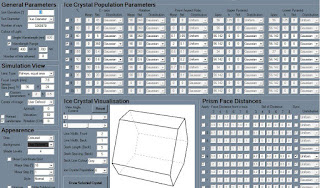