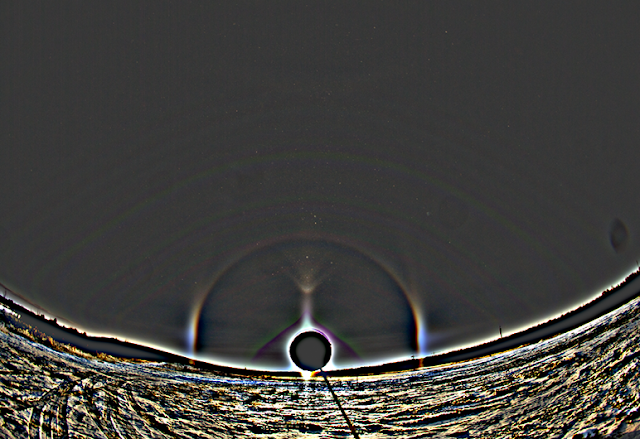 A simple diamond dust display that I photographed on the 6th of this month in Rovaniemi, shows above the Moilanen arc another, weaker V-shape. As I uploaded the photo on Taivaanvahti, I was not conscious of the effect, it caught the sharp eye of Panu Lahtinen and Reima Eresmaa who commented on it. Then some photo processing made it stand out more clearly. The version above was worked by Nicolas Lefaudeux. It is a stack of 13 images taken during 125 seconds.


If the effect is indeed real, it can not be accounted for by any known halos. At 10:26-10:27 am when the photos were taken, sun was too high (5.6-5.7 degrees) for reflected Parry to explain it and there is no normal Parry arc or tangent arc in any case.

Soon after I posted the photo on Taivaanvahti, it turned out this has been recognized already years earlier. Marko Mikkilä and Jari Luomanen photographed displays with a brightening above the Moilanen arc, respectively in 2007 and 2014. Both had informed other enthusiasts about the effect in their images, but these failed to create excitement at the time. Now, with the latest display’s somewhat better defined V-shaped arc, these older observations certainly deserve a new look.

One more case of interest is that by Timo Martola in the township of Janakkala last winter. His display contains a V-shaped arc above Moilanen arc, however, because the sun elevation is just right for reflected Parry (4 degrees) and there is also normal Parry and tangent arc, everyone has been content with reflected Parry explanation. Probably that’s what it really is, the display looks much like an earlier one that has a definitive reflected Parry. But with the new observation, we can now entertain the possibility of another explanation for the arc in Martola’s images.

A search of all Moilanen arc photos would be in place to see if more candidates turn up.