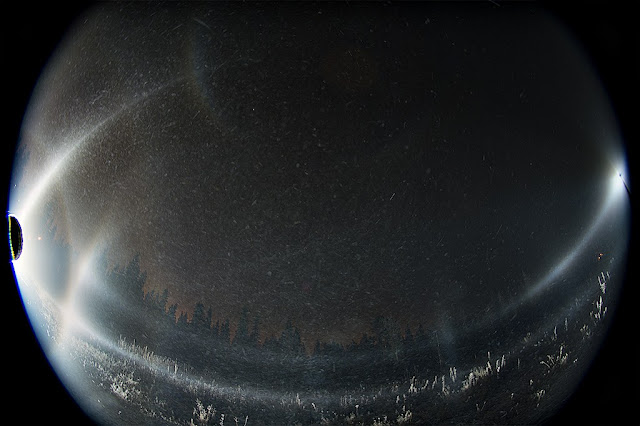 Showcasing the last winter’s spotlight displays is still under way, but fresh produce is already coming in. Here is the new crop that I harvested on the evening of 5th November in Rovaniemi. In the image above the lamp is around -6 degrees below the horizon and both parhelic and subparhelic circle are visible. Slight intensity enhancements in them on the side of the sky opposite to the lamp are suggestive of Liljequist parhelia. Included are also Sub-Kern and sub-120° parhelion. I did not spot sub-Kern this time, but the latter was quite discernible when running alongside the beam. As usual, it was a pale pillar of light in which no individual crystals were detectable – very different from the intense subparhelic circle patch towards the subanthelic point, which is always made of pure glitter.

The display disappeared immediately when it got cloudy and there was nothing to be had for the rest of the night. What is not visible in any of the photos, but what was there many times during the display was the subanthelic diffraction pillar. Discovered by Marko Mikkilä in 2012, it is a quite basic feature in plate displays, but tends to come and go, never lasting long. So it is not necessarily captured by the camera unless you take it as your target.

The temperature was around -10 and -11 °C at the location. It is in a typical range of good plate stuff, not yet too cold.