A distinct Wegener but other reflection halos from column orientation lacking 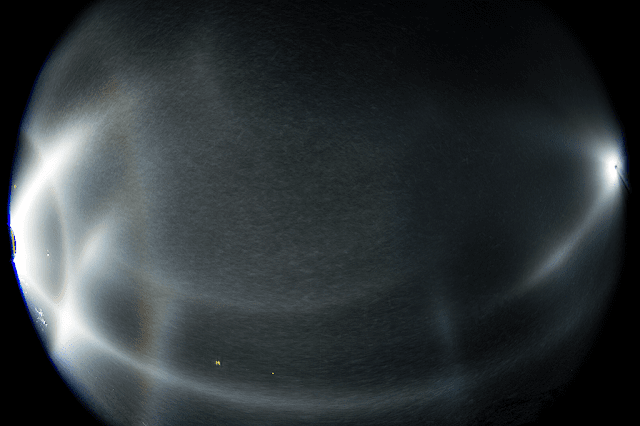 Spotlight displays are great in that almost every time you photograph them, you realize you understand halos less and less. This time the puzzle is: Why Wegener in the image above is so strong in comparison to other reflection halos? No subhelic arc is visible and neither there seems to be diffuse arc – I think the spikes at the subanthelic point are lamp artefacts. Of course I can’t not say that for sure, but around the subanthelic point even weak stuff shows up easily to the eye, so had there been diffuse arcs, I should have noticed it. If we accept this, then, in addition to the Wegener, the only suggestion of column reflection halos is what looks like a short patch of Tricker arc cutting across the sub-Kern arc (see the simulation below for comparison).

As for the posed question, I don’t have an answer. In simulations, using plate like column oriented crystals weakens subhelic and diffuse arcs in relation to Wegener, but they are still well visible, as shown by the simulation in the image below, which was done, I think, with h/d 0.3 plates. 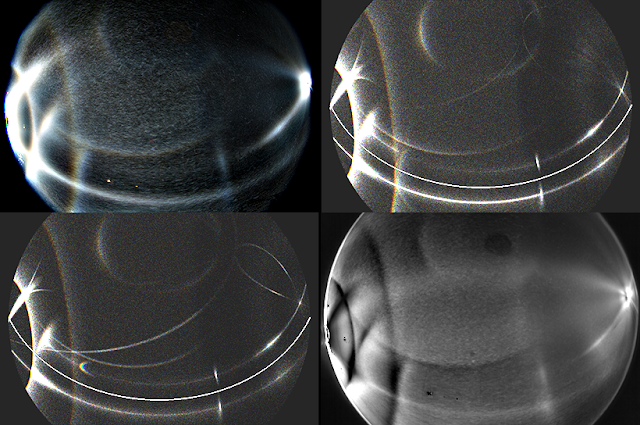 Of the other stuff worth a mention in the image – which is a total of 27 min 20 sec exposure – is the sub-120° parhelion. It is quite common in spotlight displays, but to see it one typically has to run alonside the beam. This time it was clearly visible while standing still. There is also a blue spot. At 9 degree elevation it shares exactly the same location with 120° parhelion, which may be there too.

Another photo taken a bit later and at another location, shows a dark circular void at the zenith (or nadir, if you look from the point of view of halos), as shown below. A much more striking instance of this effect was captured by Jari Luomanen in 2013. 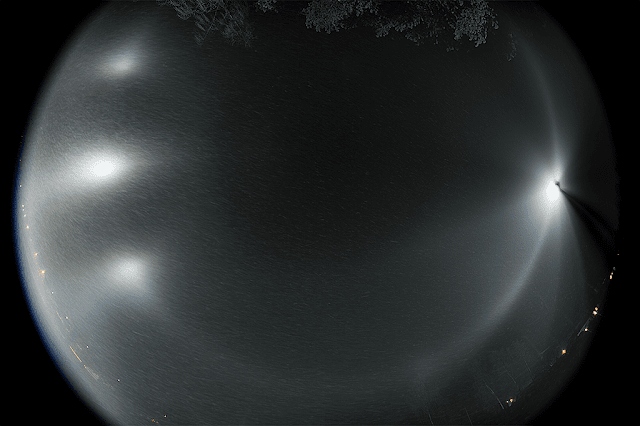 This night of halo hunt started on 8 November at 10 pm and lasted until 5 am. The development of the diamond dust quality was a slow and hopeless decline, which happens quite often when temperatures drop towards -15 °C. That is considered by halo hunters the worst temperature, giving crappy displays. Unfortunately the temperature notes were lost as my halo hunting diary got corrupted and shows now page after page ####s instead of letters. But I think it was between -11 and -14 °C through the night.