By Jarmo Moilanen and Marko Riikonen

The diamond dust season is soon to arrive in Finland and it is time to wipe the dust off the equipment. In a meanwhile, here is the last winter’s starter for Rovaniemi, on October 30 2015. The temperature during the display was -5° C, a guaranteed number for great stuff.


So, what do we have here? First of all, visually the upper tangent arc was a breathtaking sight. In addition to its brightness, the myriads of moving crystals made it “swarm”, as if it were alive. The subhelic arc was also intense.

Then take a look at the zenith. There is an intensity threshold very familiar from spotlight displays, which we have been calling the 87° arc and which is made by 357 raypaths in rotating columnar crystals of triangular habit. Perhaps surprisingly, this is only the first time it has been observed with traditional light source. Most likely it would have been observable in some earlier photographed solar displays, but usually the photos don’t offer the luxury of all sky views.

We spotted 87° arc first visually, which we were quite happy about, as often faint effects only turn out from photos. Sun was behind the hill and not shining where we were standing, but some way up the crystals were lit. We saw crystal glitter on the sun half of the sky, cutting off abruptly at the zenith, leaving no glitter whatsoever on the opposite side.


Another feature of interest is the dark band between the Parry arc and the 46° halo. A simulation with HaloPoint having four populations of columnar crystals reproduced it quite well. Its formation is contributed by the 87° arc, 46° halo, Parry and 22° tangent arc. Crucial was making the area between Parry and tangent arc to have plenty of light by giving the four populations a continuum of limited rotations. Also, to enhance the upper edge of the gap it was necessary to keep 87° arc from extending inside 46° halo. The triangular column population with 10 degrees rotation did the work (the uppermost active population in the parameter table – number 3). Fully spinning crystals would have extended the 87° arc all the way to the sun. 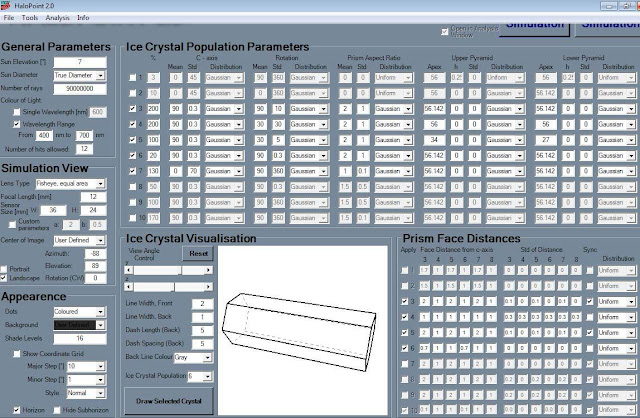 Assuming the live crystal sample of this display is representative, we see that most crystals have end cavities and yet the subhelic arc (that uses both basal ends) is striking. According to the traditional picture, hollows are bad for halos, but this is not the first display to shake that belief, and actually simulations with column oriented crystals by Nicolas Lefaudeux in 2011 using idealized hexagonal cavities boosted the subhelic and particularly the Tricker arc. But then there are column displays where cavities seem to do their expected work and all rare halos are absent (we will post an example later). So it looks like it might not be a question of whether there are hollows, but rather of what kind of hollows there are. 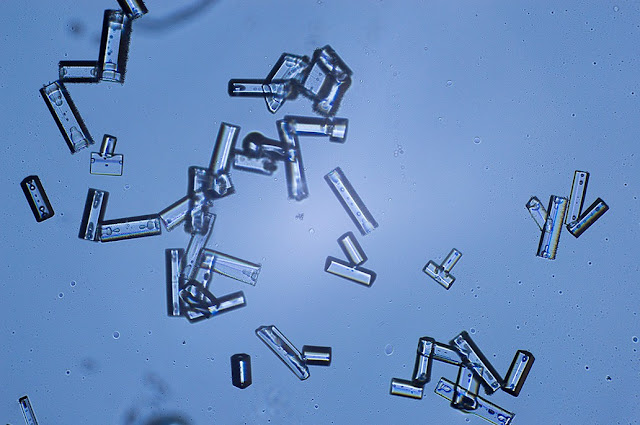 Or maybe in nature the cavities are always bad, but in this case there were enough optically high quality crystals to make the strong subhelic arc. After all, not all crystals in the sample have cavities or the cavities are so small that their effect is negligible. It is also possible that there was more high quality crystals in the display than the sample lets us know – if they were small, we don’t see them much in the collecting dish because larger crystals have faster falling velocities and will dominate the sample.