Diamond dust halos in spotlight beam in the evening of December 2, 2015 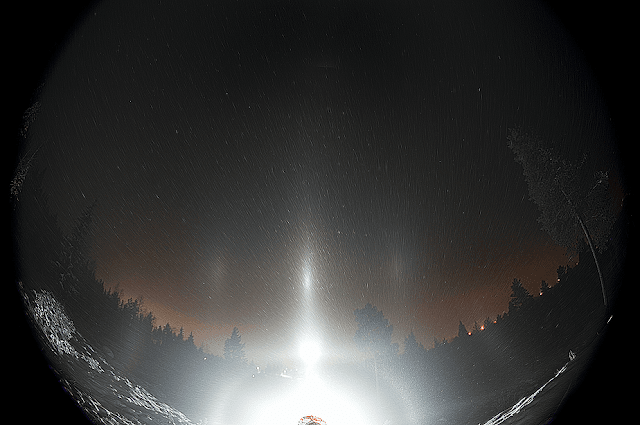 By Marko Riikonen and Olli Sälevä

Here are shown the rest of the photos from the night that yielded the second capture of the anomalous Wegener/Hastings. From the golf course parking lot, where we took those photos, we walked into the golf course, and were able to place the lamp even lower down.

The display was no more as good, but in the photo above and two below there is nevertheless again visible a short patch of Wegener/Hastings on top of the 22° halo. Whether this one has an anomalous curvature, is hard to say. Judging from the 46° stuff that is seen against the forest, the crystal orientation would rather be column than Parry, because it has the looks of a 46° infralateral arc, not Tape arc, which would be more spotlike.

The swarm shifted and we followed it to a field over the river. There we continued taking photos, as shown below, but that was cut short when the spotlight started flashing at 10 pm. The 60Ah car battery had run out of power and it was game over for the night. 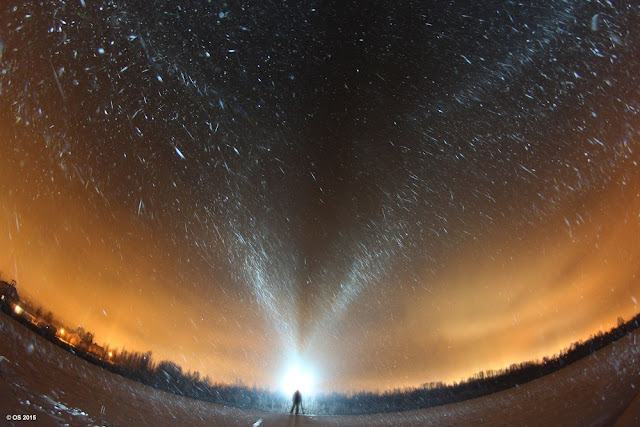 It was painful because the conditions seemed to continue at least for the next five hours and probably even amping up as the temperature rose from -11 to -5 °C. Under clear skies such a warming would have killed the diamond dust, but now it was overcast and the clouds kept hanging low, meaning they were likely nucleated to ice by the snow guns.

From this on the winter’s halo hunt continued with two batteries, but on one cold night in January even that was not enough. That time, however, a helping hand was extended by the Ounasvaara ski center folks, who borrowed one of their batteries.
Posted by The Halo Vault at 17:13