Helic and Tape arc in Cirrus

In the afternoon of October 14, I observed a large halo display in Bochum, Germany.
It started at 14.25 CET (15.25 CEST) with circumzenithal and supralateral arc. During the following minutes, also the upper tangent arc, a bright Parry arc and the 22°-halo appeared, followed by both sundogs and a faint upper circular Lowitz arc on the left side. ( 1 )

At 14.50 CET, I noticed a conspicuous white arc, forming a circle around the zenith together with the CZA. A closer look showed that this circle was not really circular, but rather had the shape of an American football.

After 15.00 CET, the halo display slowly vanished, but before it faded away, left Lowitz arc was visible for about 10 minutes, as well as a very bright part of the parhelic circle. The display ended at 15.25 CET, having showed 10 different types of haloes with up to 8 being visible at the same time. 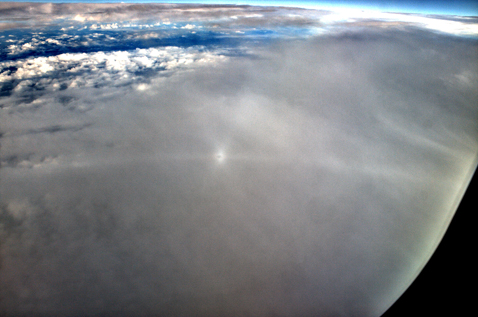 I took these pictures during the beginning of a flight from Paris to Washington DC on the 18th of September. It shows the subanthelic area. At first the subanthelion appeared alone ( 1 ).

Then a short time later subparhelic circle and diffused arcs appeared too for about 1 minute ( 2 ).

Later on the flight, I could observe some brightening in the subanthelic area but not as conspicuous as in the beginning of the flight

Nicolas Lefaudeux
Posted by The Halo Vault at 12:36 No comments: