"Upper parhelia" over the Alps 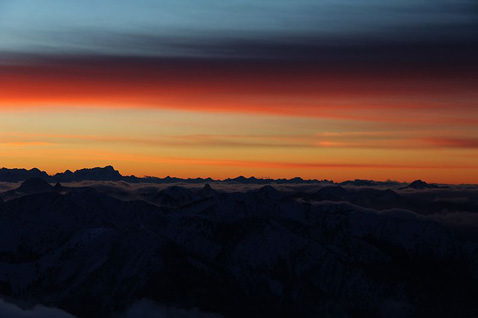 On 13 December it was cold and windy on Mt. Wendelstein (1838m) in the German Alps with temperature of -17°C and huminity over 90%. The whole day ice dentrids glittered in the air ( 1 ). For 6 hours I could observe a partly bright subsun ( 2 ). Actually I've seen 2 subsuns in time, the "main subsun" at a lower blanket of clouds and a second displaces a bit to the right in near crystals, based on tilted ice plates (caused by the wind). It was very difficult to photograph it because of the radiant brightness of "main subsun", but you can see the second, as the "main subsun" disappeared a short time. ( 3 - 4 - 5 )

Partly shaped imaginary arcs on this: ( 6 )

A short time before sunset in a single cirrus cloud was formed a colourful parhelia. ( 7 - 8 - 9 )

I've not a explanation for this. I've observed a little displaced parhelia in far-off Cirrus (1-2deg) a couple of times, but never before such a clear sundog to this negative altitude.

Claudia Hinz
Posted by The Halo Vault at 10:07 9 comments:

This one was seen from automatic gas station lights. The helic arc is rises diagonally from the lamp. I was desperately looking for a place for the spotlight, but the surroundings were totally light polluted. Just 300-400 meters away it was totally dark wilderness, though, but the diamond dust never reached there.  So I just photographed the halos in this light. I walked closer to see if I could see 3D structure in helic arc, but as expected, it disappeared.  The tangent arc had no seagull shape at the appropriate lamp elevation, indicating presence of Parry arc, which certainly was there.  The helic arc is doubled because there are two lights.
Posted by The Halo Vault at 20:16 No comments:

This one came as an almost complete surprise. I had seen moment before parhelia from streetlight when driving, but they were weak. The pillars were almost non existent, so when I parked at the hospital area and turned on the long lights, I was surprised to see the crystals glitter in the beam in a very much all sky display manner. This was confirmed as I walked the beam.

Taking on the spotlight took some time and I did not get much photos. There was also serious light pollution. Just a bit further away towards the lake it would have been darker, but you have to take the first photos where ever the display is, or you risk not getting photos at all (this wisdom Luomanen told me recently).

Simulations of the display are made with Jukka Ruoskanen's HaloPoint 2.0. The most interesting point to me is the 5 degree rotational Parry population that had to be used to get the intensity of the diffuse B arc right. Nothing new here, of course, this kind of effect is pretty common in the spotlight displays. Lessen the rotation and they turn into subanthelic arcs. The Parry population makes also right kind of brightenings at Tape arc locations. Should they be called Tape arcs or 46° supralateral arc, is probably a matter of taste.

In simulation the subhelic /helic arc (they overlap at 0° light elevation)  is too intense as always. Perhaps the Lefadeux hollowed crystal simulations could fix it.  I have included also simulations showing the diffuse anthelic arc A and B components (well, actually they are independent halos), which are clearly discerned in the photo. In sun displays these are less easy to distinguish, which is why we normally talk only about the diffuse arcs.

Temperature was around -22° C. It is rather unusual to get column (or Parry) stuff at these temps.
Posted by The Halo Vault at 21:55 1 comment:

Some stuff from the night of 11/12. December 2010 with Luomanen. We took replicas of the Moilanen arc display, but they failed. Could have been an enlightening case.  On the windshieldd there was also parhelic circle, cza, cha - the usual stuff. Luomanen is holding the lamp.
Posted by The Halo Vault at 20:27 No comments:

Mustavuori snowguns made this display. Some driving around and quick stops were involved as the diamond dust changed its location. Moilanen arc occurred on two stages, better second time. The photos of it above are 101 and 120 seconds stacks with 43 and 52 frames respectively. Crystal sample was taken, but too late, the display started soon vanish as I got the dish out. There were not much crystals in the sample and nothing special shows up in the two photos.

There is faint helic arc but no Parry arc (not even with heavy usm). Helic arc occurs pretty much in any diamond dust halo display. It has been seen even with sun pillar only. The question is what kind of helic arcs these non-Parry occurrences are? Do they arise from the same angle as Parry helic arc? If not, how many different helic arcs there are? Should probably compare this one with simulations, it comes out pretty strong with heavy usm (checked that, it has the same angle as normal helic arc).

The photos with sun in it has a pretty strong overexposed area. I have had Nikon D70 for about 5 years and this has always been the problem. Only now I realized that blocking the sun is the cure for it. So, in the future photos there will always be blocker. Actually, it is good to stack even the smooth diamond dust displays. Earlier I did not think it would help much, but it does.
Posted by The Halo Vault at 11:00 No comments:

Halos from column orientation were the main feature of this night in Tampere. In the beginning I was looking at the display with Luomanen but we did not have cameras. The display sort of took us off guard, it was thickly overcast and temperature at -5 C.  Anyway, Y-pillars were visible in Hervanta and we got crystal replicas at least.  Closer to the streelights beautiful circumscribed halos appreared, but it looked like there was some tilt involved. Columns with hollow ends in the replicas.

Later I continued on my own and took photos under streelight near Mustavuori.  Took also crystal photos - the crystals have become more equidimensional (the temp also had dropped to -7 C). Plenty of triangles (the photos above are all from this live sample) which probably have been falling in Parry orientation but Parry was impossible to distinquish under the lamp. Certainly triangular thick plates do not take plate orientations because there was no sign of plate halos in this display. Kern from triangular plates is only theoretical consideration.

For the last I went back to Hervanta where I photographed the Y-halo from the police training area floodlight. Also helic arc is visible. At some place there was also parhelia. The display lasted several hours and who knows how long it had been going on before we entered the scene.

Helic and Wegener from Brandbergen 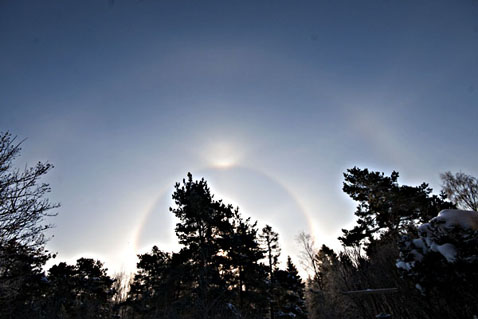 The halo was observed in Brandbergen 20 km south of Stockholm Sweden. Time for the display was 1-dec-10 9:50 - 10:50 AM. There were snow guns running at two ski-slopes both of them 20 km away. I don’t know if they had some influence.

More images can be seen if you click on the image above.

Mats Mattsson
Posted by The Halo Vault at 18:15 2 comments:

The moon halo display vanished as it got eventually overcast. It was still low stratus with occasional fog on the ground, but apparently the moisture just became too much for the snow guns' ice dust to nucleate a hole. Diamond dust nevertheless continued under cloudy skies and I turned on the spotlight. It was rather good, plate crystals still in charge and with negative elevation lamp (about 11° below horizon) there appeared several "super"-halos (equal to "sub"-halos when light is above the horizon). All were visible to the naked eye, the superparhelic circle at the superanthelic region was bright. At its best the superparhelic circle extended all the way to the superparhelia but I did not get that stage photographed. At the same time was also normal parhelic circle visible.  I though of seeing a ghost of super-120° parhelion, but decided it was just white snow on the far hill. In the photos, however, super-120° parhelia are visible in a similar ghostly manner, so probably that was what I saw.

Getting these photos was mostly waiting. Mainly it was water fog, but then, for maximum few minutes at a time good crystal swarms swept by. In one exposure both water fog and diamond dust stage was captured so that there is also fogbow visible. In reality halos and fogbow were not much visible at the same time. Water fog and diamond dust don't just occur simultaneously. Eventually it got worse and I headed back to Joensuu. But on the way there was diamond dust at the quarry, 7 km as the crow flies from Mustavaara. So I took some photos there as well, climbing up a gravel mountain, leaving the lamp at the bottom and thus obtaining about 35° negative light source elevation.
Posted by The Halo Vault at 20:22 No comments:

This display was a result of low Stratus turning into ice crystals. It was right on when I arrived with car to the scene, which made me regret my idling in the comfort of indoors. The nucleating agent was the ice dust from Mustavaara snowguns. Essentially this created a punch hole in the cloud layer. All around this few kilometers wide opening it was overcast. Moon was three days short of full and an all sky plate crystal display was seen. The best of the crystal swarm moved back and forth and I tried to follow it with car.
Posted by The Halo Vault at 11:03 No comments: