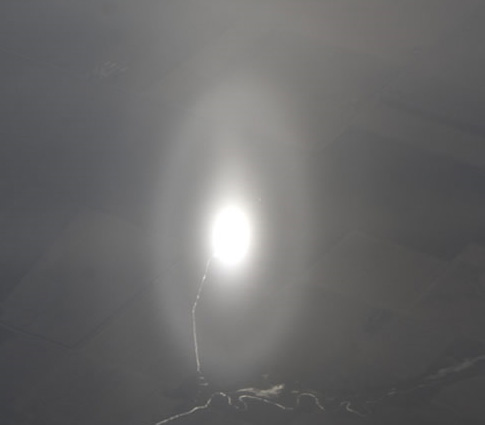 At last they are here: good photographs of Bottlinger's rings! Tim Stone's images of Bottlinger's rings over Illinois were published today in Les Cowley's site ( 1 ). The rings lasted only for a few seconds, but luckily Stone was already taking photos of the subsun when the rings appeared, and the phenomenon became captured.

The original observation was made by C. F. Bottlinger during an air balloon flight on 13 March 1909 over Göttingen, Germany ( 2 ). The phenomenon lasted long, from 1 to 1½ hours. Bottlinger suggested that the ring could form from a reflection in crystals falling in pendulum motion. Computer simulations by Lynch et. al. in 1994 ( 3 ) showed, however, that this motion would produce uniform elliptical glow instead of defined ring. As an alternative they suggested plate crystals in gyration motion for the explanation.

A photograph taken by Claudia Hinz ( 4 ) also clearly proves that elliptical halos are not reflections of Bottlinger's rings. These two halos have not been observed simultaneously, but an almost simultaneous observation was made by Leena Virta and I in 1999 in Resolute Bay, Canada. We observed Bottlinger's rings from an airplane that was flying under the Ac cloud layer and when the plane landed, the same cloud showed elliptical halos around the sun.

Tim Stone's photos show also fainter ring outside the main ring. Assuming the gyration explanation this would require two ice crystal populations with constant inclination angles. It will be interesting to try to simulate this with pyramidal crystal model. Les has already a simulation on his site, but he says the parameters could be fine tuned. The rings' dimensions and sun elevation are provided, so anybody can give it a try!
Posted by The Halo Vault at 02:35