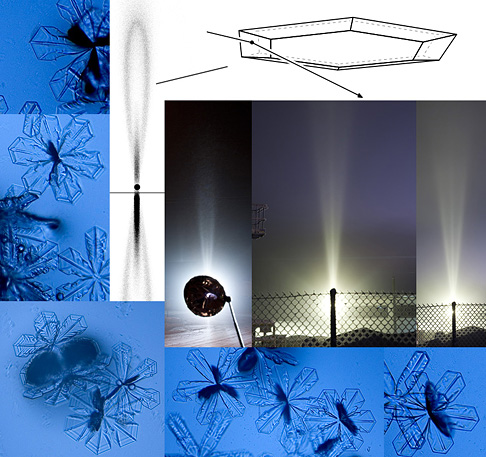 On the night of 9-10 January in Kangasala we observed light pillars that were accompanied on both sides by steeply rising arcs. These arcs were seen both with floodlights (two rightmost halo photos in the collage above) as well as with narrow beam spotlight (the leftmost photo above). In floodlights the arcs were somewhat straight, while in the spotlight beam they tapered towards each other, perhaps forming a loop around the pillar.

The display was visible for almost four hours in a very localized pocket of the Kangasala industrial area of 500 meters across at most. Atmospheric humidity was high, the area was surrounded by water fog. Probably emissions in the industrial area initiated nucleation of this fog to ice crystals. The temperature was -16 degrees Celsius.

This halo probably arises from a simple reflection from nearly horizontal crystal faces. The crystals we used in the simulation (see above image; software used: HaloPoint 2.0 beta by Jukka Ruoskanen) are similar to those used in simulating elliptical halos and Bottlinger's rings. The raypath for the halo is same as for Bottlinger's rings, except that it occurs on the lower pyramidal face. The atmospheric conditions (temperature, high humidity) support the idea of such a crystals since Bottlinger's rings and elliptical halos are mostly observed in altocumulus virga, which form in similar conditions.

Due to the halo forming raypath, this halo could be called as the super-Bottlinger if we were to adapt the naming system suggested by Walter Tape or the supra-Bottlinger in case Gunther Können’s naming system was used.

The series of images captured in the spotlight beam show variation in the angle of these new arcs. Presumably this happened because the angles of the reflecting faces changed. It had been long suspected that elliptical halo sizes can change during the display - our observation provides now supporting evidence. However, we did not observe any elliptical halos. At times an elliptical glow was suspected around streetlights but these were never confirmed by photographs.

Crystals were sampled and photographed at the same time as the display was photographed in the spotlight beam. The crystals have dendritic growth and it is difficult to see the structure responsible for the new halo. Possibly the tips of the branches are sloping. Such feature has been earlier pointed out by Walt Tape in a snow crystal photo. From the brightness variation between the pillar and the new halo in different stages of the display, we may assume that the extent of the sloping area in the crystal varies.

Additionally, the display contained diffuse helic arc like extensions from the lamp, as seen in the middle photograph. These were also observed when only pillar was visible. Possibly the abundant crossed plates were behind their formation.


Jari Luomanen, Marko Riikonen
Posted by The Halo Vault at 21:51