Lighting up a crystal glitter subsun 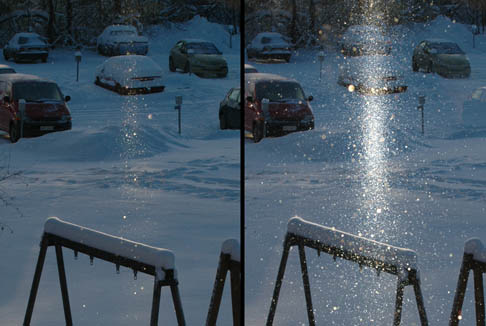 A subsun that glitters in separate crystals against the ground can look pretty nice, but in the photos it as a rule turns out a disappointment: only a few anemic glints are captured. But there is a recipe to make the image match the visual perception or go even above it. That is to stack a series of photos using the lighten method (in Photoshop).

In the image above, there is a comparison of a single photo and a lighten stack of 99 photos. The camera was on tripod and the photos were shot fast with series mode. During shooting a car was moving in the parking lot (a ghostly image of it is seen on the right in the stacked image). These frames were omitted from the series because sun's reflections from the car might have been disturbingly imprinted in the stack as the lighten mode takes always the brightest pixel of the stacked images.

Marko Riikonen
Posted by The Halo Vault at 16:12