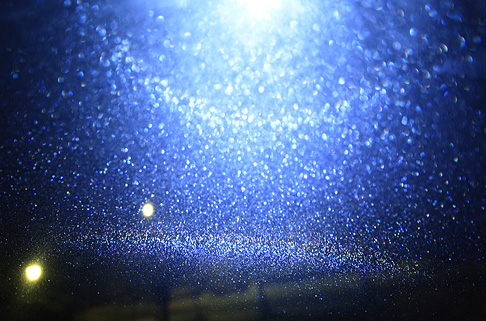 Photos and videos of the windshield halos seen on the night of 26/27 January in Tampere are now available in two galleries ( 1 - 2 ). The display was dominated by plate and Parry oriented halos. Circumzenith and circumhorizon arcs were strong as were the upper and lower suncave Parry arcs. Parhelic circle and 120° parhelia were also well developed. Less conspicuous were the subhelic arc ( 3 ), upper sunvex Parry, 46° Parry and the blue spot. Additionally, two unidentified features were seen.

We did not photograph the crystals, but we think the display was formed in frost crystals that have their basal or prism faces parallel to the windscreen. Both populations could be separate crystals, but also 90 degree crossed crystals could be a consideration. Visually the frost seemed rather grainy, which suggests compound crystals.

The halos were observed with a LED lamp pointed through the windshield as well as with reflected light (the lamp on the same side of the windshield as the observer). By moving the lamp we were able to observe in real time the transformations in halos that occur as the light source elevation changes (4). Videos show the shift between circumzenith and circumhorizon arc. There are also peculiarities. One is that the parhelia does not seem to move much further from 22 halo as the lamp elevation rises.

Both two unidentified features were documented. The other one was found from the video: in the video, far below parhelic circle at around 120 azimuth, appears a vertical pillar (5). The other effect was a diffuse arc that was seen when we lit up the windscreen from the front of the car and watched it from behind the lamp. This elusive effect was documented in a video (6).

After hours of documenting we ended the night by taking a ride and videoed the halos as they swept the windshield. As we neared a streetlamp, first one to sweep the screen upwards was the lower suncave Parry followed by circumhorizon arc. Then, as the lamp was overhead and behind, parhelic circle swept the screen downwards. If the lamps were a bit further on the side relative to our driving line, then also 120 parhelion was seen on parhelic circle.

It was a great night. In those six hours that we spent worshipping this complex display, we learned all the time more on what we were seeing and created new tricks to take photos. Certainly this winter’s top halo experience for both of us.

Marko Riikonen, Jari Luomanen
Posted by The Halo Vault at 15:02